Crude oil made big headlines this week after it crossed over the $40-a-barrel mark for the first time this year. Natural gas was actually the real story this week: It outperformed crude, fueling a big jump in the United States Natural Gas Fund (UNG -8.58%), which is an ETF that tracks its price: 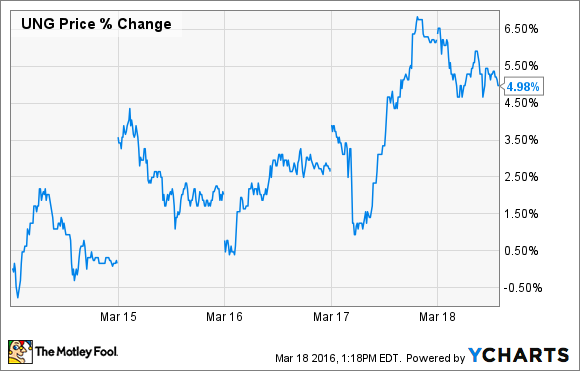 That nearly 5% move during the past five days made it the best-performing energy ETF this week. 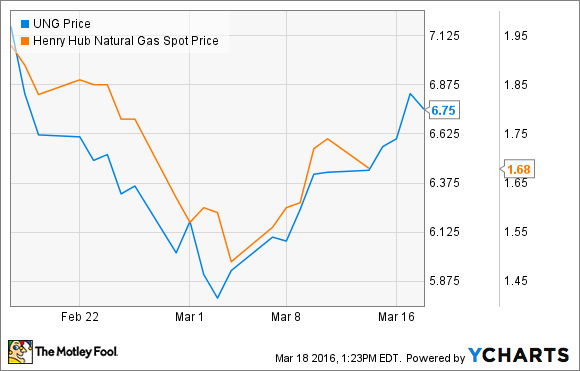 The reason traders have been growing a bit more bullish on natural gas is because producers have finally started to pull back the reigns on production growth. That should finally help ease the oversupply glut that's caused natural gas in storage to be well above the five-year average.

Companies like Chesapeake Energy (CHKA.Q), Range Resources (RRC -4.11%), Rice Energy (NYSE: RICE), and Antero Resources (AR -2.63%) have significantly cut capex spending for 2016. These spending reductions are expected to result in a slight production decline from Chesapeake Energy, along with more-moderate adjusted production growth rates from Range Resources, Rice Energy, and Antero Resources. With producers tapping the brakes on growth, it should keep supplies from growing out of control. 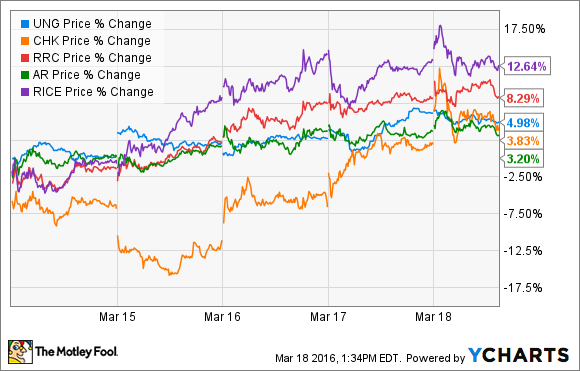 In fact, the rally in the price of natural gas was the only fuel driving the stock prices of Antero Resources, Rice Energy, and Range Resources higher this week. Chesapeake Energy did have some company-specific news after it was reported that the company was considering a new debt exchange in order to alleviate some of the pressure on its balance sheet.

Chesapeake Energy's balance-sheet woes won't be as much of an issue if natural gas continues to rally. However, that's a questionable outcome, because even though the sector has cut back spending, most producers are only moderating the rate at which their production will grow this year.

Take Range Resources, for example, which is still planning to grow its adjusted production by 8% to 10% in 2016. That's really only a slight moderation from the 20% that Range's production grew last year. Rice Energy, meanwhile, sees its production growing a robust 27% to 34% this year, though that's nowhere near the 101% surge in production it delivered last year.

Antero Resources, likewise, is moderating its production growth, expecting it to increase by 15% after delivering 18% growth in 2015. The fact that these producers are still pushing production higher amid an oversupplied market is a big reason why natural gas prices still remain depressed, and could cause this current rally to be short-lived.

Investor takeaway
The price of natural gas has recently bounced off its lows, taking natural gas ETF United States Natural Gas Fund up with it. However, the duration of the rally is highly suspect because most natural gas producers remain undaunted by low gas prices, and continue to deliver strong production growth. That could prove to be problematic down the road should supplies balloon, leading to another big drop in gas prices.