It's been a tough stretch for miners, but BHP wants you to know about some of the positives in its business

BHP Billiton Limited (ADR) (NYSE: BHP) recently reported fiscal 2015 earnings. The top- and bottom-line numbers weren't great, but that was kind of baked in the cake with commodity markets in the dumps. However, that doesn't mean the giant miner isn't finding success in other ways. Here are five key takeaways that the company wants you to know.

Check out the cash!

"Our productivity drive has generated strong cash flow; it has funded the dividend [and] reduced the net debt, and we continue to invest in everything we said we would do, in growth. --Andrew Mackenzie, CEO.

While headline earnings were down over 50% year over year, that's just one piece of the bigger puzzle.Yes, the company isn't doing as well as it once was on the bottom line, but unlike smaller rivals, it is simply pulling back—not struggling for its very survival. And its cash generation, which was down just 25% or so despite the more material earnings shortfall, is one of the factors that proves it. That's a big difference and puts the company in a position to prosper once commodity markets recover.

Cutting and growing ... at the same time
But pulling back isn't the same as stopping all growth projects. For example, according to Makenzie, "We reduced capital and exploration expenditure by 24% to $11 billion so that, at the end of the period, our solid A credit rating remains intact and net debt had fallen by 5% to $24.4 billion." But, and this is important, "Our production performance has continued to improve. We have delivered production records for iron ore, metallurgical coal, and petroleum."

Producing more of a commodity that's facing supply and price headwinds isn't necessarily great, but it sets the company up for the next upturn. That's key because mines take a lot of time and money to build. The ability to keep improving during the ebbing commodity tide is a huge benefit for a giant, financially strong miner like BHP and should allow it to gain market share from marginal miners that aren't as well positioned for a downturn.

We ain't done yet
But Mackenzie wants it to be very clear that BHP isn't done yet: "In the 2016 financial year, we will continue to reduce our costs." That's pretty much across the business. So despite having already reduced costs by a massive 30% from peak levels, the company isn't stopping.

To provide an example of what he's talking about, look at this little tidbit: "Productivity will be the only source of volume growth at Western Australia Iron Ore, where volumes are now forecast to increase by 7%." Essentially, the CEO is saying that by doing more with less, this operation will notably up its output. That takes money, but the real impetus is working smarter, not harder. This mind-set is the driving force at BHP right now, and it's showing real results.

Things will get better
It's equally important to note that the CEO doesn't seem all that worried about the commodity downturn. "We are confident in the future demand for our commodities. Cycles are part of our industry, and that makes it easier for large low-cost producers like us to move away from smaller peers." There are two takeaways here. The first is easy to understand: Mackenzie is looking to a future where commodities are selling at higher prices.

The second is more subtle and encompasses everything you've read so far: BHP sees commodity cycles as an opportunity. It's used to them and, more to the point, ready to deal with them. After more than 100 years in the business, it has this story down: Prices go up, prices go down, prices go back up -- make sure you can thrive throughout. 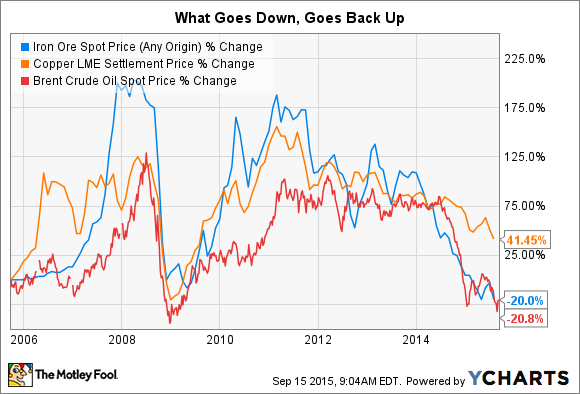 Yes, it's battening down the hatches, doing more with less, and getting leaner and meaner. But it knows from experience that there's a silver lining on this cloud and it's doing what it needs to do to benefit from it.

We are going to pay you to stick around
One of the most important takeaways from BHP's conference call might be this: "Our commitment to our progressive dividend is resolute, and this means that in every half-year reporting period, we aim to maintain or grow our dividend per share. This is a commitment which has withstood many previous cycles, and is and remains a key differentiator relative to our peers. It is testimony to the quality and diversity of our assets, and to the distinctive operational excellence and capability of our people." With that, the CEO is basically summing up what every income investor wants to hear.

The dividend, the cash flow that the company passes back to its shareholders, is important, and BHP knows it. And it's not just lip service, with over a decade of annual increases already on the books. Mackenzie clearly isn't looking to do anything to change the current trend of annual increases and is dedicated to returning value to shareholders through thick and thin. He wants you to be rewarded for being a loyal partner to BHP.

So, in the end, it wasn't a great year for BHP on the top or bottom line. But no one expected it to be. And despite the difficult market, there's a lot of good things going on behind the headline numbers. That includes operational and financial resutls. And through it all, the company wants to make sure investors know they are loved with a "progressive" dividend. This isn't a sleep well at night stock, but it may very well be one of the best miners around.