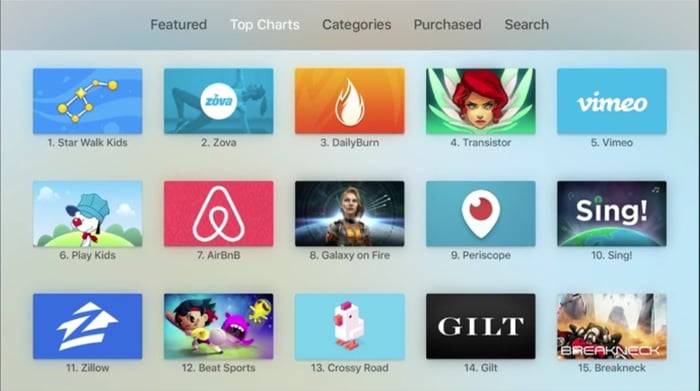 Periscope made it into a slide at Apple's September keynote. Image source: Apple Keynote

Amidst Apple's (AAPL 4.08%) launch of the new Apple TV during its September event, Apple announced that the new tvOS would support an app store. And while it featured developers and presentations of several apps, we saw glimpses of several more in Apple's slides. One app that looks ready for the launch of the new Apple TV is Periscope, the live streaming app bought by Twitter (TWTR 1.65%) earlier this year.

An Apple TV app makes perfect sense for Periscope, which says it has 10 million registered users watching over 40 years' worth of content every day. Likewise, Apple can benefit greatly from having the live streaming app on its new living room hardware.

Apple TV could be a kingmaker
Twitter's Periscope is facing multiple competitors in the user-generated live streaming market. Meerkat made it to market just weeks before Periscope and was able to gather a sizable user base. Facebook launched a live streaming app for verified accounts from celebrities, athletes, and journalists. Still, Periscope remains the leader in the space.

Apple TV will be the first device that supports displaying any of these live streaming apps on a big screen. Periscope is slated to be in the app store at launch, and it could do some good in extending the apps reach. Many new Apple TV buyers will be eager to check out the app store, and Periscope looks like it will be featured based on the slides from Apple's keynote.

People downloading the app on Apple TV could encourage content makers to produce more content or create higher production value for each live stream that they do, setting off a chain reaction that puts Periscope a tier above the growing competition for live streaming apps from big tech companies.

Periscope can help Apple redefine TV
A key part of Apple's presentation was that users can call up Siri to search for content across multiple apps. That essentially puts smaller apps on par with big companies like YouTube or HBO when it comes to discovering new content. That's another benefit for Periscope launching early on the Apple TV.

Organizing content and making it easy to find on the TV is the real problem Apple is trying to solve with this version of the Apple TV. The inclusion of apps like Periscope and smaller video and entertainment developers will provide Apple with tons of content to serve up to Apple TV users. And that means less time watching traditional television.

As a result, Periscope and other developers could provide Apple some leverage in its negotiations with television media companies to create the over-the-top streaming television bundle that's been rumored since this spring. The biggest holdup in negotiations is reportedly local broadcast channels, which the major broadcast networks typically don't have much control over.

However, losing viewership to other apps on Apple TV could be the motivation broadcasters need to exercise their limited control over local stations and complete the Apple TV bundle. That would allow live broadcasts and typical on-demand content to be included in Siri's search results in addition to Periscope or Hulu content. With a launch expected sometime next year, Apple has several months to get users downloading and using Apple TV apps.

Differentiating Apple TV
The inclusion of apps like Periscopes on Apple TV serves to further differentiate the device from a growing number of competitors. Apple previously limited who could develop apps for Apple TV, but the doors are now wide open. Apple TV was already one of the most widely used set-top boxes, but the open app ecosystem could convince more customers to choose the device.

Apple is positioning the new Apple TV as a premium device, priced at $149, well above the next most expensive set-top box on the market. It's also more than twice as expensive as the previous Apple TV. In order to sell units, Apple needs the support of new apps (and games) like Periscope to differentiate its product and justify its premium pricing.