Please ensure Javascript is enabled for purposes of website accessibility
Log In Help Join The Motley Fool
Free Article Join Over 1 Million Premium Members And Get More In-Depth Stock Guidance and Research
By Travis Hoium - Sep 21, 2015 at 11:25AM

This growth stock is up big today, but buyer beware.

What: Shares of Plug Power Inc (PLUG 8.82%) have surged as much as 23% today on speculation that another big customer could add hundreds of millions in backlog for the company.

This kind of speculation has been around with Plug Power for two years now, and it's a chase investors shouldn't make. Below is the chart of the stock's performance since the day before Plug Power announced that Wal-Mart was buying over 1,700 units from the company, bringing speculation that the world's largest retailer could switch to hydrogen-powered forklifts. You can see that buying on that news and growth speculation hasn't worked out well for investors. 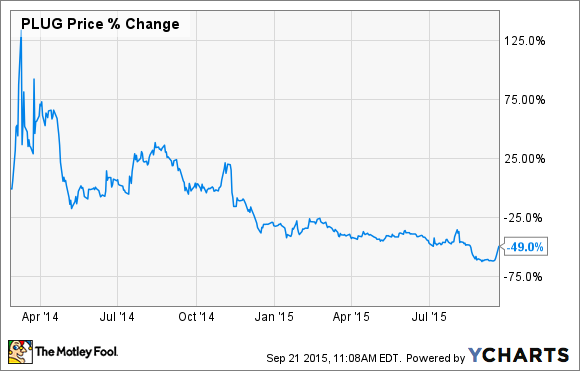 Now what: The challenge for Plug Power is that the company hasn't been able to turn orders into profit and hasn't built a strong competitive moat around its product. Remember that GenDrive is essentially retrofit into existing manufacturers' products, so Plug Power could easily be shut out of the industry's growth potential if manufacturers like Raymond decide to make a hydrogen product themselves.

Building a model that shows billions in potential revenue is great, but Plug Power hasn't shown the ability to make money and doesn't have a product with a competitive advantage in the market. So, I can't see buying today's speculation, even if it's a nice-sounding story for investors.