The open-source software veteran keeps outdoing its own best-guess estimates, to say nothing of Wall Street's projections. Here's how.

The open-source software vendor came through with flying colors. Adjusted earnings rose 15% to land at $0.47 per share, easily beating the Street's projections. On the top line, sales increased 13% to $504 million.

But Red Hat did more than just surprise the Wall Street crowd. The consensus was roughly in line with Red Hat's official guidance, which means that the company managed to exceed its own expectations.

In a one-on-one call with CEO Jim Whitehurst, I pointed out that Red Hat has beaten earnings estimates in each of the last 11 quarters. Are guidance targets easily reachable on purpose or is there something else going on?

"Our public cloud business is reported in arrears, making it more of a real-time revenue stream than the long-term contracts we do for everything else," he said. "So most of our business is fairly transparent, since we have commitments in advance. But for cloud sales, it's kind of harder to forecast. And that's where we're seeing strong growth these days."

Sales of public cloud products and services reached an annual run rate of $100 million this quarter, marking it the first time that Red Hat discloses a dollar figure for that business. It's an emerging product category, and the main driver behind Red Hat's surprises on the top and bottom lines.

Looking ahead, Red Hat raised its full-year guidance targets by approximately 2% and set third-quarter goals slightly above Wall Street's estimates. The company is hiring engineers and sales staff about as quickly as it can write up new job descriptions, increasing the head count by 8% year to date.

I kind of hate to leave on a completely positive note, since it's always healthy to consider the downsides and challenges. Honestly, I can't come up with any nits to pick here. There's the old chestnut of breaking Linux and open-source software into the mainstream. Red Hat's shares didn't jump on this announcement despite strong results and solid guidance, signaling a fairly saturated share price. But that's about it.

So I'll just leave you on an almost uncomfortably upbeat note. In the second quarter, Red Hat did absolutely nothing to undermine my positive view of the company and stock. Sales have more than doubled over the last five years while free cash flows nearly tripled, and there's no end in sight to the growth runway up ahead. 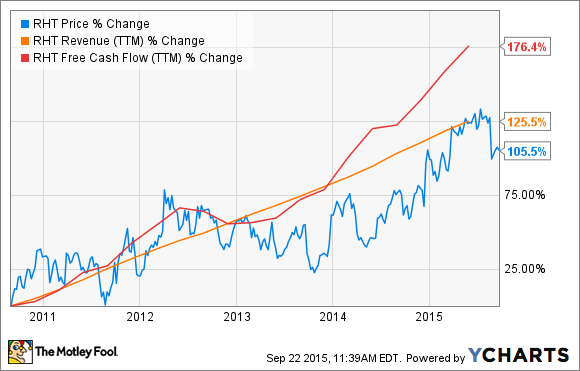