Checking to see if Enterprise Products Partners L.P. checks every box of the best characteristics of a master limited partnership.

After having invested in and followed the energy sector for several years, I put together a list of five key characteristics investors should seek in a master limited partnership. While it's a rough guide, ideally a potential MLP investment would have a healthy dose of all five characteristics. With that in mind, I'm putting my longtime holding Enterprise Products Partners L.P. (EPD 0.04%) to the test to see if it passes with flying colors.

1. A bounty of fee-based assets
The perfect MLP should be loaded with fee-based assets. Ideally, it would generate all its income from fees, but anything over 75% is acceptable.

Enterprise Products Partners does highlight that it operates a diversified business that is predominantly fee-based. Having said that, the company does not break down the percentage of its revenue that is fee-based. At one time it did, as an investor presentation from late 2012 noted the company expected that 80% of its gross margin would be from fee-based assets in 2013, which was up from just 77% the year before. Further, the company noted on a recent investor presentation that it invests predominantly in fee-based assets to further solidify its cash flow. So, it is pretty safe to assume that Enterprise's cash flow is very well supported by a bounty of fee-based assets.

2. A solid balance sheet
The perfect MLP would have an investment grade credit rating and/or a debt-to-EBITDA ratio of 4.0 times or less. Here, Enterprise is as close to perfect as we'll see as it has one of the highest credit ratings among MLPs as it's rated Baa1/BBB+. It has maintained that strong credit rating by keeping its debt-to-adjusted EBITDA ratio below 4.0 times, which is clear from the chart below. 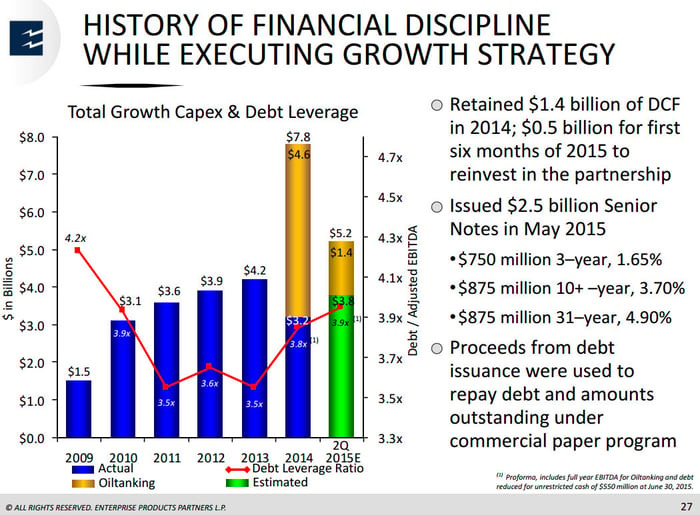 While its leverage ratio has bumped up in recent years, that's largely due to the fact that the company has invested billions on growth, both via acquisitions and organic expansion projects. Even with that spending its balance sheet is still rock-solid.

Enterprise has that and more as its distribution coverage ratio is a very robust 1.4 times. That's by design as the company maintains a much larger margin of safety than its peers as it has chosen to instead retain cash flow each quarter to invest in growth projects. It uses that cash to supplement its equity and debt issuances, to keep both in check. 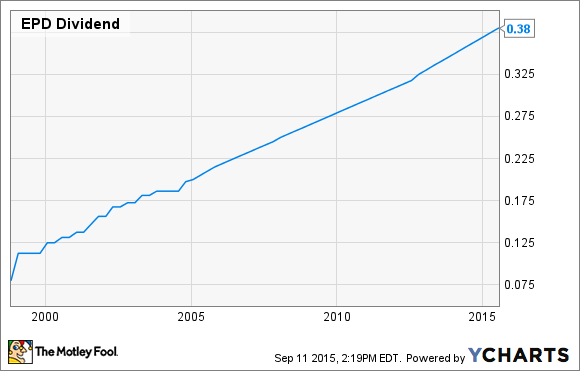 Investors will be hard-pressed to find a company more consistent than that.

5. A visible growth project backlog
At the moment, Enterprise Products Partners has $8.3 billion in projects under construction, which it expects to complete by 2017. That's a very clearly visible growth backlog, which should provide the company plenty of fuel to continue to increase its distribution.

One thing I will note is that its backlog isn't as visibly large as some of its peers that have backlogs that are worth tens of billions of dollars. That said, we need to keep in mind that Enterprise's projects are actually under construction and not just projects that it hopes to build in the future.

Investor takeaway
The verdict is in and Enterprise Products Partners is about as perfect an MLP that one will find in the market. It has everything an investor could want as it has rock-solid financials along with very visible future growth to keep its distribution heading higher.