Please ensure Javascript is enabled for purposes of website accessibility
Log In Help Join The Motley Fool
Free Article Join Over 1 Million Premium Members And Get More In-Depth Stock Guidance and Research
By Adam Levy - Sep 22, 2015 at 9:25AM

Listeners can now pay $0.99 for a full day of Pandora without ads. 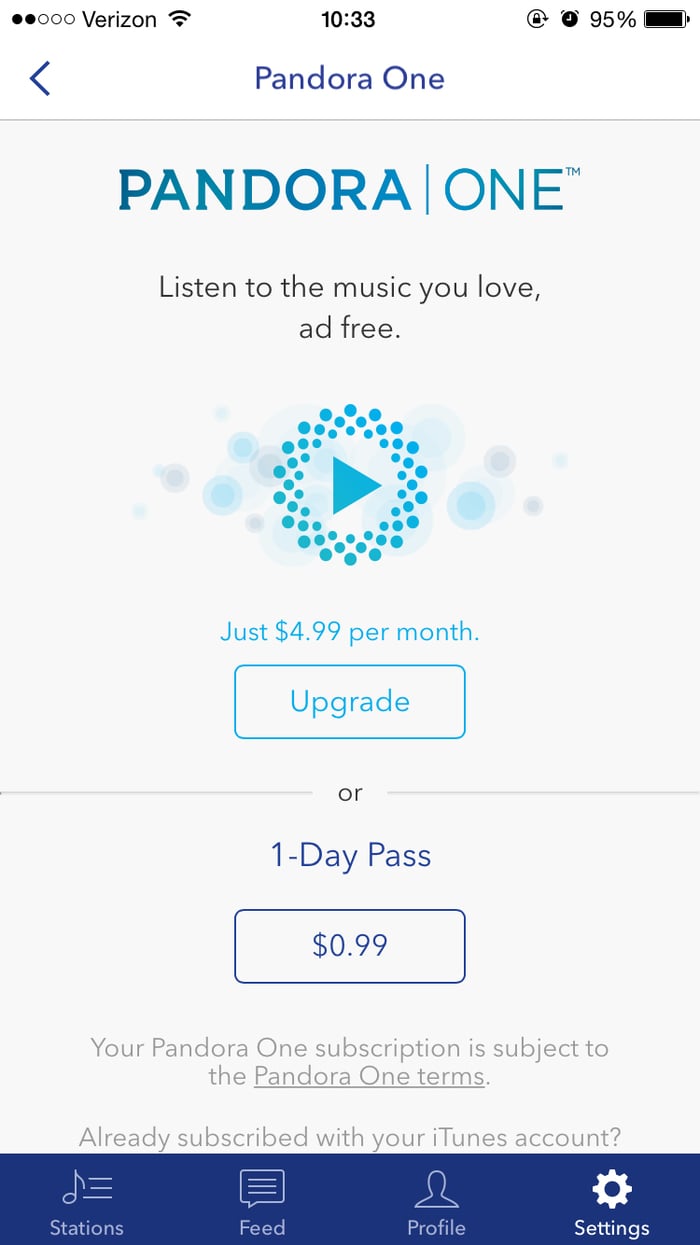 Pandora (P) recently celebrated its 10-year anniversary by offering listeners the opportunity to listen to their favorite radio stations completely ad-free. The Internet radio company used the promotion as a launch pad for a new service called Pandora One Day Pass. As the name implies, Pandora One Day Pass allows listeners ad-free access to Pandora for 24 hours as well as the other features Pandora's monthly subscribers receive, such as skipping more songs.

A One Day Pass will cost just $0.99 compared with Pandora's monthly subscription price of $4.99 per month.

The move comes at a time when Pandora is facing ever more competition in the streaming music space. Apple offersfree streaming of its live Beats 1 broadcast, as well as free ad-supported access to algorithm-based radio stations. Spotify has grown to 75 million active listeners, just a bit smaller than Pandora's active listener base. And Google hasmade its radio stations in Google Play Music free, and YouTube has developed its own autoplay features around music videos.

For when you just want music
With all of this competition, it's becoming harder to differentiate products. Apple, Spotify, Google, and Pandora all offer free ad-supported radio stations. You can avoid ads listening to Apple's Beats 1, but your fate is then in the hands of the DJ, and you still have to listen to their commentary.

If all you want is music, you're going to have to pony up some money. That's something most listeners have been unwilling to do. Less than 5% of Pandora's listeners subscribe to Pandora One. Spotify has done better, converting 20 million of its 75 million listeners into paid subscribers. There's no data on Apple or Google.

And the main reason is likely that the average music listener is a casual listener. The average consumer spent less than $50 on music last year, so paying $10 per month for a streaming service doesn't make sense to most people. Pandora offers its service for $5 per month, but it's still limited to radio listening with no on-demand options.

But for a weekend pool party or barbecue, spending $0.99 for a day of ad-free listening is extremely convenient, and it's something the average music listener would consider. Additionally, the lack of a subscription (that users might have to cancel) reduces hesitation in the purchase.

For the casual music listener, there's no less expensive option than the Pandora One Day Pass.

Outsized benefits to Pandora
While paid subscribers make up just 5% of Pandora's total listeners, they accounted for over 20% of the company's revenue through the first six months of 2015. As well they should. Subscribers are likely heavy listeners that would otherwise account for a high percentage of ad revenue.

But if Pandora could make as much money from those subscribers just by forcing them to listen to ads, offering a subscription business wouldn't really be worthwhile. Indeed, Pandora found that the revenue generated per listener hour from a subscription was 85% higher compared to free listeners during the first half of the year.

That means Pandora stands to benefit greatly from the potential to convert casual listeners to One Day Pass purchasers. Not only does the $0.99 offer differentiate the product, encouraging more users to choose Pandora, it generates more revenue per listener when they take the offer.

Additionally, Pandora may be able to use the One Day Pass to get more people to try out Pandora's premium service. That could convert a higher percentage of its user base to paid subscribers, which is something the company needs to start focusing on. Its user base is limited by its geographic reach (USA, Australia, and New Zealand), and growth has slowed to just 4% in the most recent quarter.

Overall, the new feature has a lot of potential, but it still remains to be seen how consumers respond to the a la carte offer from Pandora.