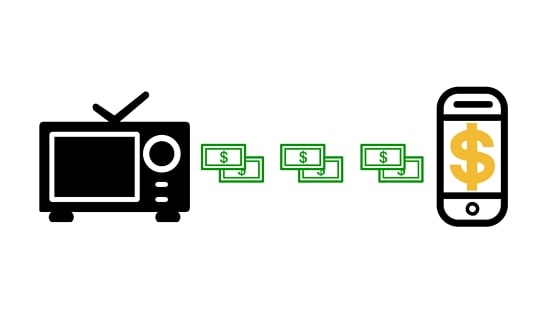 Ad dollars seem to be shifting from television to mobile. Image source: author.

A recent report from Kantar Media found that U.S. ad spending on traditional media was down 3.9% during the second quarter this year. That's roughly a $1.5 billion decline.

Overall, 15 of the 22 media categories tracked by Kantar saw a decline in ad spend, including desktop display advertising. However, the company doesn't track two areas of significant growth in the advertising world: online video advertising and mobile advertising. Companies such as Facebook (FB 1.41%), Google (GOOG -0.08%) (GOOGL -0.16%), and Twitter (TWTR 3.91%) dominate mobile advertising, and their rapidly growing mobile revenue is a sure sign ad dollars are shifting, not shrinking.

eMarketer now expects U.S. advertisers to spend $11 billion more on mobile in 2015 than they did last year. That growth alone is more than enough to offset the $1.5 billion quarterly decline in other media categories.

Just as on desktop, Google leads digital advertisers in ad spend on mobile. The company is primarily bolstered by mobile search advertising. Google recently told investors that the number of search queries on mobile recently surpassed search queries on desktops in the U.S. and several other large markets. That's further indicative of the shift in Internet usage from desktop to mobile, and explains the 7% decline in desktop display advertising through the first half of the year. It's worth noting that paid search advertising on desktop continues to increase, according to Kantar, up 7.6% through the first half of the year.

Twitter, meanwhile, is quietly taking a sizable share of the growing mobile display ad market. Its purchase of MoPub gave it access to the ad inventories of thousands of apps. MoPub's revenue is reported in Twitter's data licensing line item, which grew 44% last quarter. Meanwhile, Twitter's native display advertising business continues to chug along, growing 63% during the second quarter to $452 million. What's more, Twitter's revenue is still heavily concentrated in the U.S., with domestic revenue accounting for 64% of the total.

And video's growing, too
Kantar's panel also doesn't monitor digital video ad spending, an area of huge interest for Google, Facebook, and Twitter. While the shift to mobile is even more pronounced in video advertising than display and search advertising, desktop video advertising continues to grow.

eMarketer expects desktop video ad spending to increase by nearly $1 billion this year, an increase of more than 20%. Google's YouTube is particularly dominant on desktop, but other competitors, like the ad-supported Hulu, are growing their audience as well.

Twitter and Facebook are also working to enter video advertising. Twitter allows advertisers to use its Amplify program to advertise videos on Twitter as well as through MoPub. Facebook, meanwhile, enables businesses to promote videos just like they'd promote any other post. Both companies are working to make videos more familiar to users, and Facebook boasts its users now watch an average of 4 billion videos per day. Look for both to take advantage of the shift in ad dollars from television to digital.

The winners and the losers
Although it looks like video and mobile have grown enough over the last year to offset declines in other media, growth in U.S. advertising dollars remains sluggish any way you look at it. As a result, winning ad dollars is becoming more of a zero-sum game, and the winners appear to be the mobile-first digital advertisers like Facebook, Twitter, and Google.

The clear losers are television networks, which have taken to squeezing in more commercials to offset declines in ad prices. Additionally, print media continues to see a sharp decline in ad spend as more users get their news from Facebook and Twitter on their mobile devices.

There's no reason not to expect these trends to continue, which makes for a compelling growth story for Facebook, Google, and Twitter.