Android-based smartwatches are on the rise, but there are a few reasons Apple shouldn't be worried. 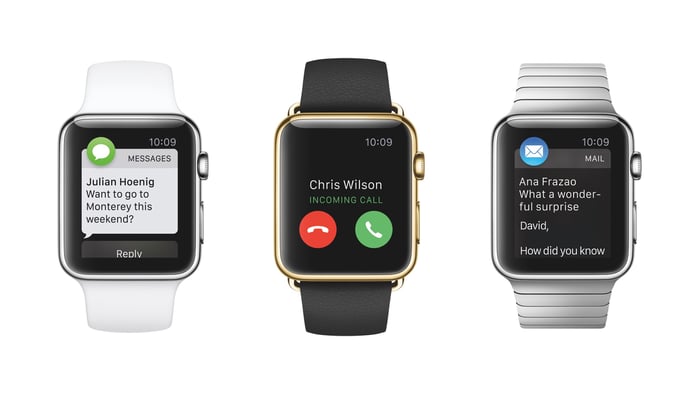 Recently, IDC released data showing that Apple's (AAPL 0.17%) smartwatch will decrease in market share between now and 2019. This year, Apple will command about 58.3% of the smart-wristwear market, with about 13.9 million shipments, according to IDC. But by 2019, that percentage will drop to about 47.4% as the rise of Android-based wearables begins to take off.

"Android/Android Wear will experience market-beating growth, with a combination of consumer-electronics heavyweights and an expanding list of watchmaker brands also expected to launch their own smartwatches in the years to come," IDC said. "Also helping Android/Android Wear's cause is the broader and deeper selection of devices at multiple price points that will appeal to a wide audience."

Over the next few years, you'll probably hear a lot about Android devices that are gaining market share and how the Apple Watch is losing its dominance.

Here's why that won't matter:

Market share isn't the best indicator for how well a product is doing compared with its competition. Sure, it's important, but it's not the only gauge in measuring the success of a device.

This leads us to the important measurement of average selling prices, or ASPs. The iPhone has an ASP of about $624, while Android devices are about $185. And that large disparity will probably be true for the Apple Watch. Apple will be able to keep its prices where it wants, while other device makers will have to competitively price their smartwatches against the growing number of Android smartwatch makers, to help their devices stand apart.

Right now, ABI Research estimates that Apple's smartwatch has an ASP of $445, while the average selling price for Android watches was about $189 in 2014, according to Smartwatch Group. And as Android and Android Wear shipments grow over the next four years, the device makers will have a hard time closing the gap between their ASPs and the Apple Watch's.

And let's not forget that in addition to higher selling prices, the Apple Watch also commands high margins. Apple has said the Watch margins will be slightly below the company's typical average of about 39%. While some analysts have taken that to mean the Watch will have low margins, Apple CEO Tim Cook suggested on the Q2 2015 earnings call that they should check their math.

"And I haven't even seen this, but generally, there's cost breakdowns that came out around our products that are much different than the reality," Cook said. "I have never seen one that is anywhere close to being accurate. And so, if that's the basis for your comment, I'd really dig into the data if I were you."

Looking ahead
Of course, we're just at the start of Apple's foray into the smartwatch market, and plenty could change over the next few years. But Apple's already put its Watch in a similar position as its other devices. It's priced high above the competition, it's already become a market leader, and even if market share slips, the company is still positioned to profit immensely.

So when you start reading that Apple is losing its grip on smartwatch market share, don't panic. Check the Watch's sales numbers, ASP, and gross margins -- and then breathe a sigh of relief.