With Nokia's stock price struggling, one analyst recently made a strong case that its shares are likely to rise in the wake of its coming merger.

In the roughly half-year since it was announced, the climate surrounding the merger of Nokia (NOK -0.10%) and Alcatel-Lucent (NYSE: ALU) remains somewhat precarious. Alcatel-Lucent's stock has gained only moderate ground, while Nokia's shares have sunken precipitously. 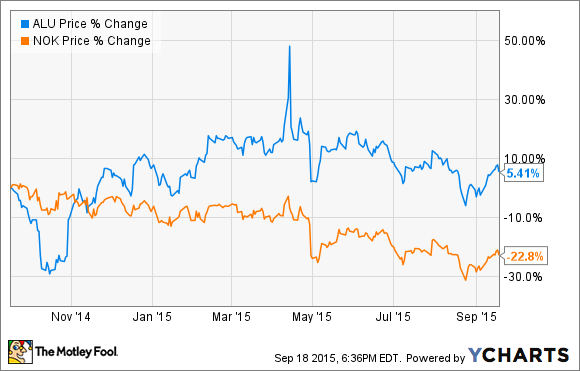 However, although the road to their eventual combination could well prove bumpy in the months to come and is fraught with several genuine risks, it appears the deal will probably close early next year. And ahead of the deal's consummation, at least one analyst believes Nokia's stock looks like a screaming buy.

Duval notes that Nokia had underperformed a selected set of comparable European equities by 18% at the time of publication. (Note that it's since fallen further.) However, as is the case with all value investing, Nokia's moderately depressed stock, trading at just 13 times earnings, creates an attractive entry point for a business whose fundamentals will probably materially improve after its purchase of Alcatel-Lucent eventually closes.

Duval also believes the combined Nokia and Alcatel-Lucent should see its market share in global wireless equipment network rise from 18% pre-merger to as high as 25% afterward. This newfound scale should help Nokia more effectively navigate the brutally competitive wireless equipment market against larger incumbents Ericsson and Huawei. It should also help improve its Nokia Networks division's margins beyond its projected 8%-11% levels next year. Between them, these two factors should combine to create a powerful positive effect on Nokia's financial results, which Duval sees as central to reversing its currently middling stock-market performance.

Great move, terrible industry
Finally, Duval makes a compelling case for near-term opportunities. For two companies with some complementary operating segments, there are some cost efficiencies that the combined Nokia and Alcatel-Lucent can wring from its new operating model to help boost margins and profits. And as Duval noted, those improvements could drive a reversal in sentiment for Nokia's sagging stock price. However, that comment to me speaks to the important difference between a trade and investing.

Without performing the kind of in-depth, granular research required before establishing any investment or trade, I agree it appears an opportunity to profit with Nokia stock could exist. However, for those looking to invest over the longer term, as we prefer to do here at the Fool, the harsh industry dynamics of the telecom equipment space give me pause about the future Nokia/Alcatel-Lucent's chances of achieving consistent long-term profits. The roughly decade-old rise of Chinese telecom equipment vendors, and the global price war their emergence triggered, has pressured profit margins across the entire industry to the point where only the strong survive. Alcatel-Lucent has consistently struggled to achieve profitability since its component companies merged in 2006.

The real problem from a long-term investor's perspective is that the merger helps insulate the combined companies from the industry's economic realities, but it won't reverse them. So pressure on margins will probably remain to some extent, and that gives me pause.

While the merger is reportedly likely to pass, it ain't over till it's over. According to the mechanics of the merger agreement, rather than simply voting to ratify the decision, a majority (50% +1) of Alcatel-Lucent shareholders must agree to tender their shares for new Nokia shares for the transaction to complete. And at a shareholder meeting earlier this year, 24% voted against the pay package of Alcatel's chairman, Phillippe Camus, as a rebuke over what many shareholders see as Alcatel's accepting a lowball bid from Nokia. Again, this is a limited set of shareholders, but it also indicates sizable dissension in the ranks of Alcatel-Lucent investors.

Nokia and Alcatel-Lucent said they expect the deal to close at some time in the first half of 2016, so there's still time for agendas to shift and new subplots to emerge. So while investors can see a road map to a winning trade in Nokia's shares over the coming months, such a move isn't without its fair share of short- and long-term risks.