From its negative international same-store sales to brewing competition, investors should proceed with caution.

Krispy Kreme (NYSE: KKD) has enviable brand power and international recognition, but with the stock down more than 18% since January and consistently falling short of analyst expectations over the past two years, including in the most recent quarter, you might want to proceed with caution. Here's why.

High multiples are no guarantee of future success
At 21.5 times forward price to earnings and at a trailing P/E of 34, according to Morningstar,  KKD is trading well above the S&P 500 average of 19, Krispy Kreme's high valuation implies growth expectations, but the company's growth strategies leave investors with plenty of questions. In the annual report, Krispy Kreme lists those strategies as accelerating global growth, leveraging technology, enhancing the core menu, and maximizing brand awareness.

International same-store sales for locations open at least 18 months have been consistently negative for quite some time. During the first quarter of fiscal 2016; same-store sales fell by 9.2% including currency impacts, or 1.7% on a constant-dollar basis. The trend continued in the most recent quarter, with comps down 2.7% in constant dollars, or 12.6% with currency impacts.

The difference is indisputable between year-over-year same-store sales for international and domestic operations: 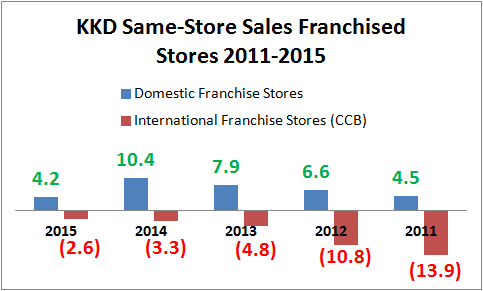 Although there is improvement, whether it will be sustainable and consistent remains to be seen. Investors should keep a close eye on subsequent quarters and fiscal years to see whether same store sales at international locations can climb out of negative territory and stay there.

Competition is another growing concern.  Two of it's closest competitors are Dunkin Brands and Starbucks.

Dunkin is diversifying away from its traditional coffee and doughnuts and transforming operations into one with a strong focus on sustainability and healthier alternatives. The DDSmart menu, for instance, offers healthier options as Dunkin keeps up with changing times. The company also plans to start operations in Mexico, where KKD already has a strong presence with over 130 locations. A recent partnership will allow Dunkin to open more than 100 restaurants in Mexico over the coming years.

Starbucks has its own developments in the works. It recently announced it will be partnering with local bakeries in order to offer regional treats at various locations. Starbucks is also incorporating Starbucks Evenings meant to increase foot-traffic during off-peak hours; not to mention that the company is already international with plans for growth in nearly every country where Krispy Kreme operates.

Krispy Kreme is not only competing against other doughnut and coffee shops. It's also going up against a growing trend of consumers who want healthier alternatives. We all enjoy a glazed doughnut once in a while, but I'm not sure those occasional indulgences will be enough to sustain Krispy Kreme for the long term. Although the company has other offerings, sales of doughnuts comprise 89% of total retail sales, with the remainder coming from beverages.

The Foolish bottom line
While I respect the strong brand power Krispy Kreme has been able to build, I'm not convinced it can justify its pricey valuation. Perhaps the company should curb its international expansion plans and focus on domestic operations, where it's profitable. In any event, there are comparable investments out there that can give us more peace of mind and less of a sugar rush.