Please ensure Javascript is enabled for purposes of website accessibility
Log In Help Join The Motley Fool
Free Article Join Over 1 Million Premium Members And Get More In-Depth Stock Guidance and Research
By Brian Feroldi - Sep 23, 2015 at 11:36AM

Reports that the company is looking for a buyout caused its stock to spike.

What: Shares of BioMed Realty Trust (NYSE: BMR), a real estate investment trust, or REIT, that specializes in providing properties to the life science industry, were soaring 13% higher today as news broke that the company is looking to sell itself.

So what: Bloomberg is reporting that that the San Diego-based BioMed is currently working with Morgan Stanley to find a company to that would be interested in acquiring the REIT. According to people familiar with the discussions, the company has already attracted the attention of a number of firms, including private equity giant Blackstone Group LP.

Now what: Whenever news like this breaks, it's no surprise to see investors get excited and rush in to bid up the stock -- but the company itself has yet to issue a press release on the matter, so investors should remember that there is no guarantee that a deal will ever be announced, let alone completed.

Investors in BioMed should be looking to today's stock pop with glee, as the company's stock has been a loser to the market since going public more than a decade ago, even after factoring in reinvestment of the company's juicy dividend, which now stands at over 5%. 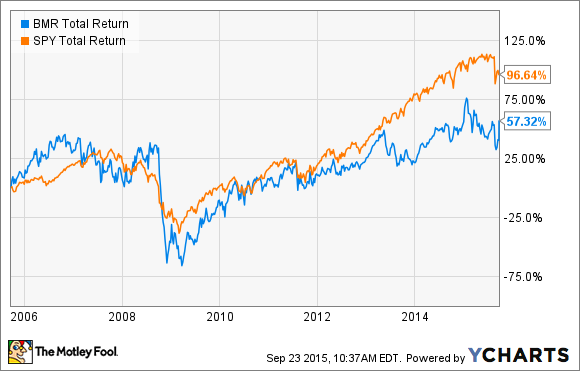 While a short term pop is always fun, if a deal is never formerly announced then it is likely that the stock will fall in response. Thus, anyone investing in BioMed's stock today should be investing on the merits of the company itself, and not merely on the chance of a higher stock price from a buyout.

While BioMed's business model is certainly interesting, the stock's performance has been uninspiring since going public more than a decade ago -- so I for one will be watching this story play out from the sidelines.