Market volatility is always around the corner, so here are three stocks to protect yourself.

Invest in the stock market long enough, and you're sure to come across a time of turbulence. Whether it's a 10% correction, like we've seen recently, or a 50% plunge in stocks, like we saw in 2008/2009, there are bound to be ups and downs for investors.

If you're looking to build a portfolio that can stand up to the market's turbulence and survive the test of time, we've found three stocks you may want to consider buying.

Travis Hoium (Procter & Gamble): What could be more bulletproof than a company that makes consumer staples we use everyday, and has been paying a dividend uninterrupted for 125 straight years? That's exactly what Procter & Gamble (PG -1.64%) has done, and it actually has a string of 59 straight years increasing its dividend payout to shareholders.

Procter & Gamble's product line spans from toilet paper to diapers to dish soap. It's not a sexy business, but it's the kind of business that generates billions in cash flow year after year, which is returned to shareholders in the form of dividends and share buybacks. 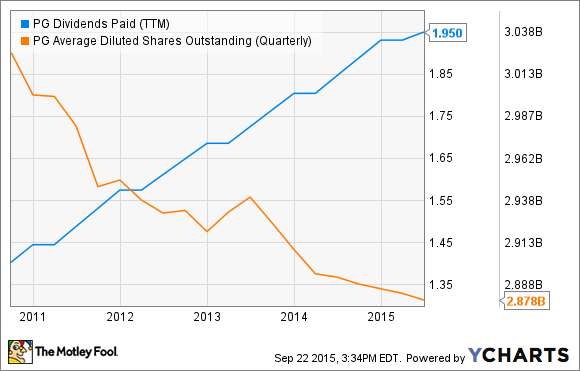 Another nice thing about Procter & Gamble's products is that they aren't in constant need of innovation. Unlike tech companies, which have to reinvent themselves constantly, products like toilet paper and laundry detergent don't change often, and aren't constantly under assault from start-ups.

Given Procter & Gamble's product lines, and its history of consistent results for shareholders, I think this is a bulletproof stock that belongs in every value investor's portfolio.

Alex Dumortier (Mead Johnson Nutrition): I've always thought pediatric nutrition specialist Mead Johnson Nutrition (MJN) was a first-class business, but with the shares having fallen nearly 30% below their 52-week low, I now think it's a good value, too. When I've mentioned it previously, I focused on the sustainable competitive advantage its well-respected brands confer on the company. That advantage offers Mead Johnson protection against competitive threats, and ensures the franchise's stability, but it has good growth prospects, as well, particularly in emerging markets.

China is already Mead Johnson's largest market, but the long-term opportunity there remains excellent, even if there are some bumps along the way. As Citigroup analyst David Driscoll wrote at the beginning of September:

Mead was behind the ball in reacting to a rapidly changing Chinese formula market from a channel and product standpoint. If Mead can reach 15% share in the baby store and Internet channels (up from 6%-8% and in-line with modern trade share), this would represent potential incremental revenue of $550 million (+13%) and +74 cents to EPS (+20%).

Temporary setbacks are to be expected as Mead Johnson gains a better understanding of the rapidly evolving tastes of the Chinese consumer. Far from being concerned about it, investors ought to be delighted that last quarter's fumble in China is one the reasons they can pick up the shares at a discount to intrinsic value.

In response, Mead Johnson isn't standing around with its hand in its pockets. Combine its actions with a changing market, and Citigroup's market-share target doesn't seem unrealistic. As CEO Kasper Jakobsen told analysts and investors on the second-quarter conference call:

We launched a fully imported line of Enfa branded products in China toward the end of April as evidence of the velocity of the shift in consumer preference. By the end of the just completed [June] quarter, this line represented approximately 20% of our total sales in Mainland China.

I suggest feeding your portfolio some shares of Mead Johnson Nutrition; I think you'll find they'll contribute nicely to its healthy growth, and development well beyond infancy. In fact, I'd go as far as to say the shares have the potential to be a "lifetime holding."

Dan Caplinger (Altria): The tobacco industry has historically done well, even during challenging times, and Altria Group (MO 1.85%) has weathered plenty of stock-market storms in the past without suffering any permanent damage. The tobacco giant offers a lucrative dividend yield of more than 4% to its shareholders, and consistent increases have made Altria one of the most-successful dividend stocks of the past half-century.

In addition to its Marlboro brand, Altria has a wider array of products under its corporate umbrella than many realize. Snuff brands Skoal and Copenhagen are Altria products, and the MarkTen line of electronic cigarettes has gained acceptance rapidly. The company also owns the Ste. Michelle winery, and most recently, Altria has gotten attention because of its roughly 27% stake in beer-maker SABMiller, which has become the subject of takeover interest. Currently, it's uncertain whether a deal would involve accepting shares of the acquiring beer company or result in a huge cash payday for Altria to redeploy in other directions, but either way, Altria stands in a strong position with respect to SABMiller.

With so much exposure to products for which demand remains relatively stable regardless of economic conditions, Altria has demonstrated its resiliency in the past, and current investors believe that the tobacco giant will likely hold up better than the broader market even if current choppiness continues into the future.

Stocks for a bulletproof portfolio
Consumer staples, pediatric nutrition, and cigarettes are certainly products that aren't going to be abandoned by consumers, no matter how rough the economy or markets get. That's what makes them perfect for a portfolio that's preparing for volatility. The only question is: Which one is your favorite?

Why Carvana Stock Is Bouncing Back Today