If oil prices rise by 2020, offshore drilling stocks should be big winners.

Not all oil drilling is created equal. There are different cost structures for different wells, different timelines, and even differing quality of the product being extracted.

This dynamic means there are also very different strategies in different parts of the drilling industry. The rise of shale drilling could be followed by an equally dramatic fall as oil prices drop, for example. Companies can cut expenditures by the week or month onshore depending on the moves in oil prices. But offshore drilling, particularly ultra-deepwater offshore drilling, takes years of planning and is less susceptible to short-term oil movements.

Backlog is a big deal
Given the turmoil in the energy industry, companies with revenue certainty should be on investors' radars. Seadrill (SDRL) has a backlog of $7.5 billion for its own fleet and $14.0 billion in backlog for Seadrill Group, which includes Seadrill Partners (SDLP) and SeaMex.

That backlog gives investors assurance that Seadrill will be able to manage the next year or two. You can see that 75% of the floater fleet is under contract for the rest of 2015; for 2016, 74% of the fleet has a contract, and all the way out to 2017, over half of the fleet has work. 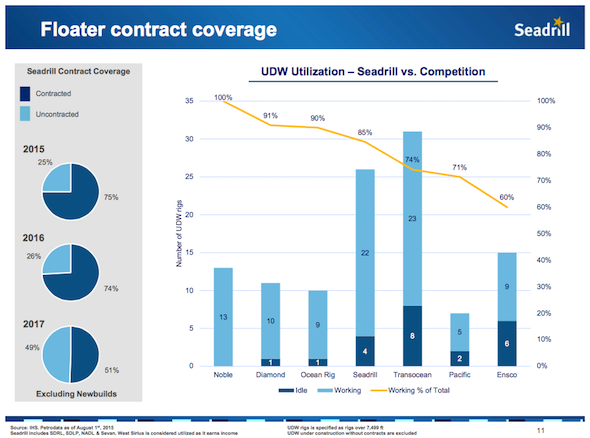 The jack-up segment isn't quite as strong, but contracts tend to be shorter for these shallow-water rigs. Still, 57% of the fleet's capacity has contract coverage next year, so it isn't as if business will be falling off a cliff. 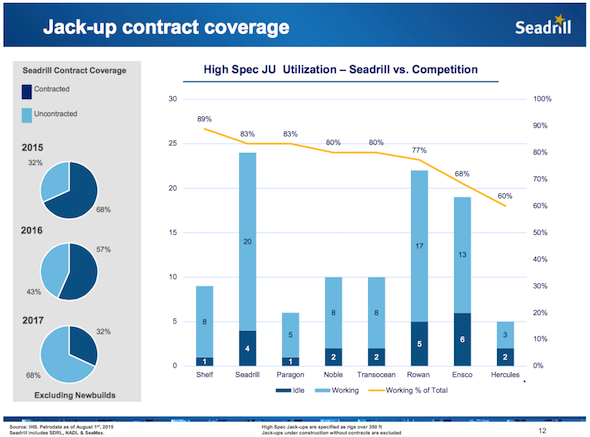 While onshore drilling in the U.S. saw rig activity drop like a rock early in 2015, the same can't be said for offshore drilling, especially in deepwater. The projects Seadrill is drilling take months, or even years, to complete, and contracts are signed over these durations by oil explorers. They'll take the lumps of low oil prices in the short term because they have a decade-long view of the value of these wells.

Offshore oil is a key for the oil industry
Based on the media's coverage of the shale boom in recent years, it may seem like that's the only segment of the energy industry that's important right now. But offshore drilling is a key to the industry's future, and U.S. companies, Brazil's Petrobras, OPEC, and even African countries are betting billions on its future.

These bets on offshore drilling aren't a passing fad, like much of the shale boom looks to be today. They're based on the industry's realization that offshore oil is going to fill the reserve needs to fund future revenue. And if OPEC is right, and oil approaches $80 per barrel by 2020, the demand for offshore rigs will pick up again.

That should benefit Seadrill, which has the backlog to limp through the next couple of years and wait for a stronger offshore drilling market. The long-term nature of offshore drilling works in the company's favor, and that's why I'm staying bullish on this floundering energy stock.