There was a time when only Wall Street analysts could produce sales forecasts for new products, with the help of privileged access to the company's own estimates. But the days when they had a monopoly on data are long over.

First, these are the comments Apple itself has made in a statement on its outlook for iPhone 6S sales in the run-up to the launch:

Customer response to iPhone 6S and iPhone 6S Plus has been extremely positive, and preorders this weekend were very strong around the world. We are on pace to beat last year's 10 million unit first-weekend record when the new iPhones go on sale Sept. 25.

How did Foursquare come up with that number?

First, using data collected from the Foursquare app, it compared the number of visits to Apple stores during the weeks leading up to the launch day and for the week following the launch. Not surprisingly, when it looked at the data for the last three launches (2012, 2013, and 2014), it found a massive spike in visits on the Friday of the launch.

Foursquare then looked at data from Apple to compare launch weekend sales to average weekly sales during the quarter. When it combined its own data with Apple's, it found that there was a very close relationship between the increase in visits on launch Friday versus average visits on a regular Friday, and the increase in unit sales during launch weekend relative to an ordinary week: 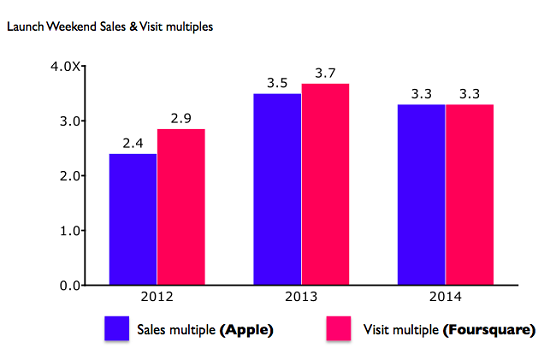 It's not all that surprising that foot traffic should be closely related to sales. The tricky part is getting decent foot traffic data, which plays to Foursquare's strength since users "check in" with regard to the locations they are visiting. Foursquare believes it has access to "the world's best "panel" of global foot traffic and is a strong enough sample size to be a strong indicator of sales overall."

On that basis, it concludes:

Based on these early indicators, Foursquare predicts that launch day foot traffic will be about 360% of a typical Friday. This likely means that Apple will sell 13-15 million iPhones this weekend, surpassing all previous records.

Before you start to pop the champagne corks, it's worth noting that not all crowdsourced data confirms Foursquare's optimism outlook. The following graph shows the search interest on Google for the term "iPhone 6S" over time (blue line), as well as the interest for the terms "iPhone 6" (red) and "iPhone 5S" (yellow):

You can see that the most recent point (this month) on the graph for "iPhone 6S" is much lower than last year's spike for "iPhone 6," but it's at roughly the same level as "iPhone 5S" on its launch in September 2013. (Caveat: Google only has partial data for this month.)

With all of that said, in the frenzy of attention surrounding Apple's launch weekend, it's easy to overstate the importance of the sales numbers. As Toni Sacconaghi of Bernstein wrote in a recent research note to clients:

Perhaps Wall Street analysts are still useful after all.