Please ensure Javascript is enabled for purposes of website accessibility
Log In Help Join The Motley Fool
Free Article Join Over 1 Million Premium Members And Get More In-Depth Stock Guidance and Research
By Andrew Tonner - Sep 25, 2015 at 11:00AM

The tech and e-commerce leaders take aim at the global video game market -- how bad could this news be for long-time industry short candidate GameStop?

With the tech industry's typical early fall product launch season well under way, investors and the media have had their hands full dissecting the past few weeks' developments. With all the commotion, it's easy for investors to get stuck in the trap of analyzing how important refreshed products like the Apple(AAPL 2.32%) iPhone 6s, Microsoft Surface Pro 4, and Amazon(AMZN 4.03%) Fire tablets will help drive the results of their respective firms in coming quarters.

However, assessing the likely winners and losers in the shifting world of big tech also requires investors to step back from this quarter-by-quarter analysis and look objectively at how these new devices influence the big picture narrative.

Case in point, one of the more interesting storylines emerging in recent weeks has been the increasing competition among the likes of Apple and Amazon with the refresh of their smart TV products, which some feel could hasten the decline of game distribution giant GameStop (GME 11.54%). Let's take a look.

Apple and Amazon dive into gaming
Within a week of each other, Apple and Amazon introduced updated versions of their respective set-top TV devices with each one prominently featuring new gaming capabilities as a central selling point. The moves speak to a number of interesting growth strategy story lines for both Apple and Amazon. And more significantly, they also signify the ongoing creation of a new digital distribution ecosystem that's likely to take root in the gaming industry over the long-term.

Observers should note that Amazon and Apple's gaming networks lack the marquee billion-dollar titles like Activision Blizzard's Call of Duty or Take-Two Interactive's Grand Theft Auto that help drive a substantial amount of GameStop's in-store traffic, and that's likely by design to some extent.

Apple's new tvOS is reportedly 95% derived from Apple's iOS mobile-operating system, which allows for easy access to Apple's already existing cadre of smartphone and tablet games. It isn't immediately clear if Amazon's Fire TV leverages a similar adaptation of the forked version of Google's Android mobile OS that powers its Fire tablets and now-discontinued smartphones in the same way as Apple's tvOS, but the end effect appears the same regardless. As should be expected, bringing the App Store into the living room will initially feature simple but popular iPhone games. However, if I had to bet on a grand strategic aim from Amazon and Apple, pushing deeper into the entire video game market only strengthens their respective platforms while also offering greater convenience factors for consumers as Internet speeds continue to increase across the U.S.

Is GameStop going the way of the Dodo?
Unfortunately for GameStop, the video game and console distribution business model is likely on the losing end of history. As we've seen with past brick-and-mortar content distribution businesses like Blockbuster, Circuit City, Borders, and Tower Records, the Internet's ability to bring content directly into homes around the world largely invalidates the need for broad-based retail distribution. For a few reasons, GameStop is unlikely to meet a similar fate in the short-term, but the eventual outcome seems almost inevitable barring a massive and unforeseen pivot on GameStop's part.

Although it has made several attempts to diversify its revenue base in a few key respects in recent years, GameStop remains unavoidably leveraged to its namesake industry. 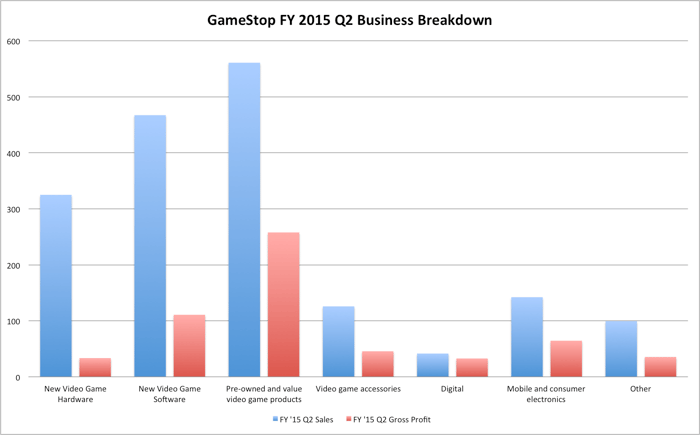 The four left-most columns represent the bulk of GameStop's core video game retail business and, all told, they comprised 83.9% and 77.1% of GameStop's revenue and gross profit, respectively. And unfortunately for GameStop over the long-term, much of this hardware and software distribution could easily shift to online.

Here, the secondhand game market, GameStop's biggest source of sales and gross profit, proves an especially critical lifeline in keeping its operations afloat. One of the most pervasive arguments in favor of GameStop's ongoing existence, and there's certainly a case to be made, is that the company helps keep game pricing competitive in the short-term by creating a liquid market for game disk resale. This is much to GameStop's benefit given the huge margins game resales yield.

However, as names like Amazon and Apple create digital storefronts for games in addition to Microsoft and Sony, one can see how a competitive marketplace similar to the vigorous price competition in the e-book space could take shape. It's also probably true that by creating a marketplace (app store) to connect developers with consumers, the traditional game publisher model, and the costs that come with it, could drop. We've certainly seen how the rise of the app economy has democratized software development, which itself creates price competition among game makers. Longer term, the benefits of digital distribution simply seem too great.

So, while Apple and Amazon slowly positioning themselves to compete more in the gaming market isn't the death knell for GameStop quite yet, it is a sign of what will likely be darker days just over the horizon.