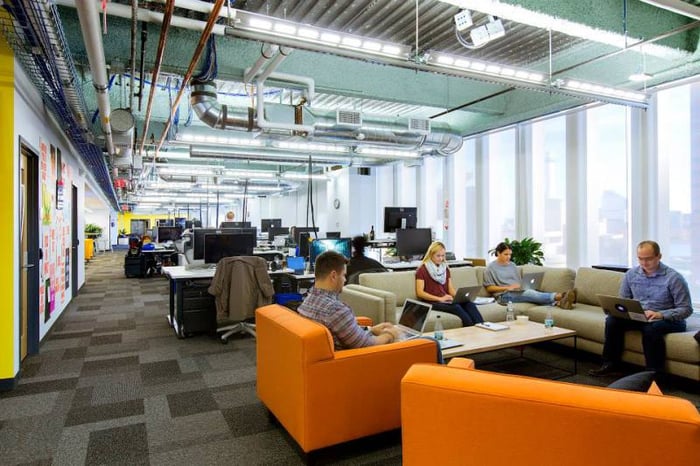 Logging into Facebook (NASDAQ:FB) at work is typically reserved for lunch breaks, but it could soon become a 9 to 5 requirement. Facebook is reportedly planning to launch its Facebook at Work platform to the public by the end of the year, according to Re/Code. The product has been in beta testing with more than 100 companies since January.

Facebook at Work is aimed at the market of office communication tools such as Slack and Microsoft's Yammer. Facebook will offer the service for free with the option to pay for additional features, eschewing its typical advertising model. With strong competition already in the market, what makes Facebook think it can succeed?

The differentiating factor
Facebook stands to benefit from a certain amount of familiarity with potential users. Early looks at the product indicate that it functions extremely similarly to Facebook's regular social network, and you'll be able to log in with your Facebook credentials -- which are probably already stored on your work computer anyway.

The system is more robust than Slack, which offers a messaging and file sharing system for groups. It includes the ability to organize groups around projects, teams, and inter-office social activities like the first-place softball team. Additionally, admins can make announcements, and it offers users specific places to ask for help and discuss issues. All of this is, of course, organized in the all-familiar News Feed.

Microsoft, meanwhile, offers its own differentiating factor in that Yammer is tightly linked to Office 365. The social network is included in the price of Microsoft's enterprise editions of the increasingly popular cloud productivity suite. Since acquiring Yammer in 2012, the company has integrated Yammer more closely with Office 365 and continues to do so every quarter.

Facebook plans to penetrate the market with a free version of Facebook at Work, requiring enterprises to pay for additional features. That should help overcome some of the advantages of Yammer's integration with Office 365, but it's a tactic taken by other competing services as well. Slack, for example, is free, but it requires businesses to pay in order to archive messaging history.

Why is Facebook working on this project anyway?
The market for inter-office communication tools isn't huge by any means. Slack, the largest independent player in the market, was valued at about $2.8 billion in its latest round of funding. To put that in perspective, Facebook generated over $4 billion in revenue last quarter. Still, there are a couple of worthwhile reasons for Facebook to enter the market.

First, Facebook was solving its own problem. Facebook at Work is a tool that the company developed for internal use. After years of using it at its offices in Menlo Park and around the world, Facebook had a product that it could take public. Facebook would potentially be leaving money on the table if it didn't try to sell this product.

Facebook CEO Mark Zuckerberg has likened the company's position with Messenger to where it was with Facebook in the early days of Pages. The first step is to attract more businesses to the platform before the company can really focus on monetizing it. Facebook at Work could gently nudge businesses to establish a larger presence on Messenger and help monetize the platform down the road.

Facebook at Work is certainly an interesting product, and one many businesses will at least test out. But like all new Facebook products, investors shouldn't expect it to have any immediate impact on earnings as the real value comes from long-term relationships with businesses.