Beyond Tesla's Model X launch, here's one more important item for investors to watch next week.

Next week could be a volatile week for Tesla Motors (TSLA 4.88%) stock. On Tuesday, the company will finally show off its fully electric SUV, dubbed Model X. But could Tesla's announcement of third-quarter vehicle sales, which should take place before the week's end, ultimately be the announcement that decides where the stock ends up trading?

What to expect
During Q2, Tesla delivered 11,532 vehicles. This was up 52% from the year-ago quarter and 15% sequentially. How many cars could Tesla deliver in Q3?

Tesla predicted in its Q2 shareholder letter that production constraints due to a one-week factory shut down during the quarter would suppress the quarter's growth in deliveries. Subsequently, it expects deliveries in Q3 to be about the same as they were in Q2.

Tesla explained its third-quarter one-week factory shut down, which had already occurred by the time the company reported second-quarter results, in its second-quarter letter to shareholders:

We just concluded a planned one-week Fremont factory shutdown and made changes in stamping, Model S body center, drive unit production, battery module and pack production and general assembly to allow for an elevated level of production and efficiency.

Tesla expects its Q3 deliveries to lag production by about 500 vehicles. The disparity between production and deliveries makes sense. As Tesla's overseas markets continue to grow, the required number of vehicles in transit to these locations continues to increase.

Is Tesla's guidance conservative?
But investors should note that Tesla has met or exceeded its guidance for vehicle deliveries in every quarter except one for the last 10 quarters. It's likely, therefore, that Tesla's actual deliveries in Q3 will exceed guidance. The question, of course, is: By how much? 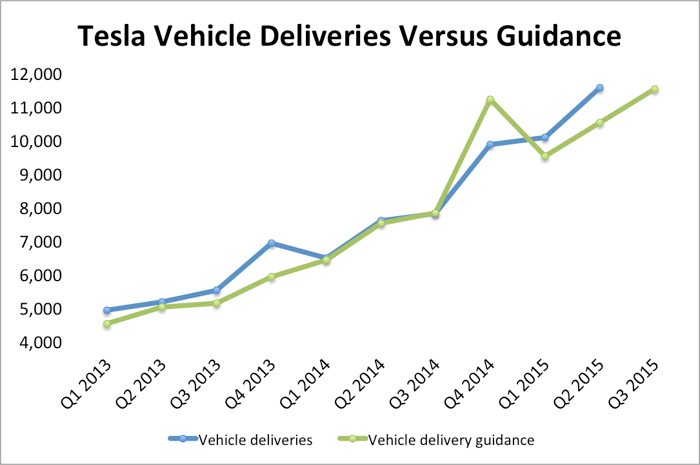 For quarters in which Tesla provided a guidance range instead of a specific number, the guidance midpoint is used in the chart. Data retrieved from respective quarterly letters to shareholders for quarters shown. Chart source: author.

Consider how Tesla's second-quarter deliveries compared to the guidance Tesla provided for the quarter: Its 11,532 deliveries were about 1,000 higher than the midpoint of its expected range of 10,000 to 11,000 vehicles. Could Tesla outdo its guidance for quarterly deliveries by about 1,000 vehicles again during Q3?

Earlier this year, Tesla committed to publishing new car deliveries within three days of quarter end. So, investors can expect an update from the company before Oct. 4.