This company is churning profits from helping others work smarter -- not harder.

Awarded an ESPC by NASA in 2009, Ameresco has reduced energy consumption by 35% at the Wallops Slight Facility shown above. Source: Ameresco.

What do Hawaii and Aspen -- lands of fire and ice -- have in common? It's the same thing that Burlington, Vermont, and Greensburg, Kansas, share: a deep commitment to renewable energy. Aspen recently became the third U.S. city to source its power solely from renewables, and Hawaii hopes to run completely on renewable power by 2045. To a lesser degree, California is also pursuing renewables; the state legislature recently passed a bill in which it targets 2030 as the year by which the state sources 50% of its power from clean energy sources.

Besides adding solar and wind power to the grid, energy efficiency is a key component in the fight to forego fossil fuels. And, fortunately for Ameresco (NYSE: AMRC), a leader in energy efficiency solutions for both power producers and consumers, California's legislators also voted to double the energy efficiency of buildings by 2030. But it's not just California that represents a market opportunity for the company. According to Navigant Research, the U.S. and European markets will continue to grow for several years to come. 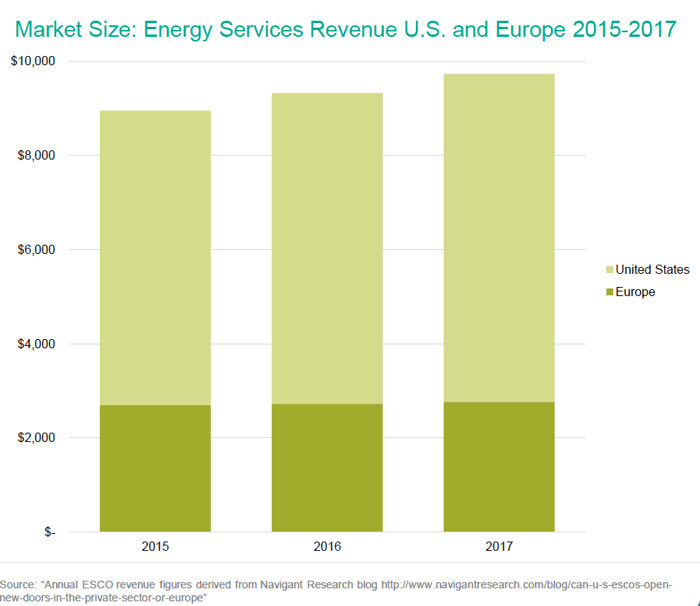 Efficiency and power know-how
In presenting the ability to do more with less, Ameresco attempts to remove financing as a barrier to recognizing energy improvements. Through an Energy Savings Performance Contract, or ESPC, Ameresco offers to cover all costs associated with identifying and implementing the energy solutions. The customer pays Ameresco with a portion of the energy savings. At the end of the contract's term, the customer retains the improvements and continues to receive savings.

The company is also qualified to help customers develop renewable energy solutions -- everything from solar power to geothermal to biomass to wind power. Emphasizing service offerings, Ameresco has worked over the past five years to diversify its revenue streams. For example, the company has more than $700 million in operations and maintenance backlog related to U.S. Federal projects that extend out up to 18 years.

Getting that backlog rolling
The market hasn't been kind to Ameresco for some time now -- shares are down more than 50% over the past five years. Though the company had steadily grown revenue and earnings from 2005 through 2011, the following three years were a challenge.

It seems as though the company has turned the corner, though. Despite its awarded projects declining 14% from 2013 to 2014, the backlog grew 6.6% over the same time period -- the first instance of sequential, annual backlog growth since the company went public in 2010. More recently, for the second quarter of 2015, Ameresco's 12-month, fully contracted backlog has grown 19% year over year.

A guide to the guidance
Over the summer, Ameresco provided guidance on FY 2015. If it is accurate, the company will have proven that it is successfully working its way down the road to recovery.

Should revenue for 2015 fall in the middle of the estimated range, it would mark a 5.5% improvement over 2014. And, if adjusted EBITDA falls in the middle of the guidance, it will represent a much more impressive 19.5% gain over 2014, suggesting that the company is not just bringing efficiency to its customers' endeavors, but that it is bringing greater efficiency to its own operations.

The takeaway
With volatile oil prices dominating the headlines in the energy sector, it is understandable that investors are missing other newsworthy items -- namely, the concerted efforts of cities and states to distance themselves from coal and fossil fuels. Obtaining a greater share of energy from renewable sources is one way to accomplish this, but achieving greater energy efficiency in existant facilities is yet another. Offering customers not only energy efficiency services, but a variety of renewable energy solutions, Ameresco is well-poised to prosper from the waning interest in traditional energy sources. Should the company meet its guidance, it would appear that it will have turned a corner, bearing worthy consideration for investment.