When the market gets choppy, it can be a good time take a hard look at your portfolio.

We Fools tend to be buyers of stocks and like to hold them for the long term, but that doesn't mean we never sell. There are plenty of reasons to sell a stock, such as changing industry conditions, a weakening financial position, or simply that you think you can put the money to better use elsewhere.

We asked our team of Motley Fool contributors to share a stock they'd be willing to sell today, rather than continuing to take a chance on the company's future success. Take a look at what they said and see if you agree.

Brian Feroldi: Although its stock has enjoyed a tremendous run over the past year, at the top of my list for stocks to sell would be pharma giant Eli Lilly (LLY -1.70%).

First, a look at the company's stock price, which has been on a steady upward trajectory: 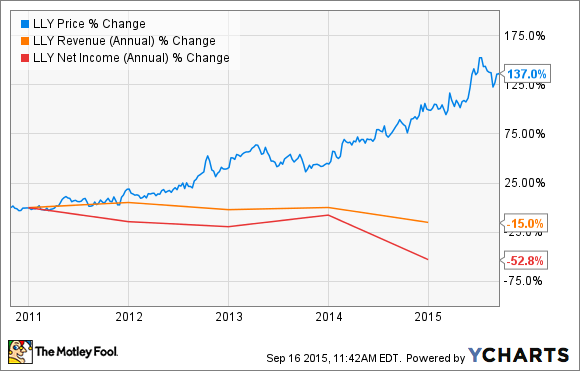 However, both revenue and net income have been falling for years, thanks largely to losing patent protection on key drugs such as Zyprexa, Cymbalta, and Evista. In the next few years, other blockbuster names will join that list, including Cialis and Alitma. And now that biosimilars have finally made their way through the FDA, Lilly's top-selling insulins may soon find themselves competing against lower-cost alternatives.

Lilly isn't standing still. The company has made some serious efforts to cut costs and strengthen its pipeline with promising drugs that are aimed at treating a huge variety of diseases, including Alzheimer's disease, cancer, and arthritis. It's also been active at partnering with overseas companies, with hopes that their partnerships will bear fruit one day.

So it's not that Lilly can't succeed in the future, but with the stock trading at 43 times trailing earnings and a still pricey 23 times 2016 earnings, I think the market is pricing in too much hope and not discounting enough of the risk. Until we see some of its pipeline turn into revenue, I'm going to steer clear of the stock, especially when you consider there are better investments available on the markets today.

Todd Campbell: A lot of hype surrounds using marijuana as a therapy for all sorts of diseases, and following lackluster study results in treating cancer pain and mixed results for treating schizophrenia, marijuana play GW Pharmaceuticals (GWPH) may have a valuation that's just gotten too rich.

GW Pharmaceuticals is undeniably at the forefront of researching marijuana's therapeutic potential, but I'm not convinced the company will be able to validate its effectiveness in large enough patient populations to warrant a billion dollar-plus market cap.

In January, a trial evaluating GW Pharmaceuticals' THC drug Sativex in cancer pain failed to outperform a sugar pill, casting doubt on its use in that large market. More recently, GW Pharmaceuticals reported results from a schizophrenia trial that, while interesting, were a bit lacking.

Following data from those trials, pressure mounts on the company to deliver positive results for its marijuana therapy for childhood epilepsy. Data should be coming in on that indication, but given the risk of another lackluster outcome and the fact that the indications being studied are for small patient pools, it may be worth ringing the register on this one if you're sitting on a profit.

George Budwell: GlaxoSmithKline plc (GSK -0.11%) is a Big Pharma stock that comes with brand recognition and a massive dividend yield of nearly 6%. Even so, I would caution investors against owning this dividend stock right now.

The company is facing a potentially steep drop-off in revenue because its aging asthma blockbuster, Advair, is likely to soon face generic competition in the U.S., and its newer respiratory medicines such as Anoro and Breo Ellipta don't appear capable of picking up the torch.

In fact, Breo Ellipta just failed to meet its primary endpoint in a late-stage study designed to assess the drug's ability to reduce the risk of cardiovascular death in COPD patients. This study would have greatly helped Breo Ellipta to differentiate itself from competitors and potentially capture a far larger market share.

Glaxo has been plagued by similar setbacks seemingly across its entire clinical pipeline of late, putting it in a precarious situation when it comes to replenishing its revenue stream going forward.

In turn, the drugmaker's hefty dividend yield is looking increasingly unsustainable. If the company doesn't lower its dividend or quickly find another major source of revenue, for instance, Glaxo's payout could become unsustainable (in fact, its cash payout ratio, which is the percentage of free cash flow paid out in dividends, was over 100% over the trailing-12 months -- not a good sign, as you usually want to see sub-80%).

All told, Glaxo simply doesn't offer much in the way of growth, and its dividend appears slated for a major reduction in the near term.

Could Eli Lilly Stock Help You Become a Millionaire?
401%