Please ensure Javascript is enabled for purposes of website accessibility
Log In Help Join The Motley Fool
Free Article Join Over 1 Million Premium Members And Get More In-Depth Stock Guidance and Research
By Rich Duprey - Sep 26, 2015 at 9:07AM

Just because one automaker has the top-selling vehicle year after year doesn't mean consumers see it as the best brand.

The F-150 pickup may be the best-selling vehicle just about everywhere, but it hasn't helped transform Ford into the Brand of the Year. Image source: Ford.

Everyone has a personal favorite when it comes to a brand of car or truck, but it's undeniable that when we're looking at the most popular vehicles on the road today, Ford (F 3.89%) typically ranks at the top. Whether it's the F-series pickup -- the F-150 has been the best-selling vehicle globally for many years running now -- or the fuel-efficient Focus and Fusion lines, Ford cars and trucks typically outsell rivals' vehicles.

Yet that kind of year-in, year-out performance doesn't always translate into consumer mindshare when it comes to overall best brand.

According to Nielsen's Harris Poll EquiTrend rankings for 2015, which measure the connections brands make with consumers across elements like familiarity, quality, and purchase consideration, Ford actually came in fourth, just behind General Motors' Chevrolet, but well ahead of Fiat Chrysler, which didn't make the cut at all. This means that the top-ranked brand just might surprise you.

Brand equity equals greater financial equity
Each year, Harris Poll analyzes the opinions of some 40,000 consumers on how they feel about some 1,500 brands in more than 170 different industries. It breaks down the responses to its survey to derive what it calls an Equity score that provides a "snapshot of a brand's strength." Those that score the highest in their respective niches are deemed the Brands of the Year.

The thinking behind the methodology is that a higher-ranking brand will perform better financially in relation to returns, stock volatility, and beta, or a stock's riskiness. So while Ford sells more pickup trucks than anyone else -- which does suggest consumers have a high opinion of the value and quality of the brand -- it's not necessarily enough to overcome the attributes that accrue to, say, the Chevy brand.

Past performance does predict the future?
Is there something to it? Looking at the stock performance of Ford and GM stock during the past two years, there might be a predictive quality, as Harris Poll assumes, particularly as Ford fell from third place in 2014. 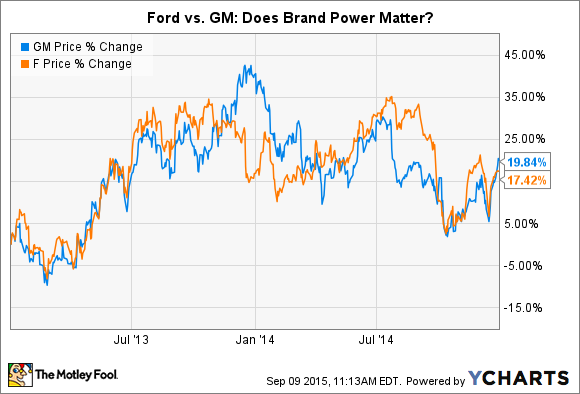 Of the many auto manufacturers that consumers have to choose from, only six brands performed reasonably well enough to rank above the industry norm. It's instructive to note those that fell below average, including GM's Buick brand, all three of Fiat Chrysler's brands, Hyundai, Kia, and Mazda, among others.

Which automakers ranked highly? Subaru came in sixth, Nissan was fifth, and as we noted earlier, Ford and Chevy came next in order, respectively.

Overcoming adversity
Honda Motors finished in the runner-up position. While this might seem to call into question the predictive quality of the survey's financial performance, as its stock has lost nearly a quarter of its value between 2013 and 2015, it also seems to prove the saying that the exception proves the rule. This year's full-line automotive brand of the year was Toyota (TM 0.79%), whose stock has outstripped the performance of all the other manufacturers, gaining more than 30% during the past two years.

This is surprising, not least because of the many recalls the automaker has been involved in, from the stuck gas pedal a few years ago, for which it paid a $1.2 billion fine for covering it up, to the faulty airbags made by industry supplier Takata that led it to recall 12 million cars globally. This is also one of the reasons Honda's stock is down so much -- it was affected by the recall much more severely than any other car manufacturer, as it apparently knew about the deadly defect for a decade.

A year-in, year-out reputation for quality and performance has helped the Toyota Camry to be one of the most popular cars on the market, and push the carmaker to the pinnacle of automotive brands. Image source: Toyota.

Despite Toyota taking hits to its reputation, in general, the public holds its vehicles in high regard, which explains why its Camry was the best-selling car in 2014. Through the first eight months of 2015, it's leading again.

Rev your engines
Motorheads can endlessly debate the finer points of which car is better, whether they rank it based on power, performance, or some other number appreciated by grease monkeys. But it may be that investors would be better served by looking at which auto manufacturer's brand consumers think is best. How they vote with their pocketbooks just may be an indicator of how the carmakers' stocks will perform.