Please ensure Javascript is enabled for purposes of website accessibility
Log In Help Join The Motley Fool
Free Article Join Over 1 Million Premium Members And Get More In-Depth Stock Guidance and Research
By Scott Levine - Sep 26, 2015 at 10:17AM

One of a true Fool's most deeply held values is the willingness to stand apart from Wall Street -- to forsake the conventional wisdom and to think critically for oneself. So, when four Wall Street firms initiate coverage on Sunrun (RUN 1.04%) and offer four bullish outlooks on a stock that has only been trading since the beginning of August, it's only logical to take notice and investigate for oneself how valid the firms' outlooks are.

Shining a light on risk
With approximately 87,000 customers, Sunrun is one of the leading installers of residential solar systems in the United States. According to GTM Research, Sunrun was the fourth leading installer of residential solar in 2014 -- though with only 2% of market share, it has a far way to climb if it wants to catch up with SolarCity (SCTY.DL), which grabbed 34% of market share.

Operating in 15 states, Sunrun prides itself on being the "largest dedicated residential solar company" in the country, and it is committed to expanding into new markets. Despite its presence, though, the company's customers are primarily located in California -- 58% as of March 31. The company expects much of its near-term growth to occur here as well.

In an industry so dependent on tax incentives and state policies, this puts the company at substantial risk should conditions in the state change in an adverse way.

Also of concern is the company's reliance on third-parties to supply its solar panels. The industry is experiencing rapid growth, and there are a limited number of solar-panel manufacturers. Federal tax credits expire at the end of 2016, and their renewal is uncertain, so developers are rushing to get projects under way while it's still financially advantageous. GTM Research reported that in the second quarter, the residential market grew 70% year over year and is expected to grow substantially. This increased demand may raise the prices of solar panels and compromise Sunrun's margins. Its main competitor, SolarCity, is less susceptible to this risk. Last year it announced its acquisition of solar-panel manufacturer Silevo. SolarCity is in the process of building a 1 GW production facility in Buffalo, N.Y., to meet its demand for solar panels as the company continues marching toward its goal of 1 million customers by 2018.

Focusing on financials
Because Sunrun has only been public since August, it's difficult to ascertain how well the company is performing. Regardless, the company just released its second-quarter earnings, which demand examination. After all, if Wall Street is so optimistic about the company's prospects, we should look to see if we agree.

Sunrun offers its customers four ways in which they can "go solar." 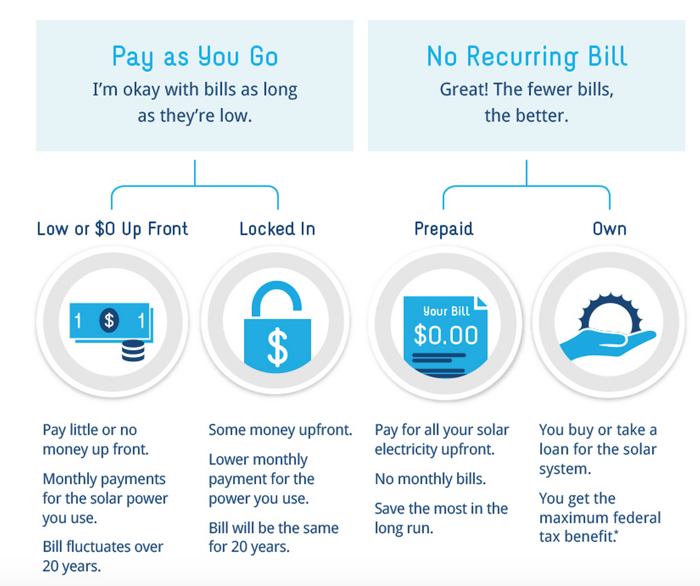 Many customers opt for monthly payments instead of putting money down upfront, so the company's earnings have to be considered over 20 years. Because of this business model, it's unfair to use traditional metrics in looking at the company's earnings. As the company acquires customers, it's securing 20-year revenue streams. To estimate the long-term value of this ongoing revenue, the company uses a measure called retained value -- the present value of cash flows remaining from customers' agreements. Bear in mind, though, that this metric makes certain assumptions. It includes a discounted estimate of the value of the purchase or renewal of the agreement, and it excludes various costs like: operating, maintenance, and administrative expenses. So, take the value with a grain of salt.

For the second quarter, the company reported gross retained value of $1.2 billion, equating to 12.5% growth quarter over quarter and 55.4% growth year over year. Compared with its most prominent peer, its sequential growth is less impressive. SolarCity's retained value of $3.8 billion in the second quarter represents 24.2% growth over the $3.1 billion it reported in the first quarter. It bears remembering that Sunrun operates in only 15 states, so there's ample opportunity for the company to expand into new markets and grow its retained value, but at the moment, I'd prefer a wait-and-see approach before assuming any success.

One valuable metric in assessing the company's ability to control expenses is cost per watt -- the installation, sales, and general costs of deploying its systems. For the second quarter, the company reported a cost per watt of $4.08 -- an improvement of 6% quarter over quarter. SolarCity operates in more than just the residential market like Sunrun, and it doesn't break out it's earnings figures for just the residential market, so comparisons between the two companies aren't exact like apples-to-apples; it's more similar like Granny Smith to Macinotsh. For the second quarter, SolarCity reported that its cost per watt was $2.91 --  a 1.4% decline quarter over quarter and 3% year over year. It does, however, specify that the reduction in costs was due to the residential segment.

The company's ability to control for costs resulted in more value per watt. For the second quarter, the company's net present value per watt (the project value less the creation costs) improved 39% quarter over quarter to $0.92. The scope of this improvement over the long term is impossible to assess, since there are no previously reported earnings with which to compare it.

A Fool's final thoughts
There's no doubt that Sunrun's opportunity is robust. Residential solar is growing at a rapid clip, and Sunrun is well poised to take advantage of the trend. Does that warrant an investment? Not necessarily. Despite Wall Street's optimism, it's difficult to share the sentiment. Operating in the public market is very different from being privately held, and many times the shareholders' intense scrutiny is overwhelming for companies that have recently IPO'd. Although the Street's bullish outlook is understandable, I'd much rather keep this one on the watchlist, avoiding a nasty burn that no aloe could treat.