National Oilwell Varco's (NYSE:NOV) stockholders have been rather wary as of late. Declining revenue and a lack of new orders to fill the company's backlog have some questioning how much longer it will be until we see a turnaround in the oil market. As a result, the company's stock is now trading a levels close to what they were during the depths of the recession. 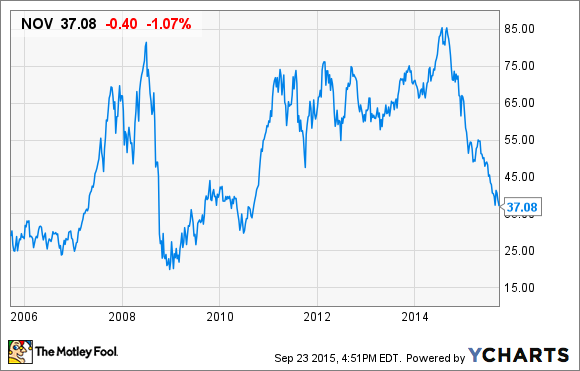 While we can't mark our calendars with a date where the market will turn for the oil industry and National Oilwell Varco, there are a few reasons to think that things could get better in the coming years. Here are three industry trends that could be huge catalysts for National Oilwell Varco's stock if the company plays its cards right.

The imminent rig resupply
Just like how a well's production declines over time and a new well needs to be brought online to offset that decline, the equipment on a rig ranging from the drill bits to the top drives wear out and need to be replaced. Aftermarket parts like these have long been one of National Oilwell Varco's most profitable and most resilient part of the business. Since 2011, margins in the comapny's rig aftermarket segment have only declined by 30 basis points and have remained above 25% while every other segment has lost at least 100 basis points.

The reaso its rig aftermarket is due for a decent boom in the coming months is that many rig owners and operators have foregone typical scheduled replacements to milk every extra dollar out of a piece of equipment before having to spend on maintenance. According to National Oilwell Varco CEO Clay Williams, the company's distributors have been witnessing a lot of "rig cannibalization" out in the field, in which owners and operators strip parts off non-working rigs to replace the equipment on working ones. This is one of those short-term fixes that can delay buying new equipment for a while, but eventually these companies will need to start buying equipment again.

When they do, chances are it will be National Oilwell Varco-manufactured products, as the company holds a near monopoly on the manufacture of drilling equipment. This resupply couldn't come at a better time for the company, either. A decline in new rig orders has put a crimp in its bread-and-butter rig-systems segment. A boost in income from the rig aftermarket segment could help cover some of the declines in its other segments and show that National Oilwell Varco's current business structure can hold up well in the down cycle of the market. A reversal of sentiment based on strong rig aftermarket demand definitely has the potential to boost the company's stock price.

Taking the NOV model to the FPSO market
Despite the recent decline in offshore rig demand, there has been a lot of exploration and development work in deepwater regions with very little existing energy infrastructure in recent years. More than 300 offshore discoveries have been made that have yet to be actually developed. When oil and gas producers look to turn these finds into producing assets, one infrastructure component companies will look at is floating production, storage, and offloading facilities, or FSPOs, because of their lower capital commitments and their ability to move to new location once a field is exhausted.

One issue that has come up with developing FPSOs, though, is that most of the time their development goes over time and over budget. A recent survey of nine FPSOs showed that the average vessel was delivered at least a year late and 38% over budget. For producers, the cost of a FPSO is important because its cost will have a large factor on per-barrel costs for that oil source for years. One of the identified reasons for constant budgetary overages on FPSOs is a lack of standardization and supply-chain issues.

This is why the company has the potential to be such a huge player in the space: Standardization and streamlining the supply chain are two of NOV's specialties. One of the reasons that the company was able to gain an 80% market share in offshore rig drilling equipment is it built standardized rig systems that took a lot of the excess deign work out of the process and made parts replacement that much easier. For NOV, it turned the entire industry into a recurring customer that demanded NOV replacement parts.

Recently, the company stated to apply these methods to the FPSO market in the best way it knows how: Buy up smaller parts suppliers, consolidate them all under the NOV label, ensure that they are all compatible with its other offerings, and sell complete packages to shipyards and owners. In fact, the company has already developed a proprietary design for FPSOs that is already significantly lower than the traditional methods. 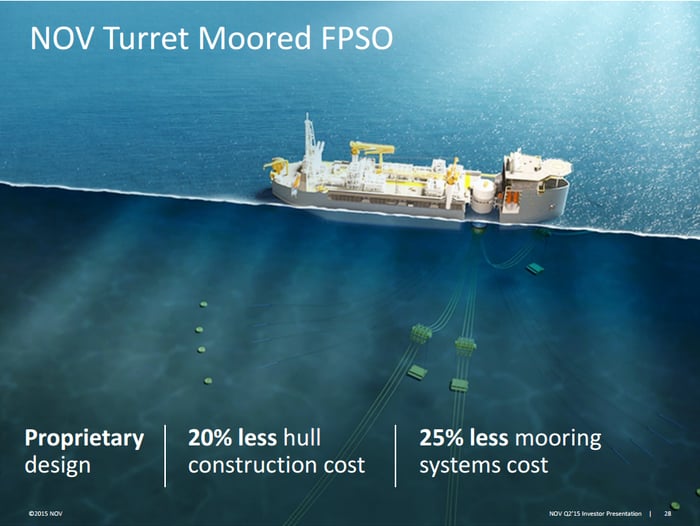 As companies look to keep FPSO projects on budget, chances are they will look to National Oilwell Varco for its equipment needs. The combination of new FPSO systems sales -- and building a customer base to sell aftermarket parts -- has big potential in the coming years to boost National Oilwell Varco's stock price.

Shale drilling rigs for international markets
For the most part, shale drilling has been a uniquely North American phenomenon. There are several reasons for that, such as a technology lead, adequate shale drilling resources such as water, a more favorable regulatory framework, and, to a lesser degree, a higher tolerance of risk. That being said, we can't expect shale drilling to exist only in North America forever. There are simply too many oil and gas in shale formations around the world for them to be ignored. 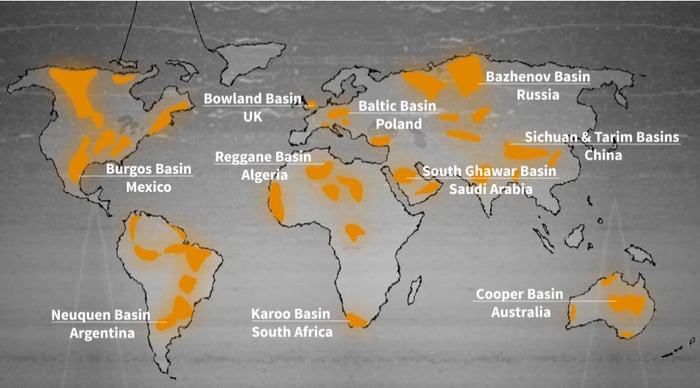 To access shale effectively and economically, a special type of drilling rig is needed -- one that has the capability of turning from a vertical to a horizontal well, the horsepower to drill a several-thousand-foot lateral section for stimulation, and the ability to move from well to well on a single pad without needing to be disassembled and reassembled.

Because of drilling demand in the U.S., the rigs capable of doing this -- labeled "AC drive rigs" in the following chart -- have taken the market by storm and now make up a significant portion of the total drilling fleet.

Overseas, though, these rigs are almost nonexistent. To access these vast swaths of shale resources overseas, it will take large amount of these new AC drive rigs, a product that National Oilwell Varco has the capability to manufacture, as well as a big customer base in the international markets. Today, more than 75% of NOV's revenue comes from outside North America. That suggests that when international customers line up to order these new shale-capable rigs, they will turn to National Oilwell Varco first.

It may take a while for the shale drilling revolution to really take hold internationally, but when it does, chances are it will lead to lots of orders for National Oilwell Varco.

What a Fool believes
No one can say with any certainty when these trends will take hold, but the oil and gas industry will need to resupply working rigs, build out a fleet of FPSOs for offshore discoveries under development, and get the equipment to tap interntaional shale formations to the right customers. As those things happen, National Oilwell Varco will be one of the major suppliers of the equipment to make it happen, and the earnings that come with supplying those needs will be huge catalysts for NOV's stock over the long term.