A look at how Targa Resources Partners LP stacks up to the hypothetical perfect MLP.

There is no perfect company or perfect investment. However, it's still important to strive for perfection. That's why I've put together a list of characteristics that the perfect master limited partnership would have and I'm using that list to measure the industry's top MLPs. Here's how Targa Resources Partners LP (NYSE: NGLS) stacks up.

This is an area where Targa Resources Partners could use some improvement as it has recently fallen below the low end of that spectrum as we can see on the slide below. 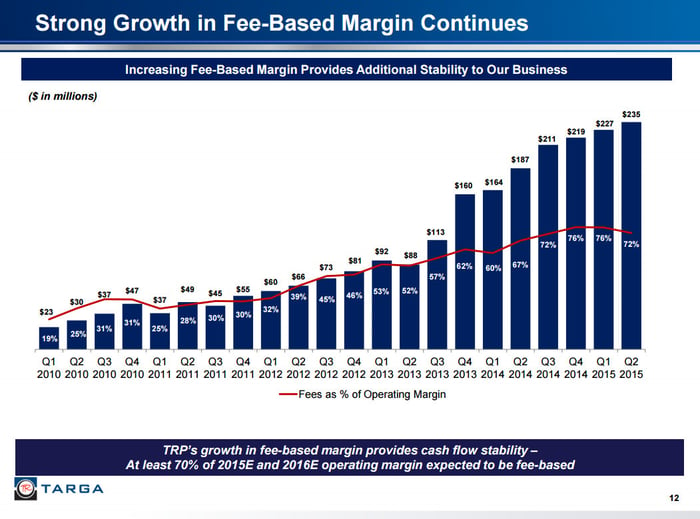 While the company had been making solid progress adding more fee-based assets to its portfolio, the percentage slipped earlier this year. However, that's solely due to the acquisition of Atlas Pipeline Partners, which had a smaller percentage of its margin supported by fee-based assets. While Targa is building additional fee-based assets, it doesn't expect its percentage to be much higher than 70% through the end of next year. While not a red flag, it is something investors should keep an eye on.

2. A solid balance sheet
The perfect MLP would have an investment grade credit rating and/or a debt-to-EBITDA ratio of 4.0 times or less. This is another area where Targa Resources Partners is right on the borderline. Currently, it has a BB+/Ba1 credit rating from the major ratings agencies, which is just one notch below investment grade. However, its debt-to-EBITDA ratio as of last quarter was 3.8 times, which slightly better than my cutoff. So, again, not perfect, but not a huge concern either.

4. A history of distribution growth
Distribution growth is critical for an MLP because it not only produces a growing supply of recurring income for investors, but it grows the overall value of the MLP leading to a high total return. This is one area where Targa Resources Partners has done a good job as its distribution has grown consistently over the past few years as the chart below notes. 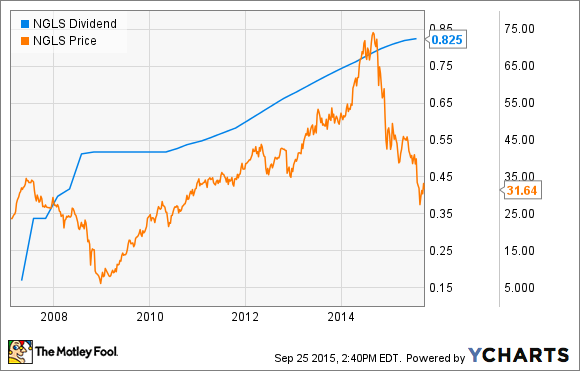 Overall, the distribution has grown by a compound annual rate of 12% since Targa Resources Partners IPO. Though, that payout growth is moderating with the payout only expected to grow by about 4%-5% this year.

5. A visible growth project backlog
Given the importance of a growing distribution, we'd like to see visible evidence that growth can continue. That's where having a strong project backlog is key as these projects should support future distribution growth.

Targa Resources currently expects to spend $700 million to $800 million on growth capex this year. Further, it expects to spend another $350 million to $500 million next year. These investments will be spent primarily on fee-based projects that should come online over the next two years. In addition to that the company has over $4 billion in projects under development for future growth. So, it certainly does have pretty visible growth on the horizon.

Investor takeaway
Targa Resources Partners clearly isn't perfect, though it is pretty close. Having said that, the concern is the fact that only 70% of its cash flow is secured by fee-based assets and yet it is paying out nearly 100% of its cash flow to investors via distributions. The risk lies in its non-fee-based cash flow, which if that cash flow were to drop it could force the company to reduce its distribution given that it has little wiggle room.