Some giants of industry and a younger startup are unlikely to see 2025.

Look back even just a few years, and a number of brands that once seemed like they would last forever stumbled and went out of business.

You local strip mall no longer includes Borders Books & Music or Linens & Things, while malls no longer have The Sharper Image locations, nor do they KB Toys, Merry Go Round, Fashion Bug, or Today's Man. Similarly, Circuit City closed its doors, as did Egghead Software, and it turned out that in fact, somebody did beat The Wiz.

Not being able to survive despite having a well-known brand is not unique to retailers, either. Financial giants E.F. Hutton and PaineWebber are no longer with us, and one-time successes including Enron, Eastern Airlines, and Standard Oil are gone. Even Delorean, the company that created the famous car for the Back to the Future films has ceased to exist.

No company has a guarantee of forever, but our panel of Fools believe these four are most likely to close their doors by 2025.

Anders Bylund (Groupon): I don't understand why Groupon (GRPN -2.58%) exists in the first place. It's a mystery and a miracle that the company has survived for seven years already, and I don't see how it could last for another decade. 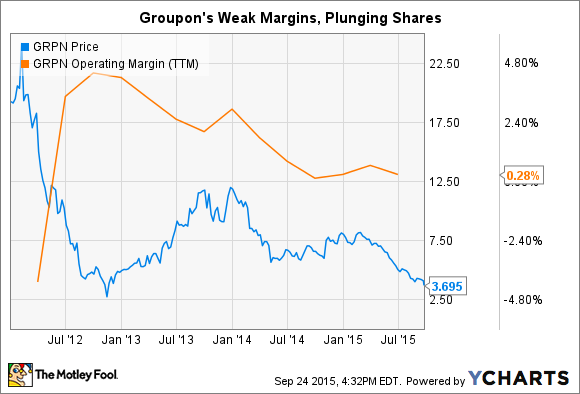 There's a turnaround effort going on at Groupon these days. The company is shedding overseas operations like it's going out of style. On top of that margin-preserving strategy, the company recently slashed about 10% of its workforce in the domestic business. Fellow Fool Rick Munarriz muses that the stock might be a great buy right now, having taken a 55% haircut in 2015 with a clearly defined path toward better times ahead.

Rick is a genius, of course, but I still don't buy his Groupon argument.

This is not some temporary threat, no soon-to-pass storm. It's a business idea that should never have been thought up in the first place. It's a solution in search of a false problem.

Yes, there's a place for coupon-clipping. But that will always be a niche service on the fringes of something more substantial, like newspaper publishing or online content portals. Dedicated coupon vendors don't have a financial leg to stand on.

If Groupon still exists in 2025, it'll be as part of a larger and more financially sound company. The current model was born irrelevant, like the dot-com puppies you can't recall anymore. If there's a buyout at the end of the tunnel, it'll be a dark little affair at a huge discount. More likely, the Groupon mirage will just blow up and disappear, like so many bad online business ideas before it.

Dan Caplinger (Supervalu): Grocery chain SUPERVALU (SVU) has already made a dramatic transformation, selling off many of its best-known grocery chains in order to focus on a narrower set of businesses going forward. Now, it's becoming increasingly clear that the company is unlikely to continue in its current form, and the big question remains whether it will break itself up or attract a buyer for the company as a whole.

Supervalu was aggressive in its past efforts, selling off Albertsons, Acme, Jewel-Osco, Shaw's, and Star Market stores to a private equity buyer in 2013. Yet now, the company has seen that its deep discount Save-A-Lot chain has different characteristics than the rest of its more traditional grocery units, with Save-A-Lot creating much faster growth.

With Supervalu having worked hard to cut its debt, it's now in a position to consider spinning off Save-A-Lot as a separate business, hoping to earn a higher multiple for its stock and freeing it up to pursue its own independent strategic plan. Meanwhile, with remodeling efforts ongoing throughout its traditional chains, which include Cub Foods, Hornbacher's, and Shop 'n Save, Supervalu is working toward unlocking value in its mainstream grocery segment as well.

Supervalu has survived the worst of times during the financial crisis, so unlike some companies in this article, Supervalu is less likely to fail outright. Yet by 2025, Supervalu will probably look a lot different than how it looks now.

Daniel B. Kline (Barnes & Noble): As a dedicated reader who has spent countless hours sitting in Barnes & Noble (BKS) stores sipping coffee while reading for free, it pains me to predict that the bookseller won't survive another 10 years. The problem is that reading physical books, while it has proven a more resilient concept than expected, is unlikely to sustain the entire company.

Yes, recent research showed that market share growth for e-books has stalled out, but that's a temporary phenomenon. It simply costs more to buy physical books than electronic ones. It's also silly to be tied to going to a bookstore or ordering books over the Internet when any e-reader, tablet, smartphone, or computer can call up nearly any book ever written in a few seconds.

People may not enjoy the digital reading experience as much as they like holding a book, but at some point, improving technology and prices will make them change their minds. I own thousands of physical books and read about three each week. I too fought the idea of using an e-reader until I used one (an early model Kindle) and realized it was lighter than most books and much easier to flip pages. It also offered me nearly every new book for under $10 as well as countless others for under $5 if not free of charge.

Small, local bookstores may survive by catering to the audience that still insists on buying a physical product. However, there won't be a place for a chain whose locations to many of us have become places to drink coffee while browsing for books to buy online. The giant bookstore makes as much sense as the giant record stores of the not-so-distant past. They'll hold on longer and put up a better fight, but in the end, the result will be the same.

Brian Stoffel (Sears): I almost think it's unfair to mention Sears (SHLDQ) as the company I don't think will be around in 10 years -- the writing is already on the wall. While the stock has actually shot up over 30% since early August, I don't think that trend will continue for too much longer.

First, there's the overall trend away from shopping malls and brick-and-mortar retailers. E-commerce is simply killing previously entrenched players. So far in 2015, comparable-store sales have fallen over 7% for Kmart locations, and a whopping 14% at Sears' domestic stores. Those are horrible trends.

CEO Eddie Lampert may be able to prop up the stock for a short time, but I don't think the efforts will last. Selling off real-estate holdings provides a significant bump in earnings, but the only thing that will help ensure that Sears is around in a decade is growing traffic in the stores.

Given that Lampert's employees -- according to Glassdoor.com -- give him a measly 21% approval rating and that only 14% believe the company has a positive business outlook, I don't see this necessary increase in traffic at Sears stores happening any time soon.

Should Investors Bail Out of Supermarket Stocks?
409%