Please ensure Javascript is enabled for purposes of website accessibility
Log In Help Join The Motley Fool
Free Article Join Over 1 Million Premium Members And Get More In-Depth Stock Guidance and Research
By Matthew DiLallo - Sep 28, 2015 at 9:06AM

With a premier position in North America, Halliburton Company believes it will thrive when conditions improve.

The past year has been excruciatingly painful for the energy industry in North America. Since the peak, when oil last topped $100 a barrel, the number of oil and gas rigs actively drilling in North America has plunged 56%. This is having a noticeable impact on oil production in the U.S., as it's down a few hundred thousand barrels per day from its peak. 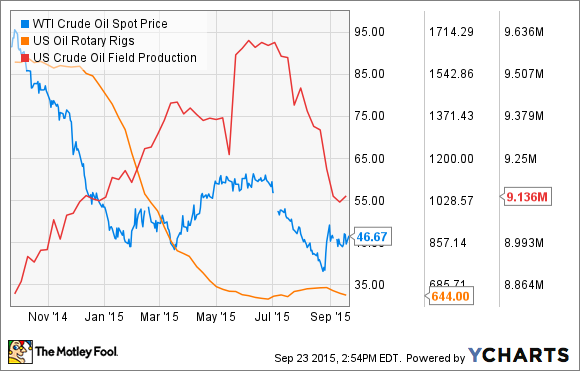 More production declines are probably on the way, as the current rig count isn't high enough to sustain production. However, as dire as that sounds, the implication is that at some point rigs will need to go back to work, because even though the oil market is currently oversupplied, it's a delicate imbalance as the natural decline rate of an oil well never sleeps, which means new wells must be drilled to meet future demand. And when those new wells are drilled, Halliburton Company (HAL 4.14%) will be there to provide the critical services and supplies to bring those wells online. It's a scenario that has the company quite excited about its future.

The money trail
At a recent industry conference Halliburton President Jeff Miller spent some time to discuss the various sources of oil and gas supplies. He noted that these supplies are measured by two main criteria: return and flexibility. He then pointed to the following side:

He noted that resources on the left were long-lead time projects (think years) while those on the right were much quicker to develop (think months). Meanwhile, those on the bottom where low-return projects, while those at the top offered higher returns. What he wanted to draw everyone's attention to was the upper left, which is North American unconventionals (i.e., shale), saying:  "[The] key point actually is that, and I think a very important one, is the fastest incremental barrel of oil to market, and that's that speed factor, which ultimately queues North America up to be a swing producer. It also means that when North America recovers, and it does, it has the most upside.

The reason this is really exciting for Halliburton is how much of the money spent on unconventional wells goes directly into its pockets.

North America: It's where the money is
Miller then pointed to the following side and said:

Investor takeaway
What this suggests is that when the recovery takes hold, it should start in North America because it's the fastest incremental barrel for oil companies. Further, that recovery will have an enormous impact on Halliburton's bottom line, as half the spending will be on the types of services it provides. That's a pretty compelling combination for the company and why it remains really excited about the future.