It's not inevitable that what goes up must come down but it's possible.

Apple (AAPL -1.39%) has ridden the success of the iPhone, iPad, iTunes, the Mac, and more to becoming the most valuable company in the world.

The company's own history, however, shows that being on top does not guarantee staying there. In 1997, when Steve Jobs was brought back as CEO, Apple was teetering on the edge of bankruptcy. Bad decisions that included licensing other companies to make versions of the Macintosh computer had nearly toppled the once high-flying company and only the visionary work of its founder returned it to glory.

It happened before and, as unlikely as it seems, it could happen again. Apple may be on top of the world, but the fall from those heights is longer, not impossible. Our panel of Fools looked at three realistic ways the company could be toppled from its lofty heights.

The iPhone is they key
If the iPhone fails, then so does Apple. The phone provides around 70% of revenue as you can see on the chart below. It may be hard to fathom since Apple appears to have such a diverse product line, but the iPhone drives its success. 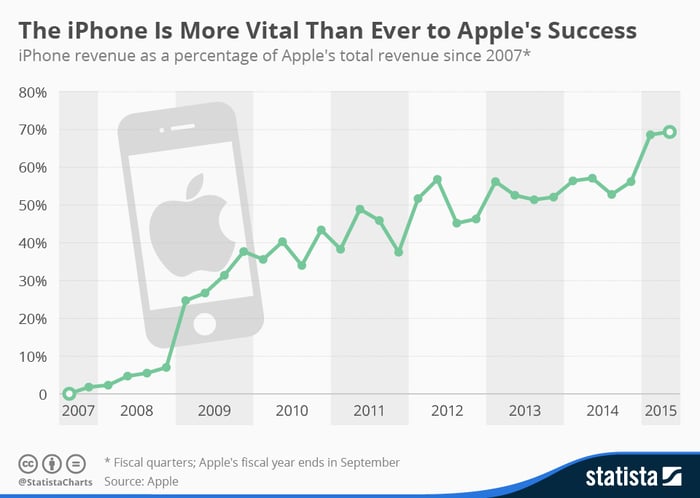 While Apple has created an excellent model where the yearly iPhone release is an event, it's not hard to see a time where it stumbles or even falls. It's already getting harder for the company to release distinctive new phones and it's likely to get harder in the future.

The latest iPhone looks to be a big hit, but customers may not jump to upgrade next time if the improvements are as minor as they are this time. Force Touch sounds cool, but in reality, it's not very useful (and it doesn't even come up that often). Everything else on the new handsets has been equaled or surpassed by a rival brand.

Still, Apple has customers well trained so it's that if the status quo is maintained that iPhone will continue to be successful. If, however, another company comes up with something better, then fickle fans could flee.

Past success does not guarantee continued success, and habits can be broken. Having 70% of your revenue tied up in one product is a recipe for disaster and however unlikely it is, Apple is not immune.

Chris Neiger (Stray too far from its core competencies): Right now, it's easy to believe Apple can do whatever it wants in nearly any product category and it'll be a huge success. But I think the company could start to see problems if it ventures into markets where it has little experience. Specifically, I'm referring to Apple's possible entry into the automotive market.

Rumors are flying (and judging by how many there are and from varying sources, they're likely true) that Apple will release its own electric car in 2019. With about $203 billion in cash, it clearly has the money to spend on such a project -- codenamed Titan -- but it could also end up being a huge distraction.

Despite Apple's vast experience with software, electronics, and manufacturing, the company's not used to building something with thousands of moving parts, complying with strict government safety regulations, or maintaining a product over such a long lifecycle. Sure, Apple might team up with BMW or another automaker to make its car a reality, but we'd still be left with Apple trying to extend its brand from consumer electronics to automobiles -- and that's quite a jump.

If anything were to hurt Apple in the coming years, I think it's leaps like this. A car has the potential to divert the company's attention away from its core iPhone business and toward the low-margin automotive sector. And that hardly seems worth the risk.

Travis Hoium (It's all relative): Falling from grace is relative for Apple. I don't foresee anything like its fall from the top of the PC heap in the 1980s, and with $203 billion in cash, the company would have to fail on a number of products to become irrelevant.

But Apple could fall victim to some of the same trends that have hurt PC companies in the past decade and a half, the most concerning of which is longer refresh cycles. It wasn't long ago that a PC was obsolete the second you plugged it in, but today a computer can live for four, five, six years and longer without becoming a useless brick. The same could be happening in the smartphone space and that could lead to a decline in annual revenues for Apple.

Think about the improvements between the iPhone 4S and the iPhone 6S, which will be released about four years apart. The low end of memory has doubled from 8 GB to 16 and the high end has doubled from 64 GB to 128, but those aren't big changes in the tech space. The camera has improved from eight mega pixels to 12 and added some stabilization and other technology, but again that's not a revolutionary change. The chips inside are faster, but how much do you really notice that?

I'm not suggesting that the iPhone 6S isn't a better smartphone than the 4S. I'm saying that upgrading isn't the no-brainer it was when the iPhone first came out. Remember that the original iPhone didn't even have 3G, so customers needed to upgrade regularly just to utilize the capabilities new smartphones provided. Now, it's possible to own an iPhone for three or four years without falling behind and that could hurt Apple's sales long term.