Please ensure Javascript is enabled for purposes of website accessibility
Log In Help Join The Motley Fool
Free Article Join Over 1 Million Premium Members And Get More In-Depth Stock Guidance and Research
By Adam Galas - Sep 29, 2015 at 10:05AM

Several analysts have recently downgraded this high-yield MLP. Find out how safe the distribution is and whether the analysts are right, or if this is the time to buy.

The combination of the oil crash and recent market correction has proved devastating for many energy stocks, including Enable Midstream Partners (ENBL) which recently received downgrades from several analysts, including Goldman Sachs, Zacks, and Credit Suisse. 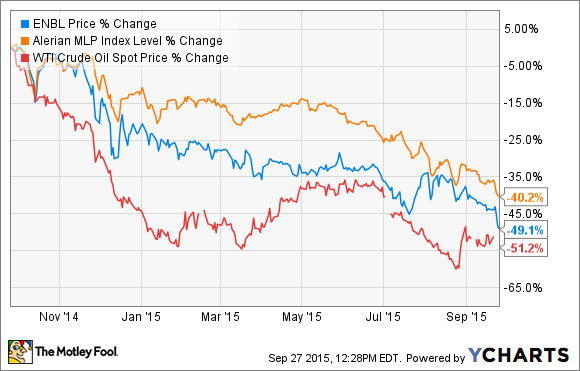 With its 10% forward yield, Wall Street doesn't seem to have much confidence in Enable Midstream's ability to sustain or grow its distribution. Let's take a look to see if analysts are right to be bearish about this midstream MLP or if this is actually a great long-term, high-yield income growth opportunity.

Enable's growth strategy hinges on continued heavy investment in U.S. shale oil and gas plays, such as the $63 billion that energy analyst firm Wood Mackenzie expects to occur in the various formations in Oklahoma's Anadarko basin between now and 2025.

As these charts make clear, Enable Midstream is more exposed to volatile energy prices than many other midstream MLPs, as only about half of its margins are secured by long-term, fixed-fee contracts with minimum volume commitments, or MVCs.

The MLP's direct margin exposure to commodity prices is only 19%, and 22% for 2015 and 2016, respectively. However, a good deal of Enable's "other fee-based" contracts -- especially in its gathering and processing segment -- are indirectly exposed to energy prices because they're volume dependent.

That means that should low energy prices persist and cause oil and gas producers to reduce output, the MLP's cash flow and margins could take a beating. That's especially true since Enable Midstream's protective gas, oil, and propane hedges are set to decline from 68%, 94%, and 89% of second-half 2015 volumes, respectively, to just 22%, 60%, and 39% respective volumes in 2016.

That kind of commodity exposure is largely why Wall Street is so nervous about Enable's distribution security and growth prospects going forward, and why its yield is in the stratosphere.

Distribution security and growth prospects
In the first half of 2015, Enable Midstream reported that its adjusted EBITDA declined 9% to $401 million and resulted in a 19% decrease in distributable cash flow, or DCF, which is what funds the quarterly payout.

Its three- and six-month distribution coverage ratios, or DCRs, came in at 1.01, and 1.05, respectively, indicating that falling energy prices have brought the current payout to the knife's edge of long-term sustainability.

However, despite Enable Midstream's significant commodity risk, management is confident that it can not only secure the payout but also grow it. In fact, Enable Midstream expects to grow its distribution at a 3% to 7% annual rate between 2015 and 2017 while maintaining a DCR of at least 1, thanks to $2.4 billion to $3.6 billion in growth projects and potential acquisitions it hopes to make during that time.

Of course, many of those projects will also face exposure to volatile energy prices, so management's rosy distribution guidance is based on some key assumptions about the future prices of natural gas, NGL, and oil.

With natural gas and West Texas Intermediate oil prices at $2.56 per MMBTU and $45.70 per barrel, respectively, as of Sept. 25, management's assurance that the payout is currently safe and will continue to grow requires that oil and gas prices rise by at least 20% and 17%, respectively, by the end of the year and remain that high for all of 2016.

While it's possible that energy prices will recover to that extent, most analysts don't believe this is likely to happen because of the ongoing supply glut in both commodities. In fact, the Energy Information Administration estimates that WTI will average only $54 a barrel through 2016, which could force Enable Midstream to cut its distribution next year if that forecast proves accurate.

Takeaway: Enable Midstream's sky-high yield is well deserved
I continue to be bullish on the long-term growth of America's shale oil and gas and thus think a good case can be made for Enable Midstream Partners as a fine long-term income investment.

That being said, given the relatively high commodity exposure the MLP faces, and the overly optimistic assumptions for a strong short-term recovery in oil and gas prices required to secure and grow its distribution, I think Enable Midstream's 10% yield is warranted. Thus, any income investors who want to acquire units at today's prices should be aware of the increased risks and allocate their diversified income portfolios accordingly.

Why Units of Enable Midstream Partners Plunged Nearly 59% in March