Please ensure Javascript is enabled for purposes of website accessibility
Log In Help Join The Motley Fool
Free Article Join Over 1 Million Premium Members And Get More In-Depth Stock Guidance and Research
By Evan Niu, CFA - Sep 29, 2015 at 10:00AM

Apple shatters another record for its iPhone launch weekend, but there's still an important wrinkle to this story.

Well, would you look at that. It seems that check-in start-up Foursquare's number-crunching methodology ain't half bad. It sounded strange when, over the weekend, Foursquare put out an estimate predicting Apple (AAPL 0.11%) could sell over 13 million new iPhones based on local foot-traffic patterns; most of the time these calls come from Street analysts. In any event, selling 13 million new iPhones is precisely what Apple did. 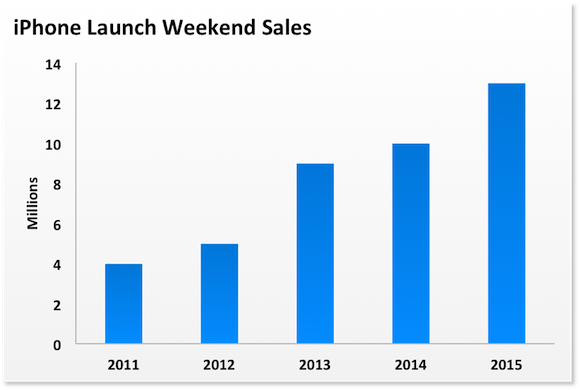 Using last quarter's iPhone average selling price of $660, which has been fairly consistent after 2014's launch of the bigger models along with the new storage pricing structure, Apple likely had an $8.6 billion weekend.

Why 13 million is a little less impressive than you think
Not to undermine this accomplishment, but there is one huge difference between the 2014 launch and the 2015 launch that can't be ignored: China. China is an incredibly important market to Apple, but you already know that by now. Last year, China was not included in the first round of countries for the initial launch of the iPhone 6 and 6 Plus. Those models launched on Oct. 17 last year.

In fact, that difference in China availability is also why 2014's launch sales of 10 million showed relatively modest growth from 2013's launch sales of 9 million, since China was included in the first round of countries for the 2013 launch of the iPhone 5s and 5c. The growth of 3 million units from 2014 to 2015 is likely entirely attributable to China. For instance, the iPhone 5 launch in 2012 moved 2 million units, and that was before China Mobile (CHL) was an official iPhone carrier.

China's inclusion (or lack thereof) has a massive influence on the reported figures. A picture is worth a thousand words. 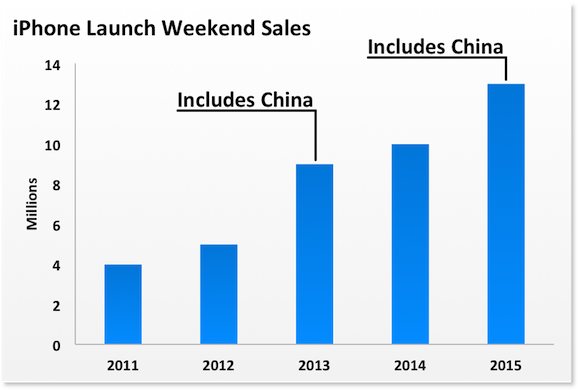 Again, none of this is to discount the obvious success of the iPhone 6s and 6s Plus. Rather, you have to acknowledge this context when comparing the year-over-year figures.

Flat is fine
There's another potentially important implication here though. If China accounted for 3 million units or more from the launch, which is very probable considering the early indications of preorder activity, then that implies that the launch posted relatively flat organic growth.

While investors generally have an insatiable appetite for growth, the reality is that eventually Apple's iPhone business will peak in terms of unit volumes. As Apple defies gravity each and every year, this becomes an inevitability. Investors have to make peace with this idea, because it will happen, but that's also completely fine. Considering the sheer scale and profitability of Apple's global iPhone business, maintaining it is an accomplishment in and of itself.

Besides, it's not as if Apple is expensively priced for growth anyway.