The stock of the galvanizing and electrical equipment company continues to beat the S&P 500 on a yearly basis. Why?

Unlike many stocks in the industrial sector, AZZ Incorporated (AZZ 0.64%) has significantly outperformed the S&P 500 in the last year. However, this isn't really due to any large help from its end markets.

Instead, the company has executed well on its plan to recover margins in its energy segment while increasing growth opportunities in the galvanizing segment with the acquisition of U.S. Galvanzing from Trinity Industries and the planned construction of a new galvanizing plant in Nevada. It's pretty much a "self-help" story, and the recent second-quarter results acted as confirmation of the progress the company has made. Let's take a closer look: 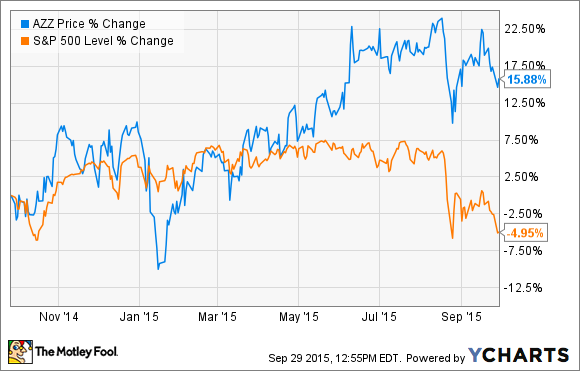 As you can see above, AZZ slightly missed expectations in the second quarter, but full-year 2016 guidance was maintained. In a sense, the latter is more important for two reasons. First, the second quarter tends to be a relatively slow quarter for its energy segment. Second, in previous results presentations, CEO Tom Ferguson had primed the market to expect large nuclear contract orders (which were pushed out from last year, causing AZZ to cut guidance for 2015) to be filled in the second half of its fiscal 2016. In other words, the maintenance of guidance is an indication that he expects those orders to be filled as planned.

Energy segment margin recovering
The chart below demonstrates the impressive margin recovery in the energy segment -- margins have expanded significantly in the last four quarters on a quarterly comparison basis. It's something that Ferguson saw fit to highlight in the earnings presentation. "We continued to make progress improving the operational performance and profitability of the energy segment, particularly in our WSI specialty welding business. During the quarter, we shipped some long-anticipated project backlog out of NLI."

The news about NLI, AZZ's business that offers critical and safety-related equipment to the nuclear industry, is further indication that the company is on track to fill the pushed-out nuclear orders in the second half. Meanwhile, the operational improvements indicate that AZZ is largely over the issues with "operational inefficiencies" in its energy segment -- most clearly seen in energy margin in the second quarter of 2015. 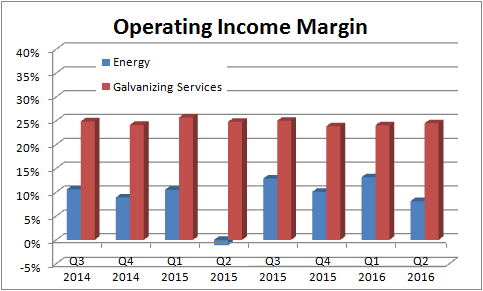 In short, AZZ's internal execution in the energy segment is enough to help take the stock higher.

Galvanizing segment expansion
The last chart above shows how AZZ generates larger margins from its galvanizing segment, but it also demonstrates that margins have been relatively flat in recent quarters, again on a quarterly comparison basis. Essentially, the growth story here isn't about margin expansion per se. Rather, it's about growth through expansion.

Ferguson outlined that the new galvanizing plant in Reno, Nevada, was "solidly on schedule" and declared himself "pleased with the progress our team has accomplished with the integration of the recently acquired U.S. Galvanizing operations." Indeed, according to Ferguson, the 11.4% increase in galvanizing sales in the quarter was "primarily due" to the impact of the U.S. Galvanizing acquisition in the quarter -- although management also affirmed on the earnings call that there was organic growth in the segment. 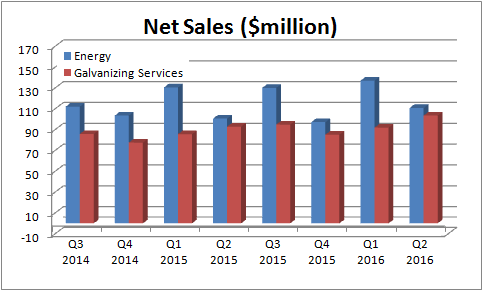 The takeaway
All told, AZZ continues in recovery mode in its energy segment, and its galvanizing segment looks poised for future growth due to expansion plans. The company is executing well in a difficult economic environment and investors are being rewarded as the stock is being de-risked from previous operational difficulties. It's a useful reminder that some stocks don't necessarily need stronger end markets in order to perform well.