Please ensure Javascript is enabled for purposes of website accessibility
Log In Help Join The Motley Fool
Free Article Join Over 1 Million Premium Members And Get More In-Depth Stock Guidance and Research
By Tim Beyers - Sep 29, 2015 at 10:00AM

A massive bet on 2017 options has risks, but the odds favor a double.

As of right now, Disney (DIS -0.70%) stock and options account for 32% of my family portfolio. Seem crazy? Possibly, but I don't think so. Allow me to explain why.

A force to be reckoned with
In May, I predicted that Star Wars: The Force Awakens would lead Disney to more than $3 billion in studio profits in fiscal 2016, which kicks off next week. That's a huge number by any standard, but for Disney, it would represent a near-doubling of 2014 Studio Entertainment operating profit. Mix in huge sales of Star Wars-themed clothes, toys, collectibles, books, and more, and you have the makings of further acceleration in Disney's already high-margin Consumer Products business.

What might that mean practically? Let's simplify and say that Disney's best case is a doubling of Studio and CG operating profit from last year's levels, or $5.81 billion combined. A reasonable midrange case might be 50% growth -- remember, we're talking about Star Wars here -- leading to $4.36 billion.

Yet that's probably too conservative. According to S&P Capital IQ, pre-tax operating profit rose 21.3% in fiscal 2014 after rising 7.6% the year prior, and 12.9% in fiscal 2012, which is also the year Disney took full control of production and distribution of Marvel Studios movies.

I'd also point out that Disney has enjoyed rising margins in recent years. Net margin has improved from 11.8% in fiscal 2011 to 16.1% over the trailing 12 months, S&P Capital IQ reports. As we head into fiscal 2016, Disney isn't just making more from its properties; it's making more from every dollar of revenue produced by its various businessess.

A super-powered stock, stopped in its tracks
All of that would be enough to get me adding to the common stock at recent prices. To invest in LEAPs, I also need better-than-average odds of catalysts materializing before expiration. In this case, we have a potential record setter in Star Wars: The Force Awakens in December, followed by Captain America: Civil War in May of next year. Disney films could be responsible for $4 billion in global box-office receipts in fiscal 2016.

Mix in the stock action, and I suspect there's a good chance Disney gets to $126 a share sometime during the next 12 months, the price at which my bet becomes a double. The stock already topped $121 in early August: 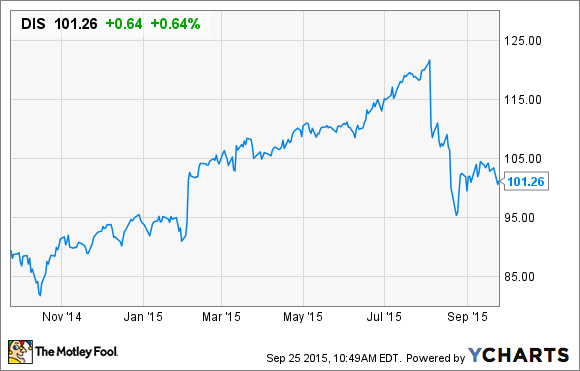 The trade
Unlike more speculative investors, I like to purchase LEAPs that are already in the money. That way, if my thesis proves to be wrong, there's still a decent chance of recovering some principal before the intrinsic value if the option falls to zero.

In this case, I purchased Disney LEAPs at an $85 strike price when the underlying stock was still trading for about $98 a share. That's roughly $13 a share in intrinsic value, which I figured was a reasonable cushion. The downside, of course, is that protection doesn't come cheap. Here, I paid $20 per share for every contract I bought. And since options contracts are sold in 100-share bunches, it's easy to see how this became an expensive bet.

Again, it sounds crazy. Option pricing is subject not only to the volatility of the market and the underlying stock price, but also time. Every day that passes is another day the contract loses a portion of its "time value." Investing in options can be like playing a game of beat the clock. I never play unless the odds favor a big win.

Here are the scenarios as I figured them:

Would you have made this trade? Tell me on Twitter, or reach out on Google Plus. I may use your comment in a follow-up article.