Back at Intel's (NASDAQ:INTC) 2012 investor meeting, the company outlined its bold plans to become a major player in the smartphone and tablet chip markets. Indeed, the following slide nicely summarizes where the company thought it would be in the mobile market by now: 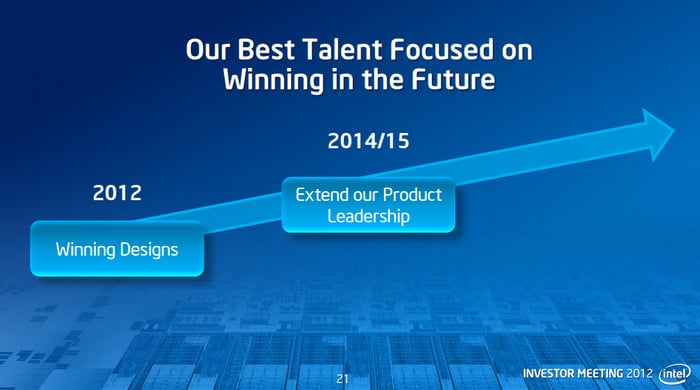 Although Intel did "win some designs" in 2012, the company failed miserably in "extending its product leadership" during 2014 and 2015. The company has yet to field leadership smartphone or tablet platforms, which, in my view, is the key reason that the company has done so poorly in the mobile market.

Indeed, the company lost $4.2 billion in mobile during 2014 and is on-track to lose about $3.4 billion during 2015 as it cuts costs and improves the platform bill of materials costs associated with its mobile platforms. However, this is still an extremely poor showing.

I suspect that things will yet again get better as Intel's product portfolio once again sees a slight improvement (i.e., even less contra-revenue required to support its platforms), but all told the segment will continue to be disappointing to investors. Here's why.

Not much interesting coming down the pipe

Next year, Intel is expected to launch the following products:

SoFIA LTE, a low-end integrated applications processor and modem built on a foundry 28-nanometer manufacturing process, was supposed to launch in the first half of 2015, but it was delayed to the second half of 2015 and then into the first half of 2016. I suspect that SoFIA LTE would have been competitive had it launched on time, but in early 2016 I believe it will be outclassed by solutions from MediaTek and Qualcomm (NASDAQ:QCOM).

SoFIA LTE 2 is Intel's first low-end integrated applications processor and modem built on its 14-nanometer manufacturing process. This part was originally supposed to launch in late 2015 or early 2016, but a recent report from DigiTimes claims that it is now on-track for launch in late 2016.

Even if this part is competitive, it won't be available for long during 2016, meaning that any potential financial "good news" associated with the product will probably be felt in 2017 rather than 2016.

Finally, Intel is expected to launch Broxton next year. This is a high-end standalone applications processor. I suspect that it will do well enough in higher-end Android and Windows tablets, but it won't do all that well in phones, as it lacks an integrated modem. I also suspect that it will feature worse CPU, graphics, and imaging performance than Qualcomm's upcoming high-end Snapdragon 820.

Better luck in 2017?
I suspect that at Intel's investor meeting this year, the company will guide to another reduction in the losses associated with its mobile group, although I expect those losses to still be substantial in 2016.

In my view, Intel's next "big chance" to become truly competitive in the mobile processor market will come in 2017, when it has transitioned its key products to its own 14-nanometer manufacturing process. That said, although Intel's products should benefit from a transition to a much better process by the end of 2016, the competition will probably transition to foundry 14/16-nanometer manufacturing technologies, dulling any potential process-related lead.

Further, even if Intel has a slight manufacturing lead in this area, the company hasn't yet proved that it can consistently deliver competitive mobile-chip architectures.

I think if Intel executes properly, its mobile business can start to show some real signs of life in 2017. However, from what I can tell, 2016 will be another very disappointing year in mobile for the chip giant.