Diversified industrial giant Illinois Tool Works (NYSE:ITW) stock has notably underperformed the S&P 500 this year -- however, it's not the only one. As the chart below shows, many industrial stalwarts have gotten caught in the headwinds building up against the sector. The stronger U.S. dollar, a soft capital spending environment, declining energy capital expenditures, and weaker growth in China and other emerging markets have made conditions difficult. That said, the company's execution of its five-year enterprise strategy remains on track, and much of its operational effectiveness looks set to improve. Does this make the current weakness a buying opportunity for you? 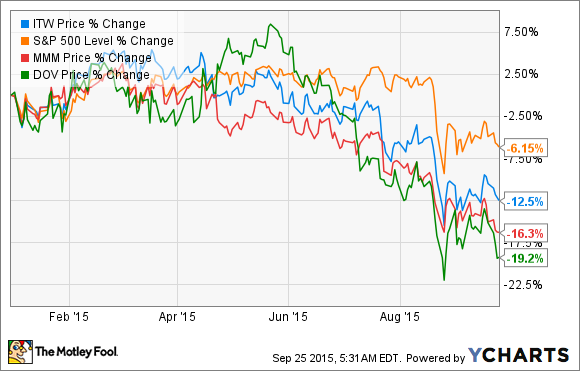 The impact of the headwinds discussed above is best seen in the reduction in full-year organic sales growth guidance. Management started the year expecting 2.5% to 3.5% growth, only to cut expectations to 1% to 2% at the time of the first quarter, and then reduce the target to "approximately 1%" in the second-quarter earnings presentation.

Clearly, investors can't expect much help from the economy in 2015, and a look at organic revenue growth across each segment shows that highly cyclical areas like welding and test and measurement and electronics have seen conditions deteriorate in 2015. 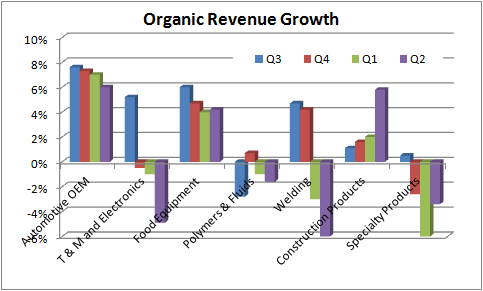 However, the company is in the middle of a five-year enterprise strategy designed to increase margins and return on invested capital, or ROIC. As such, margin expansion has remained good across the board. 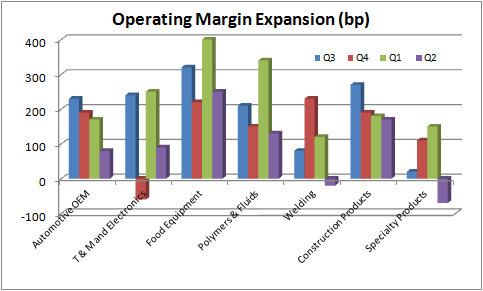 In a nutshell, Illinois Tool Works is managing to increase margins even while revenue growth is slowing. The end result is that management expects full-year EPS to be in the range of $5.07 to $5.23, an increase of 8.6% to 12% compared to last year. Meanwhile, analysts expect reported revenue to decline 6.3% in 2015. Using the midpoint of company guidance, the stock currently trades on a full-year 2015 P/E ratio of around 16 times.

Looking ahead
Clearly, the investment case for the stock is based on the idea that underlying earnings and margin expansion are successful thanks to the enterprise strategy plan. Moreover, when the company finishes the plan in 2017, its end markets could be looking a lot better, and the company will be well positioned to grow in the future.

Essentially, management expects ROIC to be 20% or above by 2017 and operating margin to be around 23%. Here is a graphical demonstration of the expected improvements: 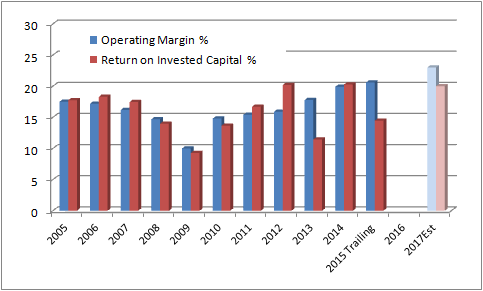 2 questions
The key questions that you need to ask are:

Ultimately, the answers to these questions are somewhat interlinked. If the economy keeps going against the company, then it's reasonable to expect that margin growth will be hard to achieve. Indeed, if you look at the first two charts above, the increasing reliance on three segments (automotive, food, and construction) for revenue and margin growth suggests that pressure is building up. 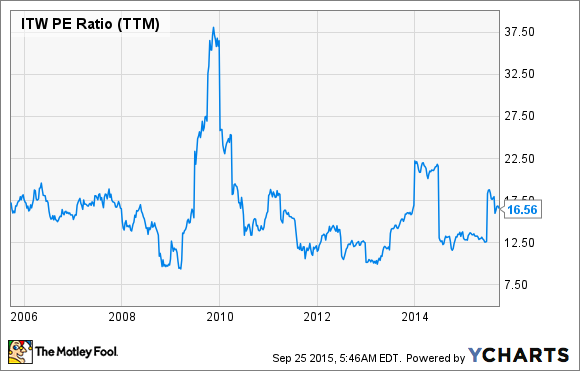 Should you buy the stock?
Analysts expect EPS of $5.94 in 2017, which, based on the current price of around $83, would put the stock on a 2017 P/E ratio of 14 times. Based on the last 10 years' valuations, the stock looks like a reasonable value; the problem is the increased risk from the headwinds the company faces.

All told, Illinois Tool Works is an attractive stock if some of the headwinds mentioned above start to turn around, but in my view, the stock isn't worth buying purely for the sake of the margin improvements implied in its enterprise strategy plan.