Please ensure Javascript is enabled for purposes of website accessibility
Log In Help Join The Motley Fool
Free Article Join Over 1 Million Premium Members And Get More In-Depth Stock Guidance and Research
By George Budwell - Sep 29, 2015 at 7:01AM

Sun Pharmaceuticals has been shining so far this year. But regulatory headwinds have caused the drugmaker's shares to pullback from the former highs in recent weeks. Here's why the stock may now be a compelling long-term buy.

Sun Pharmaceuticals (NSE: SUNPHARMA.NS) has transformed itself into India's largest pharma company and the fifth-largest generic drugmaker in the world, through its acquisition of Ranbaxy Laboratories earlier this year.

This deal helped to send shares up by a lofty 60% at one point this year. Nonetheless, the stock has since retreated from these former highs because of a U.S. import ban on some of Ranbaxy's products -- most notably the drugmaker's generic versions of AstraZeneca's heartburn medication Nexium and Roche Holding AG's anti-cytomegalovirus medicine Valcyte.

Taken together, these issues caused Sun to miss consensus on its total product sales in the most recent quarter and to issue a revised downward annual guidance, calling for flat or slightly negative sales growth for the remainder of the year.

Despite these headwinds, however, Sun may be a great pickup for investors with a long-term outlook. Here's why.

Fixable problems
One of the first issues investors need to understand is that the FDA regularly issues Form 483s. In fact, nearly every pharma company eventually receives one at some point.

Amgen and Pfizer, for instance, have reportedly both been tagged for problems at some of their manufacturing sites this year. And the agency has already issued over a 100 Form 483s in 2015, showing this is a common problem across the industry and not a problem unique to Indian companies such as Sun.

Most importantly, Sun should be able to work through the FDA's concerns in a matter of months, not years, meaning that it could be back to full manufacturing levels by 2016.

At present, management has warned investors that profitability is likely to be negatively affected by these restrictions, as well as the ongoing integration of Ranbaxy, through the end of its current fiscal year (March 2016). Once these one-off issues are resolved, though, we should therefore see a nice upswing in Sun's U.S. sales, hopefully by mid-2016 at the latest.

Uniquely positioned to take advantage of hypergrowth
India is a country with around 1.2 billion people, with the vast majority living in rural areas with little to no access to healthcare. But that situation is rapidly changing as India continues to modernize its infrastructure, giving its citizens wider access to medicines in the process. 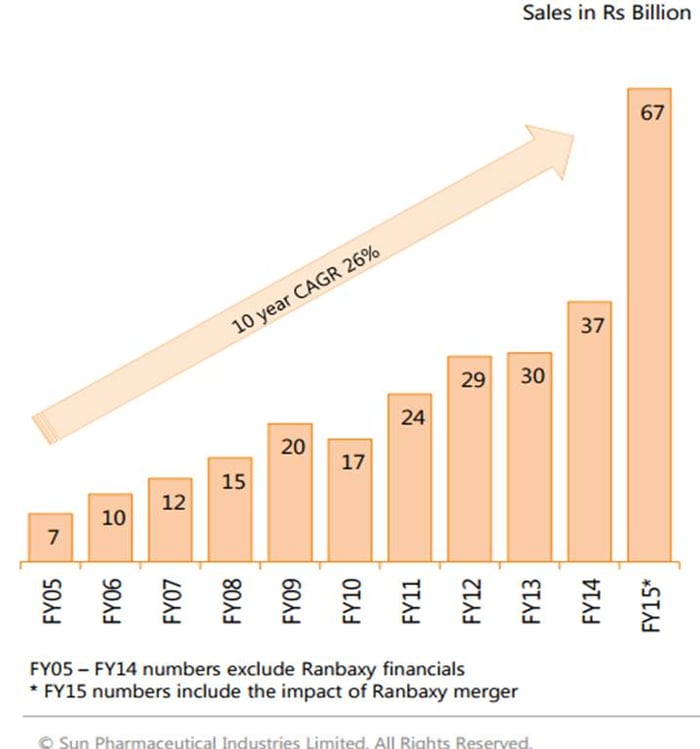 Although the Indian pharma market was only valued at around $12 billion in 2013, this greater penetration into rural markets is expected to drive an astounding compound annual growth rate of around 24% for the next decade, according to the Pharmaceutical Export Promotion Council on the India Brand Equity Foundation, making it one of the fastest-growing pharma markets in the world.

Sun presently owns a 9% share of the entire Indian pharma market, and the company has been seeing a CAGR of 26% in this pivotal business segment over the last decade. As a result, product sales in India now make up about a quarter of Sun's total revenues at the moment, showing its importance to the company's top and bottom lines.

The key issue to understand, though, is that Sun's own impressive CAGR to date in the Indian market essentially reflects a "rising tide lifts all boats phenomenon." As this market is projected to grow by similar levels for at least the next decade, I think there's good reason to believe this monstrous growth trend will continue to move forward, especially in light of the company's strong footprint in the country.

Is Sun a buy right now?
I think the answer is yes. The regulatory concerns raised by the FDA are issues that can be revolved in the short term, and the massive growth potential of the Indian market as a whole suggests that Sun has a long growth trajectory ahead of it.