Please ensure Javascript is enabled for purposes of website accessibility
Log In Help Join The Motley Fool
Free Article Join Over 1 Million Premium Members And Get More In-Depth Stock Guidance and Research
By Justin Loiseau - Sep 29, 2015 at 7:56AM

Are you ready for this solar roller-coaster ride?

Solar is soaring. So far, solar energy has accounted for a whopping 40% of all newly installed U.S. electric capacity in 2015. But one of the factors fueling solar's rise is about to vanish. As solar investors, here's what you need to know.

Solar Sam
Way back in October 2008, Uncle Sam decided to support solar energy. With the enactment of the Federal Business Energy Investment Tax Credit, or just "Investment Tax Credit" (ITC) for short, solar installation companies qualified for credits equivalent to 30% of expenditures, with no maximum credit.

That credit was the spark that lit the solar industry's fire. For first-mover companies like First Solar (FSLR 0.68%), the ITC was key to scaling. First Solar's sales skyrocketed after 2006 and have only evened out in the past few years. And although it's impossible to prove causality from correlation, total cost was the primary factor holding solar back from gaining a competitive advantage against other fuels. 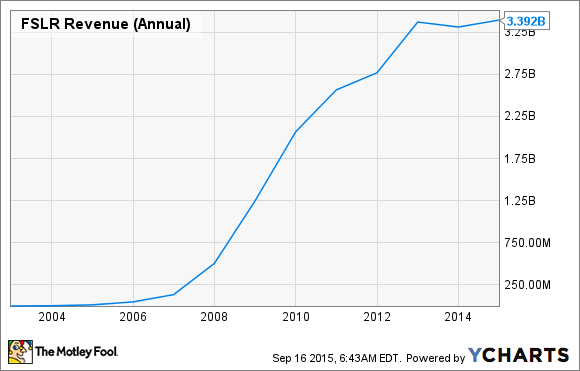 For residential customer-facing company SolarCity Corporation (NASDAQ: SCTY), the ITC has proven to be a powerful ally. SolarCity's smart offer to handle all the tax credit paperwork on behalf of its users made solar rooftop installation both easy and affordable, a necessary innovation for the average American. For this and other potential tax credits, SolarCity notes on its website: "Navigating through government energy rebate programs on your own can be intimidating. SolarCity will identify all the qualifying solar energy tax credit and rebate programs for your system and help you file the required paperwork or file it on your behalf."

As of Q2 2015, the U.S. is now home to more than 20,000 MW worth of solar panel kits. That may seem substantial, but it's nothing compared to the amount of expected installations between July 2015 and the end of 2016, when the ITC drops from 30% to just 10% for commercial solar installation companies. According to the Solar Energy Industries Association (SEIA), an estimated 18,000 MW will be installed during this 18-month stretch. That's equivalent to the cumulative amount of solar installations through the first half of 2014, and signals a serious ramp-up for solar corporations.

Post-2016, the solar landscape will look remarkably different. In the down time between the ITC's expiration and the start of Obama's solar-supporting Clean Power Plan in 2020, the SEIA expects a major drop in new installations -- and solar companies know it.

In SolarCity's latest annual report, it notes, "Our business currently depends on the availability of rebates, tax credits and other financial incentives. The expiration, elimination or reduction of these rebates, credits and incentives would adversely impact our business." Likewise, First Solar's report states, "Reduced growth in or the reduction, elimination, or expiration of ... economic incentives ... could reduce demand and/or price levels for our solar modules, and limit our growth or lead to a reduction in our net sales, and adversely impact our operating results." Both companies mention the ITC specifically, and neither one beats around the bush when highlighting the significant role it's played in each solar company's business model thus far.

What does this mean for you?
Booms and busts aren't usually things investors look forward to -- but there's one unique aspect to this solar cycle: It's expected. Since there's currently a three-year stretch with no federal incentives, SolarCity Corporation, First Solar, and other solar companies are planning ahead. The entire reason the SEIA expects a boom is because of the bust to follow.

Times may be lean on a quarter-to-quarter basis during that stretch, but the risk associated with those potentially dark years is already baked into the companies' valuations. And for long-term investors, there could be additional upsides. Necessity is the mother of invention, and solar's drop in competitiveness could mean even more effort to cut costs and improve panel efficiency. It could also motivate more states to set up their own incentive structures, pushing the current 50% that don't yet have solar tax incentives to open up their bureaucratic borders, and those that do to increase their incentives even further.