The company's ability to maintain pricing power, more robust spending levels on the horizon, and a dirt cheap valuation suggest Core Labs is a great stock to consider.

Any time that a company loses close to half of its value, just about every investor is going to be nervous about diving into a position. This is especially true for oil services companies like Core Laboratories (CLB 5.55%) since there doesn't appear to be any convincing reasons to think that oil prices are going to recover very soon.

What makes Core more unique than most oil services companies, though, is that the company has much stronger pricing power for its services. Core's suite of services -- reservoir description, production enhancement, and reservoir management -- are all technology-driven offerings that help to improve reservoir and well performance over time, which leads to better economics. Since it's in the best interest for oil and gas producers to pay up for Core's services, it gives the company much stronger pricing power than other services in the oil patch that are more or less commodities.

This pricing power can be seen when you look at Core Labs' margins over the past couple of years. In the past 12 months, Core Labs EBIT margin has declined just over 12% and remains above 25%. At the same time, the big names in the business such as Halliburton (HAL 4.44%) and Schlumberger (SLB 6.54%) have seen margin declines as much as 60% over the same period and are now are in the single digits. 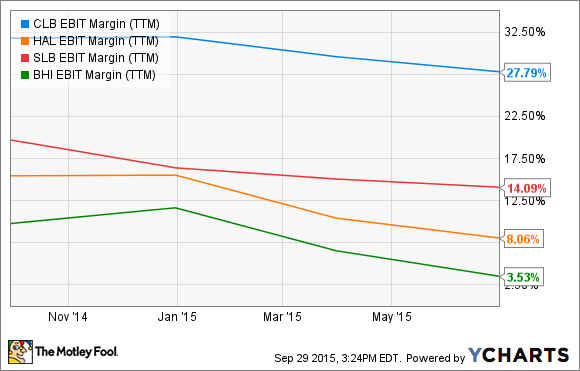 The ability to preserve pricing power throughout the downturn is an extremely valuable trait in a commodity business, and Core has shown it has that power. Sure, it may see a few potential projects get shelved and total revenue could decline, but as long as the company can still generate high margins on that lower revenue base it should be very well positioned throughout the cycle.

Long term demand means increased spending on the horizon
So far this year, more than $220 billion in oil and gas development projects have been shelved as prices have declined. Over the near term, it's hard to argue against these moves. An oversupplied market like this one will make companies either redesign or even completely shelve projects that have higher-per-barrel breakeven costs.

The thing is, commodity markets are like physics: for every action there is an equal but opposite reaction. In this case, lowered capital spending today means less development, and less development to offset the constant decline of oil production from wells means that oversupply can change to undersupply in a hurry.

At a recent speaking event, Core Labs CEO David Demshur noted that the everyday production at existing wells getting smaller, and the global decline rate is about 2.5%. Even more surprising is that Demshur noted at today's drilling activity in the U.S., the decline rate is greater than 10%.

Eventually, these decline rates and the reduced levels of spending will catch up to the industry. As you can imagine, this will lead to higher prices and, in turn, greater spending and activity from producers as those producers look to play catch-up from delayed spending. Many companies will look to Core Labs to maintain production levels at existing facilities as well as evaluate the production potential of new sources. This combination could lead to a boom in Core's business in the coming years.

Valuation hasn't looked this good in a while
Even though the company has been reasonably able to maintain its profit margins during this decline, shares of the company have not reflected that. Over the past 18 months, shares of Core have been the worst performer when compared to those same oil services giants. 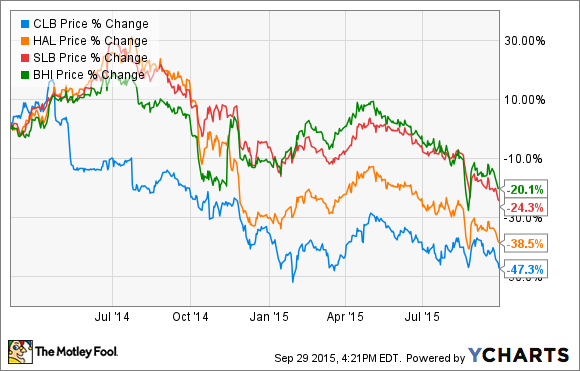 You could argue that the Halliburtons and Schlumbergers of the world have the size and scale to manage a downturn like this, but based on Core's performance, it seems that shares have taken an unfairly large hit.

It can be hard to do a valuation for Core Labs because the company returns so much cash to shareholders. Since its cash flows exceeds its earnings, its price to earnings can make the company seem a little more expensive than it is. Also, because it has repurchased so many shares, the company technically has no common equity on the books -- repurchased shares are carried as treasury stock and are deducted from common equity. So, the best measure we can use to value Core is on a price-to-free-cash-flow basis. Looking at this metric, shares haven't been this cheap since 2010. 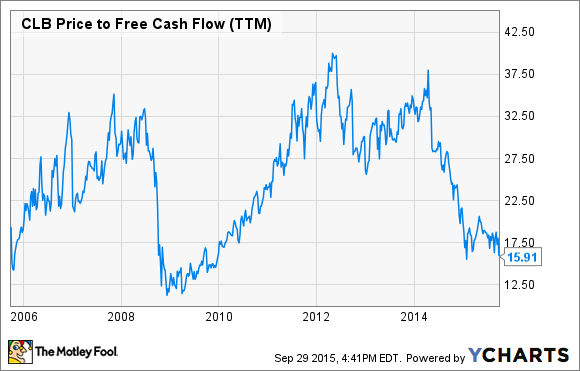 What a Fool believes
There is no surefire method of determining whether we have hit the bottom of the cycle or not. There are lots of signs that the oil and gas market could improve, but there are just as many that suggest things could stay bad for a while.

Even if the oil market does remain less than ideal for a while longer, though, the case for buying shares of Core Labs for the long run looks pretty compelling. The company's ability to preserve its margins in a downturn, the longer-term potential for its services when the market does indeed turn, and today's bargain-basement prices suggest that those looking for a long-term investment should take a hard look at Core Labs' stock.