Speculation is driving this generator manufacturer today, but now may not be the time to buy.

What: Shares of Generac Holdings (GNRC -1.27%) surged 10.4% on Wednesday on speculation that Hurricane Joaquin could create a boost for demand.

So what: Hurricane Joaquin is getting stronger in the Atlantic Ocean and appears to be on its way to the New York area. The National Hurricane Center projects the storm will hit the East Coast on Monday morning, and as of now, it's headed straight for the New Jersey Coast. By then, it could be a Category 1 hurricane.

This may bring back memories of Hurricane Sandy, and that's exactly what traders had in mind today. Generac is a leading manufacturer of portable and home backup generator systems -- the kind of generators that were in high demand in the aftermath of Sandy. That storm also had a big impact on Generac's bottom line: Net sales in the fourth quarter of 2012, when Sandy hit, jumped 28% from a year earlier and net income was up 17%. 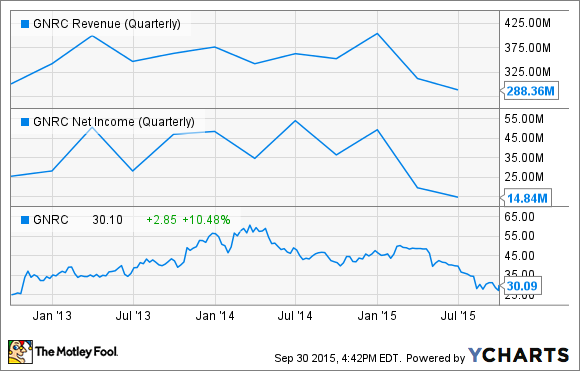 Now what: The stock market is often a speculation machine, and that's at work in Generac Holdings today. A hurricane hitting the East Coast could, in fact, have a positive impact on results, but it would be a short-term boost to demand rather than a long-term one. You can see above that Hurricane Sandy had a positive impact on revenue, net income, and the company's stock price, but the boost didn't last, and buying on a pop like the one today could be dangerous for investors.