According to a research report from GlobalData, the second major tranche of the so-called pharmaceutical patent cliff is set to begin in 2016. Although it won't be as steep as the first wave that occurred between 2010 to 2013 and claimed $95 billion in revenue, the industry is projected to lose yet another $65 million in sales from top drugs over the period from 2016 to 2019.

On the bright side, Big Pharma appears far better prepared this time around. Most companies have been successful at developing important new classes of drugs that should be able to more than offset these forthcoming losses, and perhaps usher in another golden era for the industry as a whole.

Before entering the promised land, however, the industry needs to get through a crucial 2016 chocked full of clinical and regulatory catalysts. I think investors therefore may want to keep close tabs on the bellwether pharma company AstraZeneca (NASDAQ:AZN) next year. Here's why.

AstraZeneca is a microcosm of the patent cliff and its impact on the industry
Everything that has come to define the patent cliff can be found within the walls of the British pharma giant AstraZeneca. The loss of patent protection for the drugmaker's heartburn medication, Nexium, and asthma drug, Symbicort, have smashed the company's top line this year.

Total product sales, for example, are on track to fall by 5.4% for the year in 2015. And with the cholesterol-lowering drug Crestor scheduled to lose patent protection next year, Astra's top line should drop by another 4% in 2016.

So, like many of its peers facing similar problems, Astra has had to lay off big chunks of its workforce and cut costs where possible to keep its falling top line from cratering its bottom line. Fortunately, these efforts have paid off, with the drugmaker's core EPS remaining fairly stable during this period of major upheaval.

The patent cliff has nonetheless forced Astra to reinvent itself in many ways. Specifically, the drugmaker has shifted its primary business interests, placing a much heavier emphasis on high-growth markets such as diabetes and oncology.

After buying Bristol-Myers Squibb out of the duo's diabetes alliance franchise last year, Astra has quickly emerged as a leader in this huge market, making it one of the drugmaker's most important growth drivers.

Next year should prove to be a pivotal time in Astra's diabetes research efforts, with several clinical milestones expected to be reached across its broader experimental line of diabetes product candidates: 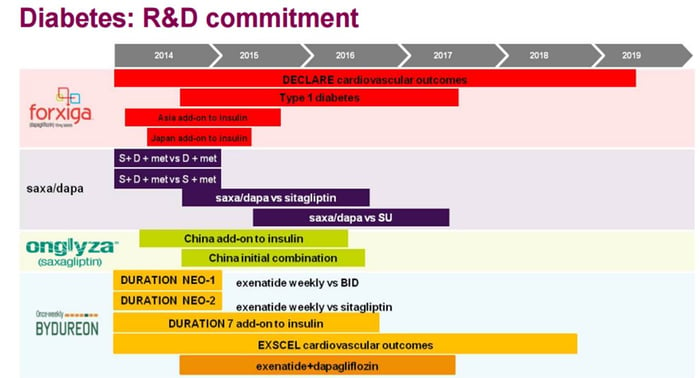 But Astra's real hopes for growth stem from oncology, with immuno-oncology being an area of particularly strong interest for the company and its shareholders. 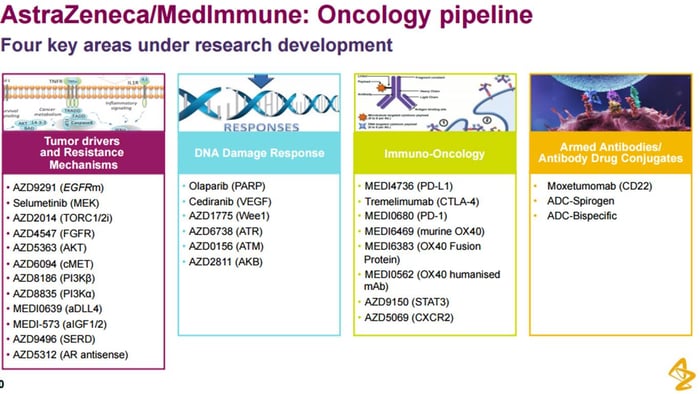 Like many of its Big Pharma brethren, Astra is making a big push into oncology because this market is one of the fastest growing pharmaceutical segments, new drugs tend to command a premium pricing structure, and their revenues have proven to be extremely stable over long periods of time.

When you combine this rosy outlook with the fact that most immuno-oncology drugs or therapies tend to be biological-based products that inherently come with longer-than-usual periods of exclusivity -- given the onerous regulatory framework in the U.S. for biosimilars (generics) -- it becomes blatantly clear why many large-cap pharmas have thrown their proverbial hats into the cancer immunotherapy ring of late.

So, Astra's success or failure in immuno-oncology could be a telltale sign for how the industry as a whole will fare going forward.

Looking ahead, Astra's cancer immunotherapy pipeline presently has 16 mid- and late-stage trials ongoing, and several of these trials should report top-line data next year. In fact, I strongly suspect that Astra will provide investors with a major update on its immuno-oncology program at the 2016 American Society of Clinical Oncology meeting to be held next June.

Tying it all together
Because many large drugmakers are pursuing similar areas of research, their fates are probably more intermingled than investors may understand at present. My belief is that Astra is likely going to be viewed as the "canary in the coal mine," so to speak, when history has its say.

After all, Astra's ability to put the ongoing patent cliff behind it once and for all really starts next year when the last of its major drugs, Crestor, loses exclusivity. Topping it off, the fate of the drugmaker's research efforts into novel products and markets should start to become clear in 2016 as well. If Astra falters in its plan to successfully move beyond its legacy products starting in 2016, though, this could spell disaster for the wider industry.

Keeping with this theme, Astra, along with many other Big Pharmas, are pinning their hopes specifically on immuno-oncology to deliver game-changing new products that will drive top- and bottom-line growth for years to come. As Astra's immense research effort into cancer immunotherapy should produce numerous clinical updates next year, the industry's faith in immuno-oncology will undoubtedly be put to the test, making this mature Big Pharma stock a key name to keep an eye on moving forward.