What: Shares of Kinder Morgan Inc. (NYSE:KMI) joined those of a number of energy industry peers by slumping badly in September. There were a number of catalysts that fueled its slump last month, including oil prices dropping 8.5% for the month, two of its peers finally agreeing to an underwhelming merger agreement and another delay for the company's key oil sands pipeline expansion project. However, none of this is thesis changing for the company, which is why its CEO is pointing to "indiscriminate" selling by the market.

So what: If we look at the stock's chart, we see that the biggest downdraft happened toward the very end of the month. 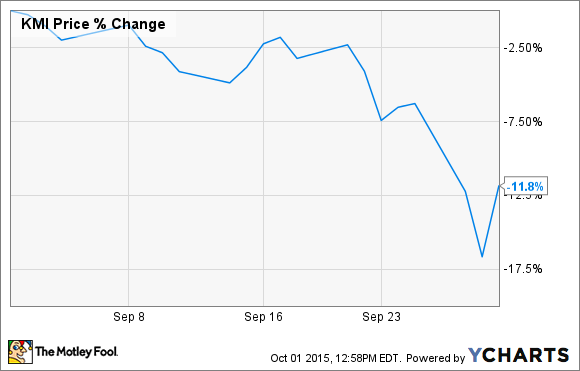 Aside from the persistent weakness in oil prices, which has a limited impact on Kinder Morgan, there were two notable catalysts fueling the late month sell-off. The first one happened on Sept. 25 when Canada's National Energy Board again delayed its recommendation on the company's Trans Mountain pipeline project, saying it needs more time to gather information. This pushes back the potential recommendation for the approval of the pipeline from January of next year till May. That also not only pushes back the potential in-service date of the pipeline by a few more months, but heightens the uncertainty that it might not be approved.

In addition to the fact that the company's stock price dropped alongside most other energy infrastructure companies, two of its peers announced on Sept. 28 that they had finally agreed to a merger after months of negotiations. The problem is that the deal price was much less than investors hoped for, suggesting that the future growth potential of the entire sector won't be as strong as expected. Having said that, it's a prime example of the purely indiscriminate selling the stock has seen over the past few months.

Now what: Kinder Morgan's stock price continues to fall for weird reasons. This is despite the fact that its cash flow is largely secured by fee-based assets, which is why it continues to stick by its belief that it will be able to grow its dividend by 10% per year through 2020. At some point, the market should realize it has been behaving rather irrationally as Kinder Morgan's business is largely insulated from weak commodity prices.