Since its founding in 1982, Buffalo Wild Wings (NASDAQ:BWLD) has grown into one of the most familiar names in the casual dining industry. But despite its succinct "Wings. Beer. Sports." tag line, there's more to its success than you might think, from its figure skating roots to its ambitious plans for the future.

Here are 15 facts about Buffalo Wild Wings that may surprise both diners and investors alike. 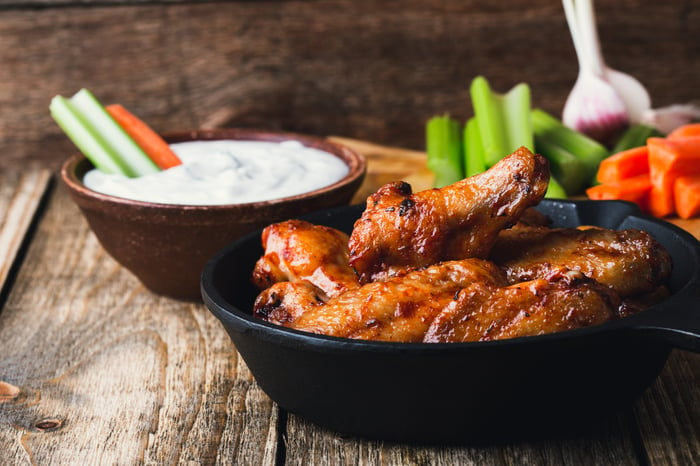 1. It has figure skating roots. Though B-Dubs management regularly describes American football season as its "favorite time of the year," co-founder Jim Disbrow was a longtime figure skating pro in the 1960s, and he later served as president of the U.S. Figure Skating Association from 1998 to 2000. While traveling to Columbus, Ohio, where Disbrow was set to judge an amateur figure skating competition, he and co-founder Scott Lowery came up with the idea for Buffalo Wild Wings after they couldn't find a local restaurant that served the New York-style wings they craved.

2. The original Buffalo Wild Wings in Ohio closed in 2006. But don't worry, it was replaced in 2007 with a massively upgraded 8,000+ square-foot location only two blocks away.

3. B-Dubs waited 29 years to start international expansion. Buffalo Wild Wings' first international restaurant opened in Canada in 2011, almost three decades after the company was founded and eight years after its initial public offering. Since then, Buffalo Wild Wings has opened additional locations in Canada, Mexico, the Philippines, and it just last month opened its first restaurant in Dubai.

4. It wants to (almost) triple its number of locations. At an investor event last year, management outlined long-term plans to grow the number of restaurants to 3,000 worldwide, or nearly triple its current base of just over 1,100. But reaching that goal will take time -- the company aims to have at least 2,100 locations roughly nine years from now, including 1,700 locations in North America and 400 internationally.

5. Buffalo Wild Wings owns stakes in two other restaurant concepts, including a majority stake in street taco specialist R Taco (formerly known as Rusty Taco) and a minority position in PizzaRev, the so-called "Subway of pizza." Keeping in mind there are currently just 29 PizzaRev locations and nine R Taco restaurants in the U.S., both are promising fast casual chains with the potential for nationwide expansion.

6. ... and plans to invest in up to seven more. Shortly after announcing the R Taco investment last year, Buffalo Wild Wings CEO Sally Smith revealed that the company had "probably looked at 200-plus" investment candidates and intends to invest in as many as seven more over the next five years.

7. It's aggressively acquiring franchises, too. Earlier this year, the company spent a whopping $160 million to repurchase 41 franchised locations across Texas, New Mexico, and Hawaii -- and that was on top of 16 separate franchise acquisitions through the end of the second quarter. Though franchising allows restaurants to enjoy a predictable stream of royalty revenue and expand quickly with little overhead, company-owned locations are typically even more lucrative, and they enable Buffalo Wild Wings to ensure a more consistent customer experience.

8. It has a unique pricing structure for its supply of traditional wings. After suffering a massive 30% increase in traditional wing prices over the course of just a few months late last year, Buffalo Wild Wings arranged for modified pricing agreements for roughly two-thirds of its traditional wing supply to reduce volatility. Those agreements went into effect this past April, and according to CFO Mary Twinem, "effectively narrow the range of cost per pound that we will pay when traditional wings are at historically high and low market prices."

10. Buffalo Wild Wings is the largest pourer of draft beer in the country. Similarly, alcoholic beverages comprised around 20% of sales last quarter. According to VP of Food & Beverage Andy Dismore, B-Dubs pours more draft beer than any other company in the U.S. and perhaps more than any other chain in the world.

11. B-Dubs is careful and strategic with price increases. In fact, the company is currently in the process of implementing a three-step price increase to offset higher labor and food costs. First, it initiated a menu price increase on alcohol in August. Then last month, it increased Wing Tuesday and Boneless Thursday pricing in roughly one quarter of all company-owned restaurants. Finally, Buffalo Wild Wings will adjust prices upward for its broader menu on Nov. 2, 2015. Even so, these increases likely won't be noticed by the vast majority of diners as the cumulative impact of price increases over the past year will be just 3.9% in the third quarter and 4.2% in the fourth.

12. Tablet payment and ordering are on the way. In an effort to improve operational performance and the guest experience, Buffalo Wild Wings is testing tablet-based payment and ordering in the second half of 2015. If all goes well, the new functionality will likely roll out nationwide next year.

13. Buffalo Wild Wings wants your lunch money for a reason. In April, the company launched a new systemwide lunch program called "B-Dubs Fast Break." The program targets value-conscious buyers with limited time at lunch, which previously comprised only 19% of total sales. With Fast Break, its goal is to not only increase that share and reduce its reliance on the dinner (49%), late night (16%), and happy hour (16%) dayparts but also -- thanks to the attractive margins on these lunch meals and resulting repeat traffic -- improve its cost of goods sold margin in the process.

14. Old restaurants are getting a new design. Though there's nothing technically wrong with Buffalo Wild Wings' old look, the company is actively remodeling older locations to feature its new Stadia restaurant design. Complete with strategic seating and state-of-the-art sound and video, Stadia aims to mimic the experience a fan might have at an actual stadium. Combined with new restaurant development, the company expects almost 30% of all locations to be Stadia by the end of 2015.

15. Buffalo Wild Wings has crushed the market since its IPO. Buffalo Wild Wings priced its initial public offering at a split-adjusted $8.50 per share in Nov. 2003 and proceeded to skyrocket 35% in its first day of trading. But even if you purchased after that initial pop, you would still be sitting on a nearly 1,600% gain on your original investment today. By contrast, the S&P 500 has returned a respectable 135% over the same period.

The thing is, given all of these intriguing facts, I'm convinced it's not just possible but probable that Buffalo Wild Wings will be able to continue trouncing the market going forward. As the company delivers on its long-term ambitions, I intend to continue holding my shares for the foreseeable future.