Costco (NASDAQ:COST) just closed the books on a stellar fiscal 2015. All the key operating numbers moved solidly higher this year: Comparable-store sales jumped by 7%, membership fees were up 6%, and subscriber renewal rates stayed near a record 91%.

Yet costs are also rising quickly. The warehouse retailer's capital expenditures, or capex, surged 20% higher, year-over-year. Investors can expect an even bigger boost to this spending category over the next twelve months: Management just announced plans to shell out as much as $3 billion on capex in FY 2016. 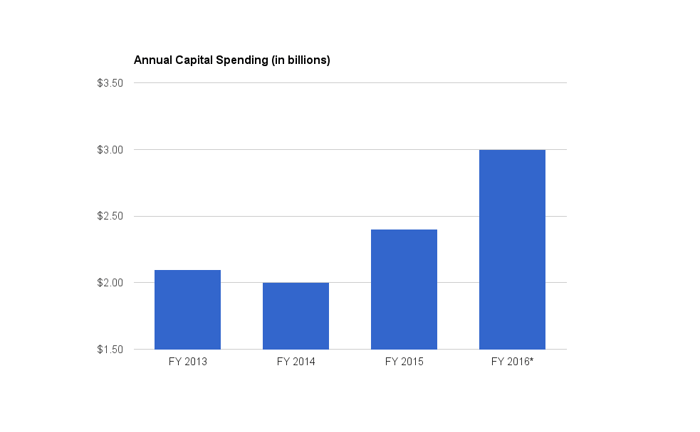 That's a huge chunk of change for Costco, given that annual net income is running at less than $4 billion. So just what does the retailer expect to get out of all this new spending?

Bulking up on warehouses
New warehouses take up the single biggest component of capex. Major expenses here include the cost of constructing the 144,000 square-foot buildings, securing the land, and equipping the stores to handle initial sales volumes of over $100 million per year.

Costco plans to open 32 warehouses in fiscal 2016 -- a record expansion pace for the retailer. By comparison, it added 23 locations last year and its highest new warehouse count over the last decade was the 31 stores it opened in 2007.

New warehouse launches provide a quick boost to membership levels and revenue growth. But the real impact isn't felt until the stores mature into their tenth year and beyond. Costco's newest locations that were opened in the last three years, for example, have averaged $104 million of sales during their freshman years. But that number steadily climbs toward $178 million per year for the Costco warehouses that have been around for over a decade: Boosting gasoline and e-commerce
At the same time, Costco plans to devote significant resources into expanding its non-core businesses at existing warehouses. And that basically boils down to adding gasoline infrastructure. Fueling stations can be found at just over two-thirds of its warehouses, and that percentage has been rising for years.

The expansion isn't happening because management is chasing short-term earnings. In fact, gasoline sales carry lower margins than most of Costco's products. But what it lacks in profit punch, the fuel business make up for in its traffic draw. Gas sales drive more frequent subscriber visits, which is why this product category is a key factor behind the retailer's six-year streak of market-thumping customer traffic gains.

Finally, e-commerce will be an important spending focus for management this year. Costco booked $3.5 billion in online sales last year. And while that's huge in absolute terms, it's still just a tiny fraction of its business.

E-commerce revenue made up 3.1% of sales this year, compared to 7% for the broader retailing industry. Costco has a different approach to online selling than most brick-and-mortar retailers, opting to cautiously expand rather than attack the category by throwing mounds of cash at it. Still, after logging 20% growth in the last year, management sees it as a worthy investment target.

Billions well spent?
While Costco's new warehouse spending will take years to fully pay off, other capex investments have a more immediate impact on operating results. These include remodeling and adding gas stations to existing locations, which should both help push customer traffic levels higher.

Meanwhile, bulking up the online selling and delivery infrastructure will lift earnings since e-commerce is a high-margin business for Costco. Overall, if management is smart about allocating this $3 billion haul -- especially when it comes to the placement of new stores -- then shareholders should see the business continue to strengthen in the years ahead.