As selling moves online, Costco (NASDAQ:COST) is one of the few bricks-and-mortar companies that haven't been smacked by the fundamental retailing shift. In fact, the warehouse giant's customer traffic has been climbing at a market-thumping 4% annual rate for the last six years. That's amazing considering that e-commerce has surged from below 4% of retail sales to over 7% over that time. Shoppers may be buying more and more stuff online, but that hasn't caused them to skimp on their weekly Costco runs. 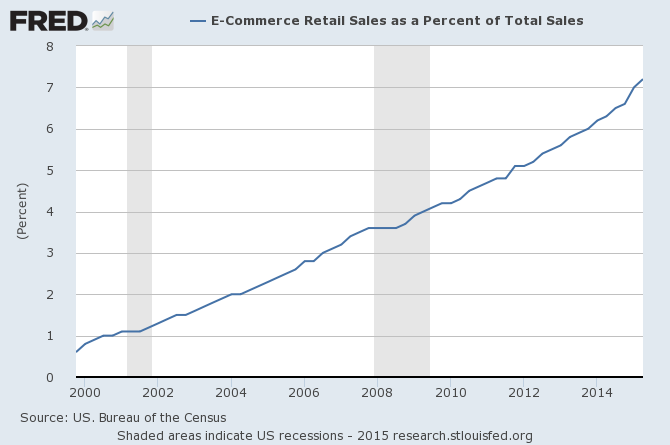 There are several reasons why Costco has bucked this retailing trend. The biggest one is price: Its tiny 3% operating margin makes it less vulnerable to online operators than competitors. Costco has also built up a strong gasoline business that funnels shoppers into its warehouses at increasing frequencies. And its impressive product offerings, from unique store brands and services to low-cost organic foods, keep it one step ahead of online and traditional rivals.

Keeping up with shoppers
Yet Costco understands that it still needs to adapt as customers rapidly change their shopping behaviors. "Our members are increasingly using computers, tablets, mobile phones, and other devices to shop online," management warns in the 10-K. One of the company's biggest business risks, then, they explain, is failing to "develop and maintain a relevant multichannel experience" for these members.

The answer to this problem, at least for many retailing business, has been to merge traditional operations with online initiatives. Home Depot (NYSE: HD), for example, has upgraded many of its 2,300 store locations into fulfillment centers so that customers can buy online and pickup at the store, have an online-only item shipped to any store, or choose to have the product delivered right to their home. This is the same approach that everyone from Wal-Mart to Macy's is taking.

Costco's unique challenge
But Costco can't easily go that route because its store footprint, at just 400 locations, is tiny compared to most national retailers. Executives believe that Costco's high-volume business model limits the retailer in terms of what it can with online ordering. "We're not going to the be company that delivers two different cereals to your doorstep at 7 a.m. as long as you order by 10 p.m. the night before," Chief Financial Officer Richard Galanti explained to investors in last quarter's conference call.

Those limitations could explain why e-commerce accounts for just 3% of Costco's business right now -- compared to 5% of Home Depot's sales and 7% of the entire retailing industry's. The good news is that investors can expect that figure to inch higher. Costco's online business grew at a 21% clip last quarter, well above the 6% comparable-store sales figure it posted. And management plans to launch its online business into three new international markets this year, lifting its e-commerce presence to seven countries out of the nine in which it currently has physical operations.

The best of traditional retailing
But it's clear that many of Costco's key competitive strengths, like its no-frills warehouse setup and limited in-store selection, just don't translate well into the digital world. The real value of a Costco membership comes from things like filing up your car's gas tank, bulking up on consumer staples, and spending less on things like electronics and organic groceries. "We have a unique value proposition," Galanti said, and that involves actually visiting your local Costco store.

Ideally, that strength should insulate the company from big losses to online competitors while its gains in other areas like organic groceries keep sales growth chugging higher. "To the extent that all of us, every brick and mortar loses something to e-commerce, we will probably lose a little less," Galanti said. "But we are also gaining incrementally on market share of other things."