Please ensure Javascript is enabled for purposes of website accessibility
Log In Help Join The Motley Fool
Free Article Join Over 1 Million Premium Members And Get More In-Depth Stock Guidance and Research
By Demitri Kalogeropoulos - Jul 16, 2015 at 8:00AM

Low prices are a win for customers and for the business.

Here are three examples of the many things that hurt Costco's (COST -0.48%) retailing profits.

1. Chicken
The warehouse giant still charges $5 for a rotisserie chicken even though poultry costs are rising. The resulting hit to the bottom line isn't tiny. Costco does so much business on this one product that it could lose $40 million per year by holding the price steady.

2. Executive memberships
Executive members, who pay twice the $55 annual cost for a standard subscription, get 2% of their Costco spending back in cash. That can add up to a maximum $750 rebate every year. And since executive members are becoming a bigger part of Costco's customer base, this is a growing drag on profit margin.

3. Gasoline
Costco's gas business generates much lower earnings than its core retailing sales. Yet the company continues to expand fuel services to more warehouses while aiming to sell gas at the lowest price in the surrounding area.

The list of margin-busters goes on to include everything from tires to baked goods, from gasoline to hot dogs. And they all add up to uniquely low profitability. Costco's gross margin checks in at less than 13%, half what rival retailers manage. 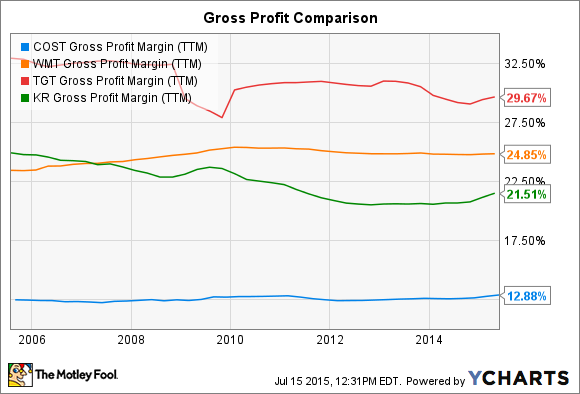 Pricing authority
Costco does this in service of maintaining what it calls "pricing authority." Here's how management describes the goal in the annual report:

That approach demands being ruthless about passing savings on to shoppers. For example, when a Wall Street analyst pointed out that other retailers were boosting their chicken prices, Chief Financial Officer Richard Galanti said Costco was "willing to eat, if you will, $30 million, $40 million a year in gross margin by keeping [rotisserie chickens] at $4.99." "That's what we do for a living," he explained.

Why it works
But wanting to save your customers money isn't the same as having the power to keep prices consistently low. And that strength comes from having a low cost profile, which is where Costco really shines as a retailer.

Its bare-bones warehouses are populated with a slim selection of products that sell so quickly that Costco collects payment for its inventory before it even pays its own suppliers. Business efficiencies like that allow it to profitably operate at much lower gross margins than rivals.

The opposing example would be Whole Foods. Of course, the organic grocer works hard to keep its prices as low as possible. But its mission is to provide an engaging shopping trip in addition to high-quality groceries. "We strive to transform food shopping from a chore into a dynamic experience," the company says in its 10-K. Consequently, its gross margin needs to be higher, 35% of sales at last count, to profitably maintain extras like wood-burning pizza ovens, massage booths, and wine bars in stores.

The payoff for Costco and shareholders
What Costco gives up in retailing profits it gains back -- with interest -- in market share growth. It's managed between 7% and 10% higher comparable-store sales in each of the last five fiscal years, blowing away every national competitor. Costco's customer traffic has been climbing at a stellar 4% clip over that entire time.

Higher customer traffic translates into more membership fees, which are the real engine of Costco's profitability. Subscriber gains pushed fees up to $2.4 billion last year, up from $1.5 billion in 2009.

Management is so confident about Costco's growing financial strength that it recently sent a massive $5 per share dividend check to shareholders, its second "special" dividend in three years. Far from struggling because of its low price model, Costco's business is thriving because of it.