As retailing concepts go, Costco (NASDAQ:COST) and Whole Foods (NASDAQ:WFM) couldn't be more different. With its membership model, Costco's appeal centers on low prices -- and a no-frills shopping experience is critical to achieving that mission. As Costco boasts in its financial filings, "our warehouses are not elaborate facilities ... because shoppers are attracted principally by the quality of merchandise and the availability of low prices."

Costco has turned warehouse retailing into a $100 billion business.

Compare that spartan shopping environment to Whole Foods, which describes its own stores in a much different way:

We strive to transform food shopping from a chore into a dynamic experience. ... Our stores typically include sit-down eating areas, customer comment boards and customer service booths. In addition, some stores offer special services such as chair massage, personal shopping and home delivery. Others offer sit-down wine bars and tap rooms featuring local and/or craft beer and wine, creating a destination for customer gathering. We believe our stores play a unique role as a third place, besides the home and office, where people can gather, interact and learn while at the same time discovering the many joys of eating and sharing food.

Whole Foods aims to change food shopping into something more than a chore.

At the extremes, you could choose to pick your products out from pallets in a warehouse, or you could get help from a personal shopper while enjoying a massage and a glass of wine.

But make no mistake -- both concepts work well: Costco's sales have climbed to over $100 billion a year, and Whole Foods is one of the fastest-growing grocers around. Yet these two polar-opposite retailers are set to clash with each other in the category of organic foods.

Fighting for growth
The main reason for that is sales growth. At over $600 billion a year, the U.S. grocery industry is massive. But it only grew by 3% in 2012. Meanwhile, the natural and organic food subset leapt by 10% over the same period, to $81 billion.

The spiking popularity of organic food helped Whole Foods log an impressive 7%-8% same-store sales growth in each of the past four years -- almost double the pace that Kroger managed. And it has been a key factor pushing Whole Foods' profitability to a record level in the most recent quarter.

But in the growing gap between the two companies' profits, Costco sees opportunity. 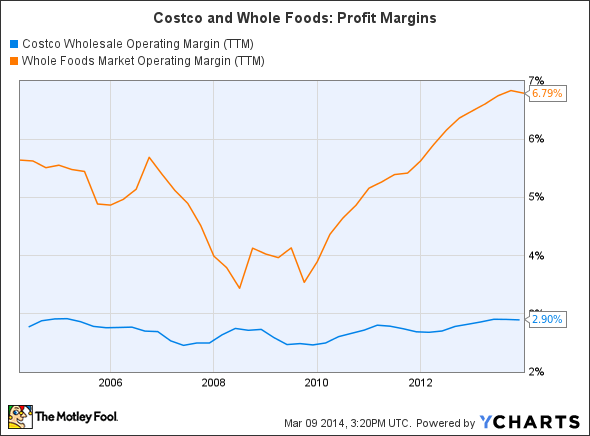 CFO Richard Galanti said in a conference call with analysts last week that Costco has a bright future ahead in organic food sales. That's because products in that category typically clock in at higher prices, giving the bulk retailer plenty of room to create value. "Whether it's organic grown beef or giant packs of kale," he said, "we can actually show a better savings on those bigger-ticket price points."

The category is also appealing, as it can help Costco attract a broader, and younger, demographic. Eighty percent of sales of a recent organic beef offering, for example, went to members who had never bought beef at Costco before.

Foolish bottom line
Whole Foods isn't blind to the pricing threat coming from Costco and other retailers. The grocer stepped up its "price investments" last quarter, which was a big reason for its surprisingly low sales growth. CEO John Mackey explained that the cuts were the "right strategic move for the company" in the long run, despite the short-term hit. And Whole Foods expects profit margins to come down off of their highs this year as it aims to compete more aggressively on price.

I think that's the right strategy. Still, as the preceding chart shows, Costco has a lot of room to gain share through pricing in the organic food business, particularly as it matures into a $100 billion market. As a sales and profit leader in the industry, some of that growth is bound to come at Whole Foods' expense.