Physician pay is high, but so is debt and dissatisfaction.

A study conducted by Medscape earlier this year sheds light on the income of physicians. The survey polled over 19,500 primary care and specialty physicians and found that primary care doctors are earning an average $195,000 annually and that specialty care doctors are making $284,000. That's a lot of money, but physicians are also working long hours and struggling under a mountain of debt, and as a result, many aren't so sure that if given the chance to do it all over again that they'd still choose to practice medicine. 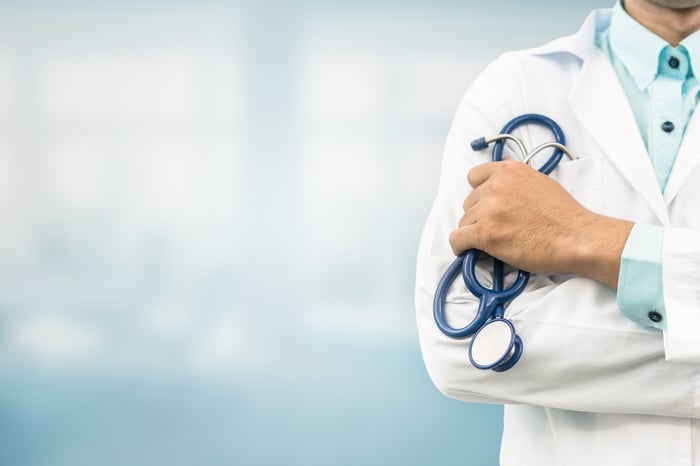 Behind the numbers
Over a lifetime, the average primary care physician will pocket roughly $6.5 million in income, or about 35% less than the $10 million that specialty physicians earn in their lifetime.

That's a lot of money, but the income ranges vary widely depending on a physician's focus.

Orthopedic doctors, or those specializing in conditions involving the muscoskeletal system, are the top income earners. Physicians practicing medicine in this specialty treat conditions such as arthritis and ACL injuries and conduct surgery, such as hip replacements. Overall, orthopedic physicians report they earn an average of $421,000 per year.

Other top income earners include cardiologists and gastroenterologists, both of whom make more than $370,000 annually. The doctors who get paid the least every year are pediatricians and physicians in family practices. In both cases, those physicians earn an average of less than $200,000 annually. In addition to the income that physicians make by treating patients, they can also earn money by providing expert witness testimony, selling products, or speaking at conferences.

More to the story
Although physicians earn big pay checks, they're also saddled with big debt, work long hours, and are often dissatisfied by their work.

Given the cost of a medical education is high and climbing, it's probably not surprising to learn that many physicians borrow a lot of money to finance their education. Overall, 84% of medical school graduates of the class of 2014 graduated with student loan debt, with 79% of those graduates owing more than $100,000 and 43% of them owing over $200,000.

Because the median amount owed by a newly minted physician totals $180,000, the AAMC estimates it will take that person 10 years of paying $2,700 per month to pay off their student loan debt. Unfortunately, the burden of student loans means that 41% of doctors are heading into their 40's still making their student loan payments. Paying off student loan debt may also be one reason why so many doctors are logging work week's that are far north of 40 hours. For example, nearly a third of all primary care physicians put in more than 45 hours per week at their job.

The combination of a mountain of debt and long hours could explain why Medscape finds that only 64% of people would choose medicine and just 45% of doctors would pick the same specialty again, if given a choice .

Tying it together
Physician pay is high and varies widely by specialty and that likely attracts many people to study medicine. However, physicians also work long hours and take on burdensome levels of debt and that leads many of them to question their calling.

Overall, while dissatisfaction is widespread across physicians, one exception appears to be primary care doctors. According to the survey, despite family doctors being among the lowest income earners and logging long hours, they're also the most willing physicians to choose medicine again -- further proof that a big paycheck, while important, isn't everything.