Even though Costco Wholesale (NASDAQ:COST) has had very impressive sales growth over the past decade and continues to increase traffic to its stores, no bricks-and-mortar retailer is completely safe from the changing retail landscape toward online shopping. It's reasonable to question whether Costco can stay competitive against other companies offering the same low prices, as well as free two-day shipping, since Costco's own online presence is relatively small.

Costco has increased traffic to its physical stores by about 4% in each of the past six years and is increasing its total number of locations worldwide. Meanwhile, Costco's online sales increased 20% last year, but represent only about 3% of net sales.

A changing retail landscape
In the most recent 10-K, Costco management notes, "If we do not successfully develop and maintain a relevant multichannel experience for our members, our results of operations could be adversely affected." The retail landscape is clearly changing and increasingly going online. U.S. e-commerce sales went from around 4% of total retail sales in 2010 to over 7% in 2015, according to the U.S. Census Bureau. 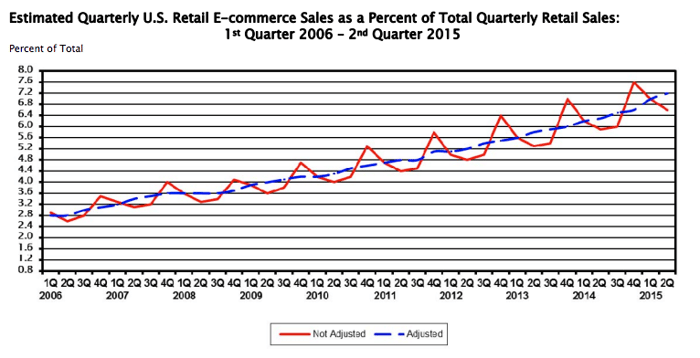 Even if online shopping is a small part of Costco's overall business right now, this channel represents a great opportunity for further growth. Costco's online sales increased 20% year over year in FY 2014, to $3 billion. While this represents only about 3% of the company's net sales, increasing online sales is low-hanging fruit that could have a big impact on short-term and long-term profits.

How Costco online will increase profitability
Other than staying competitive in a more online and mobile world, Costco also has the ability to increase its margins by expanding its online presence. The fixed costs of rent, energy, employees, and the like at physical locations puts a strain on operating margins that are already razor thin for Costco since it seeks to keep product costs as low as possible. Costco makes its money from membership fees. Costco's operating margin is slowly improving, but it's still well below most other comparable retailers at just over 3%. 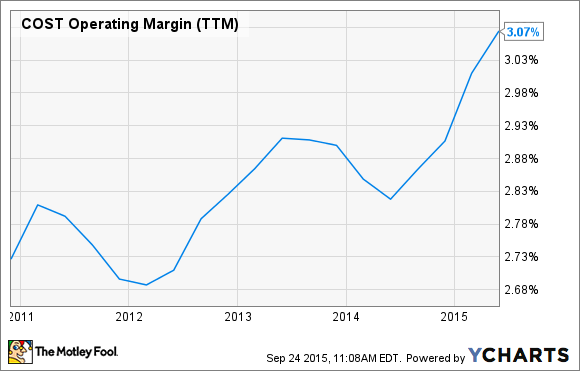 Since products purchased online have far fewer fixed costs, more of the sale goes to the company's bottom line. Increasing the percentage of Costco sales made online instead of in-store could have a meaningful impact on net income as Costco's operating margin continues to grow.

Costco's digital investments
"Multichannel retailing is rapidly evolving, and we must keep pace with changing member expectations and new developments by our competitors," says a statement from Costco's 2014 10-K.

Costco has recognized that its members are using computers, tablets, and mobile phones to compare and shop online. To stay relevant with these consumers, Costco is increasing its investment in its digital infrastructure. Costco's technology has been getting an upgrade over the past few quarters, apparent in the rise in Costco's SG&A expense related to IT upgrades. While the company hasn't said what all of those upgrades are yet (home delivery for food samples and $1.50 hot dogs?) we should start to see some of that pay off soon.
Costco is also preparing to roll out online shopping in more countries. Even though Costco operates stores in nine countries, it only offers online sales in North America and the U.K. The company is working to expand its online footprint further, even to countries it doesn't have physical locations in, such as China.
Does Costco need to be online to be competitive?
Costco is still growing both sales and physical traffic and may not need online sales to be competitive right now, but increasing its e-commerce presence will help it to stay competitive in an increasingly e-commerce-focused market over the long term. And it's not just a long-term advantage -- as Costco continues to make investments in its digital infrastructure and expand the service internationally, online sales should continue growing rapidly, which will increase Costco's total sales as well as operating margin in the short term.
This article represents the opinion of the writer, who may disagree with the “official” recommendation position of a Motley Fool premium advisory service. We’re motley! Questioning an investing thesis -- even one of our own -- helps us all think critically about investing and make decisions that help us become smarter, happier, and richer.