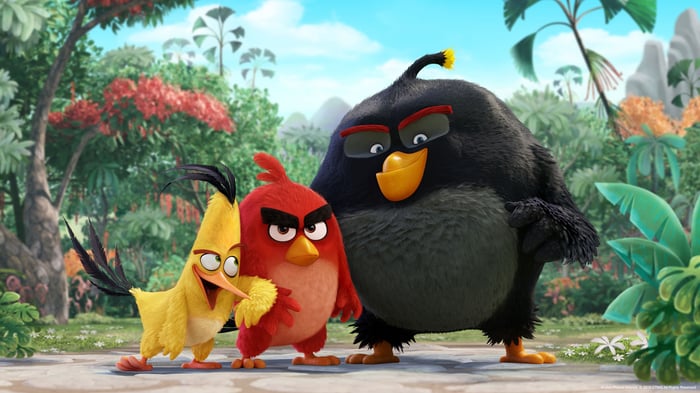 For a studio that tends to produce enough quality pictures to place in the top four among U.S. box-office earners, lately Sony (NYSE:SONY) has found itself struggling to find franchises. The Angry Birds Movie isn't likely to change that, unfortunately.

Explosive competition and a dud of a category
You wouldn't think so, given the recent success of animated movies. Universal's Minions earned over $1.1 billion worldwide despite mediocre reviews tracked at Rotten Tomatoes. Disney's (NYSE:DIS) Inside Out scored much higher approval ratings on the way to tallying $774.5 million worldwide. Why wouldn't The Angry Birds Movie do at least as well?

There's certainly a chance that it does, but history generally hasn't been kind to films based on video games. Box Office Mojo has 35 such features earning $1.17 billion in domestic grosses, a far cry from the $15.7 billion amassed by computer-animated films. This, in a nutshell, is why Sony pitches The Angry Birds Movie as a fun animated epic rather than a video-game adaptation.

But don't take my word for it. Shortly after securing the rights two years ago, Sony issued a press release that talked as much about Angry Birds in other media as it did the popularity of the video game when describing the market for the forthcoming movie: "Paving the way for a full-length feature film, Angry Birds Toons has been a massive success for Rovio, clocking in over 150 million views from the Angry Birds apps alone within the first six weeks."

Since, Rovio Entertainment has produced 78 episodes of Angry Birds Toons, resulting in over 4 billion views. Yet it may not matter. The Angry Birds Movie is set to be released just two weekends before Captain America: Civil War and faces nearly immediate competition from Alice Through the Looking Glass and X-Men: Apocalypse. Sony is going to need a lot of positive buzz to get moviegoing audiences to choose Red, Chuck, and Bomb over Cap, Alice, and Marvel's mighty mutants.

So far, only 89.1% of those to have rated the teaser trailer on YouTube give it a thumbs up -- about on par with recent results for the 21st Century Fox (NASDAQ:FOXA) dud Fantastic Four.

Why this matters
If there's good news for Sony investors, it's that Rovio is taking a big portion of the risk by producing The Angry Birds Movie despite job cuts and flagging profits.

Sony's role is limited to "exclusive worldwide distributor," putting it on the hook for marketing and distribution costs in exchange for a share of any box-office outperformance. The studio should also collect a healthy portion of home video sales. In each case, Sony gets to participate in upside if The Angry Birds Movie proves to be a franchise-starter, but without risking too much upfront.

A few more deals like this, and Sony Pictures may once again become a catalyst investors can bank on, like during the early days producing and distributing Spider-Man movies.

Are you looking forward to The Angry Birds Movie? Do you think it'll be a big earner for Rovio and Sony? Why or why not? Tell me on Twitter or reach out on Google Plus. I may use your comment in a follow-up article.