Please ensure Javascript is enabled for purposes of website accessibility
Free Article Join Over 1 Million Premium Members And Get More In-Depth Stock Guidance and Research
By Demitri Kalogeropoulos - Oct 4, 2015 at 11:22AM

Sales growth appears to be slowing as we head into the critical holiday shopping season.

What: Shoe retailer Wolverine World Wide ( WWW 2.46% ) saw its stock plunge by 20% during the month of September, according to S&P Capital IQ data. The dip has left shares down over 25% year-to-date compared to a 5% decline in the broad market. Longer term, Wolverine shareholders are now trailing the market by over 20 percentage points over the last five years. 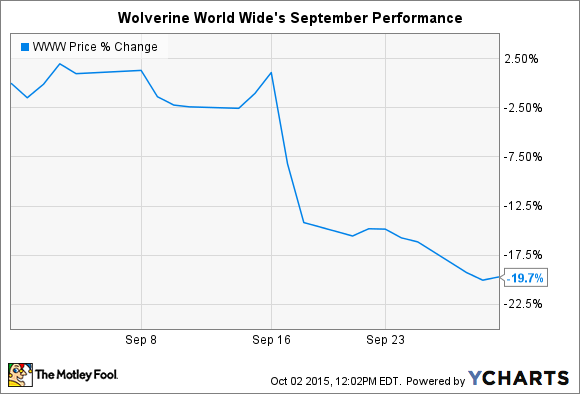 So what: Last month's stock slump came after Wolverine, which owns a portfolio of footwear brands including Keds, Merrell, and Hush Puppies, pre-announced disappointing details about its upcoming third quarter results. Management on Sept. 16 affirmed its original third quarter profit guidance, saying it still expects to earn $0.48 per share compared to $0.63 per share in the year-ago period.

However, sales growth is now expected to have hit a wall. Back in July, the company projected a revenue boost in the "mid-single digits" this quarter. But now it believes it will endure a "low-single digit" sales decline. By comparison, Wolverine posted 4% sales gains though the first half of the year.

It's not clear exactly why Wolverine's products are underperforming management's expectations at the moment. The shortfall could involve anything from weak demand for new launches in the Merrell or Sperry brands to surprisingly low sales to Wolverine's warehouse clients. But a growth outlook downgrade is never good news for an apparel retailer, particularly heading into the fourth-quarter shopping season.

Now what: The company is due to post its full third quarter earnings results on Oct. 20. Wall Street analysts see revenue coming in at $695 million, down 3% year-over-year. But investors won't be as concerned with that small slip as they will be with management's updated guidance for the critical fourth quarter.

Three months ago, executives forecast a "very strong" revenue performance for the holiday quarter. But given the surprising recent sales dip, that estimate might be revised lower when we next hear from the company in just a few weeks.