The first reaction that almost every investor has when they see a company's dividend or distribution yielding more than 10% is "what's the catch?" It's a good reaction to have, because the chance of finding a company that truly has a sustainable yield in the double digits are as good as finding a unicorn that shoots laser beams out of its horn.

So when you look at a company like Calumet Specialty Products Partners (NASDAQ:CLMT) it's good to view that near 11% yield with a healthy dose of skepticism. After all, it was only a year ago when Calumet's financials didn't look that robust. So let's take a look at how the plunge in oil prices has affected the bottom line for Calumet and whether its distribution yield is as intimidating as it sounds.

We've come a long way from $100 oil
Oil refiners and chemical manufacturers are like a natural hedge to oil prices. As oil prices go down, their cost of goods sold declines and can help to boost margins. So as you can imagine, the decline in oil prices has helped Calumet's margins. What makes Calumet unique, though, is that a much lower percentage of its sales comes from fuels like gasoline or diesel compared to other refiners. Over the past 12 months of quarterly revenue, less than 60% of the company's total sales came from fuels and asphalt, whereas many of Calumet's competitors generate more than 90% of their sales from this segment. 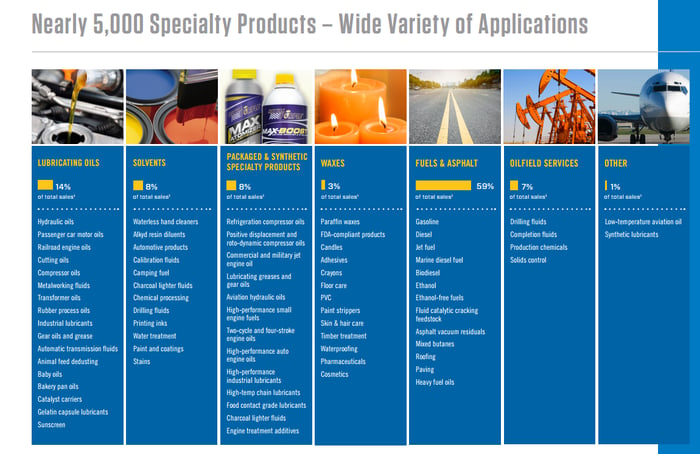 The reason this is important to Calumet is because many of the prices for its non-fuel products do not see the price swings that we see with fuels. So a decline in oil prices can lead to fantastic per barrel margins for some of its specialty products.

Keep in mind, though, that this can cut both ways. If oil prices rise, specialty products prices may not necessarily react as much as fuel prices do and it could cut into margins. For now with oil prices where they are, though, it's hard to argue with the results as of late. Total adjusted EBITDA for the first half of the year of $219 million is almost double what is was in the first half of 2014.

Better margins means better financials, sort of
Not only is Calumet unique in the sense that it operates in a rather unique space within the refining space, but it also happens to be a master limited partnership that distributes a generous amount of cash to its shareholders at a pretty regular rate. Aside from a sizable distribution cut back during the finanical crisis, the company has paid a pretty steady distribution. 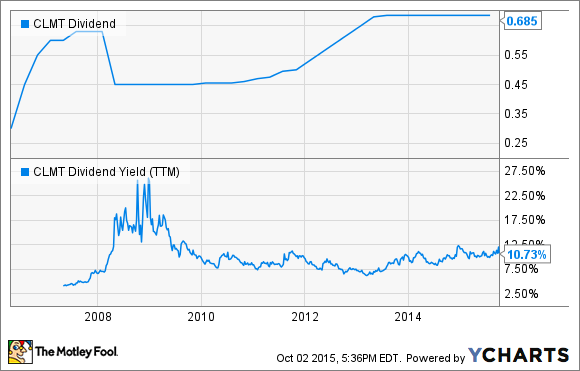 The other aspect of the financials that looks much better as a result is the company's leverage ratio. Basically, its total debt outstanding divided by EBITDA. This time last year Calumet's leverage ratio was a ghastly 7.4x, but now is in a much more comfortable range of 4.3x, below the magic number of 4.5x that many lenders use as a gauge of credit worthiness.

The company has grown its earnings from some recent capital investments coming online and reducing some non-oil related costs over this time, but the major factor here has been lower oil costs. In the event that we were to see a major increase in oil costs again, it has the potential of negating many of the gains the company has seen over the past year.

What a Fool believes
It's amazing what a year of declining oil prices can do for a company's prospects. Many shale producers in the US looked like veritable ATM machines less than a year ago and Calumet looked like it was in a bit of financial trouble. Today, with plenty of cheap oil to choose from, Calumet looks immensely better than it did a year ago.

At today's prices, Calumet looks like its better than 10% yield could hold up. But the key phrase there is "at today's prices." For anyone that is looking at investing in Calumet over the very long term, you may want to see if some of the operational cost cuts and capital expenditures are enough to generate cash flows at higher oil prices. If so then Calumet looks like a very interesting way to play the refining space. If it can't, though, then perhaps its best to remain skeptical of that very generous yield.