Odds are you have managed care -- but do you understand it?

If you live in the U.S. and have health insurance, there's at least a 75% chance that you're part of a managed care program. Despite this tremendous reach, however, many Americans don't have a solid understanding of what managed care is. Here's what you need to know about this pervasive part of the U.S. healthcare system.

The big picture
At its core, managed care is about money.

Increasing healthcare costs aren't a new concern -- over four decades ago, people worried about medical inflation. Discussions about how to control the growth of healthcare costs during the Nixon Administration ultimately led to passage of the Health Maintenance Organization Act of 1973, which ushered managed care into the U.S. in a major way. 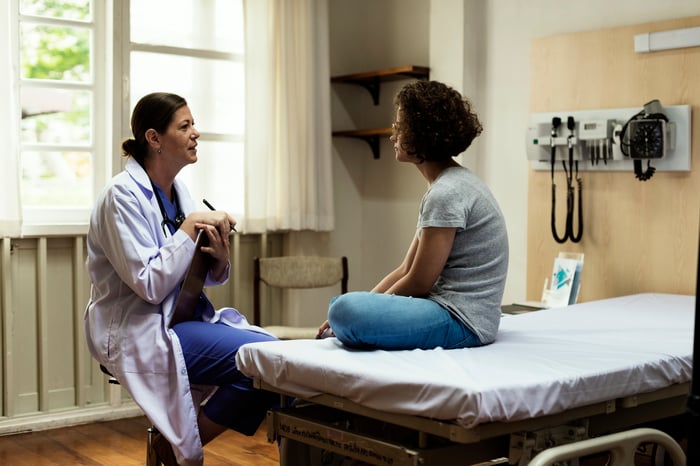 Proponents of managed care saw several opportunities to control healthcare costs. One key way is the establishment of provider networks. To become a member of a network, providers have to meet specific quality standards and agree to pricing arrangements that lower overall costs.

Instead of the "if it ain't broke, don't fix it" mentality, managed care focuses on preventive care as a strategy to lower healthcare costs. Physician checkups and age-based screening for various diseases are important to identify potential health problems early -- before the costs of treatment become greater.

Managed care plans also often emphasize financial incentives for members to control their own healthcare costs. One widely used example of this is tiered pricing for prescription drugs. Members pay less for generic drugs than they do for branded drugs. 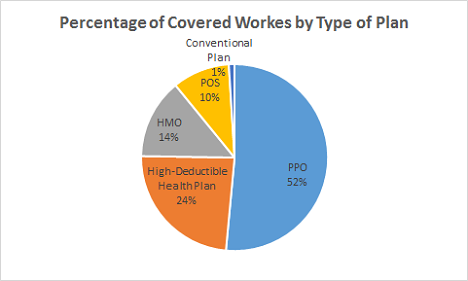 HMOs tend to be the most restrictive type of managed care. They frequently require members to select a primary care physician, from whom a referral is typically required before receiving care from a specialist or other physician. HMOs usually only pay for care within the provider network.

PPOs allow members more flexibility than HMOs do. These types of plans usually allow members to receive care out of network, but the member must pay more than if they use a network provider. This flexibility has made PPOs popular, although premiums for PPOs are typically higher than those for HMOs.

POS plans offer a middle ground between an HMO and a PPO. Like HMOs, POS plans usually require members to have primary care physicians. Like PPOs, POS plans allow members to go out of network for care -- although they must pay more than they would for a network provider. Premiums for POS plans are usually higher than those for HMO plans.

Does managed care work?
Opinions vary greatly about just how effective managed care actually is. Opponents point to high overhead costs at large HMOs and lower quality scores as signs that managed care doesn't work well. But, as the old saying goes, "perception is reality". And the perception of insurers and employers seems to be that managed care controls costs better than healthcare that isn't managed.

The pie chart shown earlier paints a picture of how widespread enrollment of U.S. workers in managed care plans is. Even that picture might not tell the full story: a significant portion of the 24% of workers in high-deductible health plans also likely have some type of managed care -- provider networks, for example.

Another big indicator that managed care has enjoyed success is the performance of the stocks of health insurers that have heavily focused on managed care. Take a look at how three of the largest U.S. health insurers -- UnitedHealth Group ( UNH 0.74% ), Anthem ( ANTM -1.19% ), and Humana ( HUM 0.06% ) -- have fared over the last 14 years compared to the S&P 500 index. 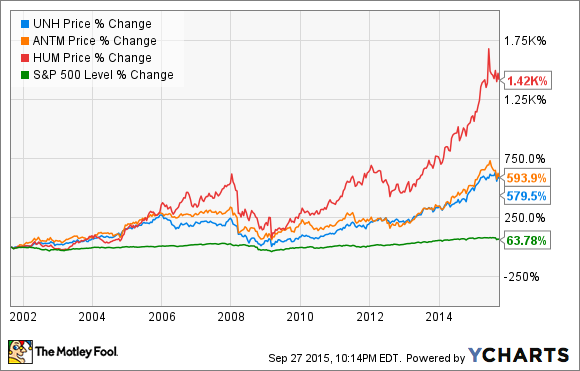 The future of managed care
Expect managed care to become an even bigger factor in Medicare and Medicaid. As more Americans age, federal and state governments will become even more desperate to find ways to control healthcare costs. The three large health insurers mentioned previously all stand to benefit from this trend.

UnitedHealth generates more revenue from its Medicare & Retirement business segment than any other outside of its Optum business unit. Medicaid represents the company's fastest-growing business in terms of individuals covered.

Anthem makes more than half of its revenue from its Government Business unit, which includes Medicare and Medicaid plans. Like UnitedHealth, Anthem's biggest membership growth comes from Medicaid -- with nearly 20% year-over-year growth reported last quarter.

When it comes to Medicaid growth, though, Humana wins among the three with a year-over-year increase of more than 110% in Medicaid membership last quarter. Medicare is also enormously important to Humana, accounting for nearly 85% of total premium revenue.

Outside of these government programs, managed care's role in healthcare could change. Increasing numbers of employers are shifting workers to high-deductible health plans, moving more costs to employees. The portion paid by insurers, though, will likely continue to include elements of managed care.

Managed care appears to be here to stay in one form or another.

2 Unstoppable Stocks That You Can Buy and Hold for Decades

Should You Buy This Mega-Cap Health Insurer Now?

1 Reason Vaccine Mandates Might Work Better Than You Think